One of the strengths of Doctor Who has always been its capability to surprise yet many who regularly watch it prefer things to continue as they are. Change of any kind, whether a new Doctor, companion or even title sequence is generally greeted with a mixture of disappointment or outright hostility. This 80 minute long introduction to the latest Doctor may well confuse rather than confirm people’s expectations as the entire tempo seems to have changed. Like it or not we’ve become accustomed to a frenetic pace of events which seemed to speed up even more when Matt Smith took over. `Deep Breath` on the other hand lives up to its name, slowing proceedings down several notches to allow the story room to, well, breathe. Online reaction so far seems comparatively muted as if people are finding it hard to assimilate this change of tone. Fans seem not to have taken to it, after a year of saying how brilliant they think Peter Capaldi will be but that’s fans for you.
WARNING- SPOILERS PAST THIS POINT 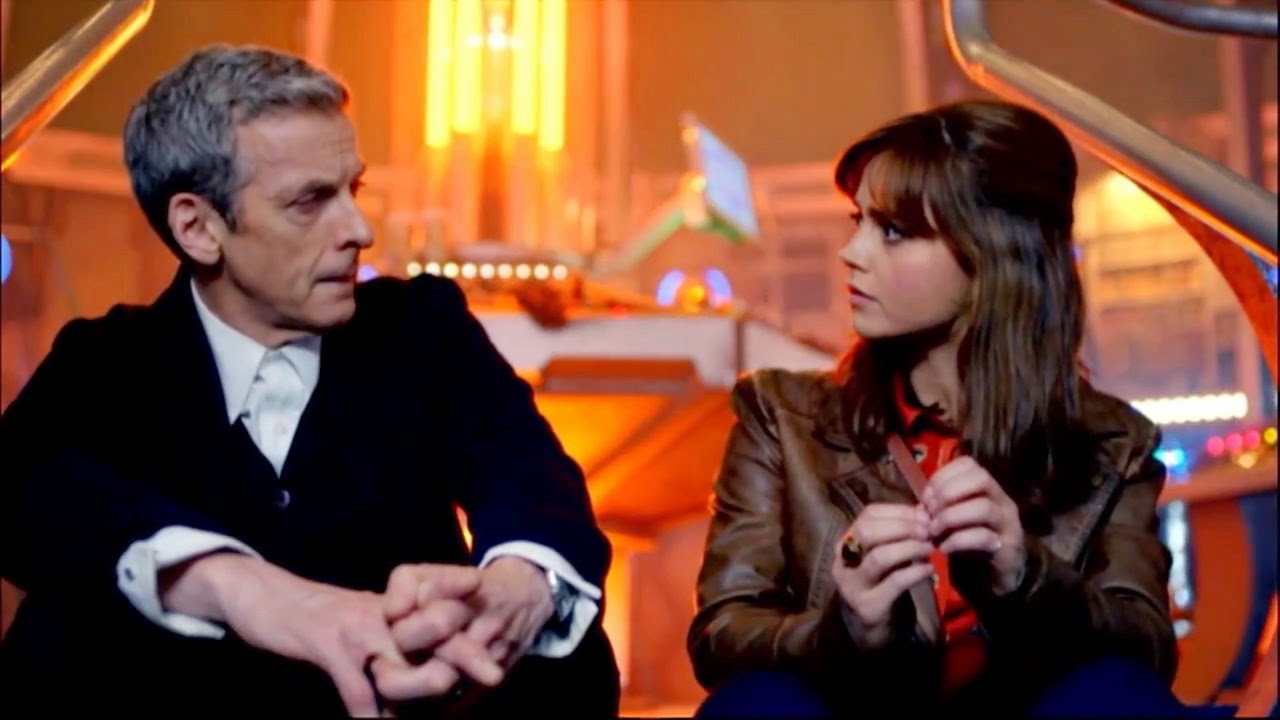 Considering it’s penned by Steven Moffat the plot of `Deep Breath` is very simple and linear. Androids related to those in `The Girl in the Fireplace` have been stuck in London for centuries continuously replacing worn out parts with human tissue. Over time they have started to become less robot and more human in a sort of flipping of the Cybermen idea. When the new Doctor ends up in Victorian London with post regenerative trauma the two scenarios inevitably collide. Of course like any new Doctor story the plot is secondary to establishing the new incarnation.
It is noticeable from the start that the episode canters along at a discernibly different meter than any episode since 2005. We’re not quite back to the 1970s pace but it’s not far off. The second thing that soon becomes apparent is how glorious the chemistry is between Peter Capaldi and Jenna Coleman. Reminiscent of how Lis Sladen only really found her place when Tom Baker arrived, so Clara suddenly blossoms across this episode with Jenna Coleman really showing off her considerable acting chops in a manner she’s not been able to during the whole impossible girl storyline. It is by far her strongest performance in the series to date. It’s delightful to watch her reacting against the new spikier Doctor with bewilderment and doubt. The scene where they verbally spar in Mancini’s restaurant is especially good.
As for the new Time Lord himself he is written and acted with intelligence and a distinctly alien quality that the post 2005 series has rarely tapped into. Stripped of all the whirling gimmickry of his predecessor – though there are some Matt Smith notes in his initial scenes, probably deliberately- Peter Capaldi makes a formidable debut though is gifted with dialogue that really suits the actor. Steven Moffat does seem to have taken note of recurring criticisms over the trivialisation of the character, that he was becoming no more than a wise cracking gag machine who solves matters with a wave of his sonic at the end. This Doctor seems content to be serious when need be and Capaldi as we know is far better at doing serious than Smith was.
Of course the gravitas is lightened by some witty dialogue and the occasional hint- just as Tom Baker does in the role- that there is kindness and compassion under the harsher surface. I suspect younger viewers will miss the more modern warmth and funny Matt Smith-isms though that is not to say the new Doctor is cold. Near the end there’s a lovely scene in which Clara, just reassured by a surprise phone call from the past, turns back to the Doctor who pleads with her to see him as he is. It’s premature to judge any Doctor on their first episode yet by the end he shows a presence unseen in the lead role since around the late 1970s. 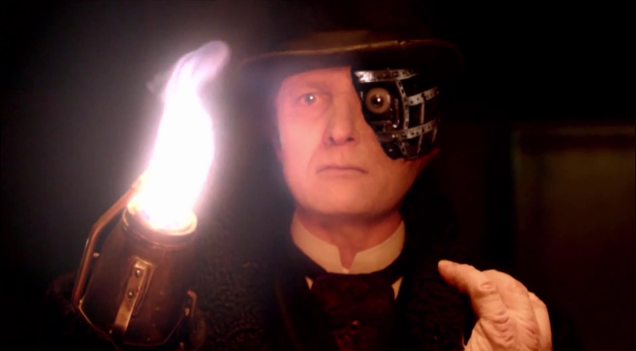 Apart from the younger end of the audience losing a more identifiable Doctor, some of the themes and imagery of this episode go probably as far as the series can these days. The main villain known as the Half Faced Man sits at the more gruesome end of the scale and is very effective at giving us the scares. Perhaps having him try to escape at the end in a balloon made of people’s skin is a step too far though it may well be that the children have nodded off by then unused to the pace! Some of the dialogue probably pushes beyond the `mild innuendo` mentioned on the cinema certificate slightly too far. Visually too the look is more adult than child orientated with the big belching dinosaur seeming as out of place structurally as it does fictionally.
Appearances are very much the theme of the episode with the Doctor’s attempts to get used to his new face mirroring the android’s replacement of their appearance. When he holds up a tray to show the Half faced Man what it has become, the Doctor looks more surprised by his own reflection. One of the stand out scenes also has the Doctor nattering to a tramp about his appearance and there’s also a funny reference to an angry mirror. Clara is off put by the Doctor’s new fact and attitude; this aspect of the episode is written especially well proving a different sort of reaction to that of previous companions in this situation. This is something that perhaps the older viewers will identify with, especially if you’ve known anyone disfigured in an accident or growing very old. This is what Clara is dealing with and it is to the episode’s credit that the issue is never shoved aside after a few zany outbursts. In that sense it is the most mature take on regeneration the show has attempted.
There were a few things I didn’t care for. Three goes in and they still don’t seem to be able to make a decent title sequence; this one is big on cogs, clocks and planets but somehow does not, so far anyway, reflect the tone of the new approach. Also I could have done without Mary Poppins at the end. I’d held my own deep breath that we were to be left to enjoy some adventures for their own sake but the hilariously named Missy appears to suggest another annoying arc plot bubbling. Not everything, it seems, is changing.
Still, `Deep Breath` feels like a massive change from the past three years, as if a whole new team had come in. These days it is hard to separate the creative from the commercial and even trickier to know if this more acerbic Doctor will capture the public’s imagination. However this is an atypically long episode and a post regeneration one at that so it is unwise to draw too many long term conclusions. Best to look at it as an intelligent, dark, rewarding yet unusual introduction to a new Doctor.
Posted by John Connors at 16:29