A Very Peculiar Practice Season One

Quite often odd settings inspire good TV dramas and in the mid-1980s Andrew Davies created a series set in the Doctors’ surgery of a university, What at first seems an anomalous place for a drama proves to be a rich provider of stories surrounding both the personal and political travails of the place itself as well as Britain at the time. Though broadcast in 1986 the backdrop is more reminiscent of the earlier part of that decade with its economic cuts on the one hand and bold future plans on the other. Watching in 2014 there is more than a whiff of familiarity about all of this which shows that in some respects things have not changed that much in nearly thirty years. 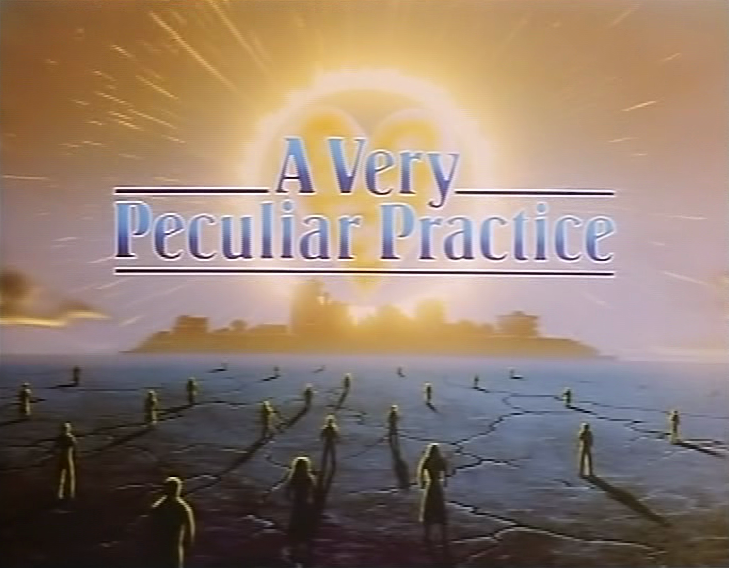 Peter Davison- then television actor de jour- is Doctor Stephen Daker the recently divorced and overwhelmingly polite practitioner whom we meet on his first day at Lowlands University, a grey maze of tall indistinguishable buildings. He is so gauche and apologetic that he spends much of the perfectly titled opening episode `A Long Way from Anywhere` being mistaken for a student, a gag that also underscores how some of his new colleagues are rather out of touch. Davison plays this sort of role so well and it was probably second nature to him by the time he made this. It allows us to like him and explore the strange new world from his perspective. Daker will fumble his way through the seven episodes gradually becoming more confident yet never developing the self-centred attitudes of the other Doctors who between them are a riot of colourful contradictions.
There’s the character most remembered Bob Buzzard played with eager flippancy by David Troughton. Buzzard is like a child, full of opinions, bang up to date but always going too far. He almost worships new technology (which at the time involves computers and floppy discs) belittles women and colleagues while he is personally ambitious.  Then there’s Rose Marie, a liberated feminist who isn’t afraid to use flirting as a weapon. Played by Barbara Flynn she is calm, measured and alluring in the face of the other’s extreme behaviour. Head of the practice is Jock McKinnon a bellicose heavy drinking Scotsman given gravitas by Graham Crowden’s lively portrayal. He gets some of the best lines and is rarely seen outside his office or without a whisky in his hand.  At times it doesn’t matter what the series is about, just watching these four actors delivering what for each is a peach of a role is enough in itself.
So what is the series about? It seems to be drawing a parallel with what was going on during the early/mid 1980s in the wider country. We’re in the era of Margaret Thatcher’s obsession with personal wealth and status where money became the motivating engine of a country pulling itself out of recession. This bred a survival of the fittest mentality which the series grapples with in the last episodes as the university is faced with cuts and redundancies.  Some if it could have been written this year!
The series also deals with issues that existed within education at the time; there are lots of seemingly throwaway lines about the merits of some courses and a vice chancellor whose ambitions seem geared more towards the status of the institution than what is actually the best for students. Each faculty is seen as being forced to make money rather than just educate students though.
Yet the series is also just as much about personal politics and behaviour.  Stephen ends up in an interesting relationship with researcher Lynn Turtle who at first seems to view him as some sort of experiment a path he willingly agrees with. While showing that old fashioned attitudes towards women still prevail- as often expressed by Buzzard – Davis creates two interesting female characters to offer a more enlightened review yet he doesn’t make them clichéd feminists. Both Rose Marie and Lynn in their respective plotlines never have to behave like men to match their male colleagues and prefer an intelligent approach. You certainly have a sense that Rose Marie is the most pragmatic of the four Doctors.
The season’s best episode plays out the clash between the personal and political arguments especially well focussing on the threat of closure hanging over the only all women’s college. The vice chancellor- rather splendidly named Ernest Hemingway and played with weaselly conviction by John Bird- wants to demolish the place to make way for a new science park to be financed by Japanese money. The occupation that is organised as a response to this ends with Hemingway’s consternation and a lecture full of pointed barbs and clever pot shots delivered by the eccentric but highly intelligent faculty head. It’s a very feminine resolution far removed from the male bluster we’ve seen.
The series balances on the cusp between out and out comedy and a darker vision of 1980s Britain. The visual jokes such as the recurring duo of misbehaving nuns foraging through bins and joyriding pepper a narrative that retains an optimism however dark things get. Davies may present maverick Doctors but when they’re needed- such as one episode when there is an outbreak of STDs - they deliver and make things better.
Is much of their cynicism more gallows humour than dislike of the patient? Daker’s opening speech in which he hijacks Jock’s own previously expressed mantra “we love you, that’s why we’re here” hints early on that this is not a series in which the characters will crumble or if they do, it will be with frenetic amusement rather than tragic consequences. His message seems to be, for all that befalls us, we (and the country) will muddle through. In that respects it’s a vision of a very English practice where peculiarities are tolerated even encouraged.
At times it does seem a tad dated, though this is as much to do with the production values than the quality of the series itself. The use of the then standard indoor video/ outside film technique of the time betrays that it was filmed between terms. Rarely can a university campus have been so empty during term time! Some of the acting lists towards the edge of melodrama and the incidental music has an intrusive very 1980s sax n’ synth feel.
Yet this is a rich series that has not dated as much as many of its contemporaries; armed with Andrew Davies’ cerebral dialogue it can’t fail.
Posted by John Connors at 19:35