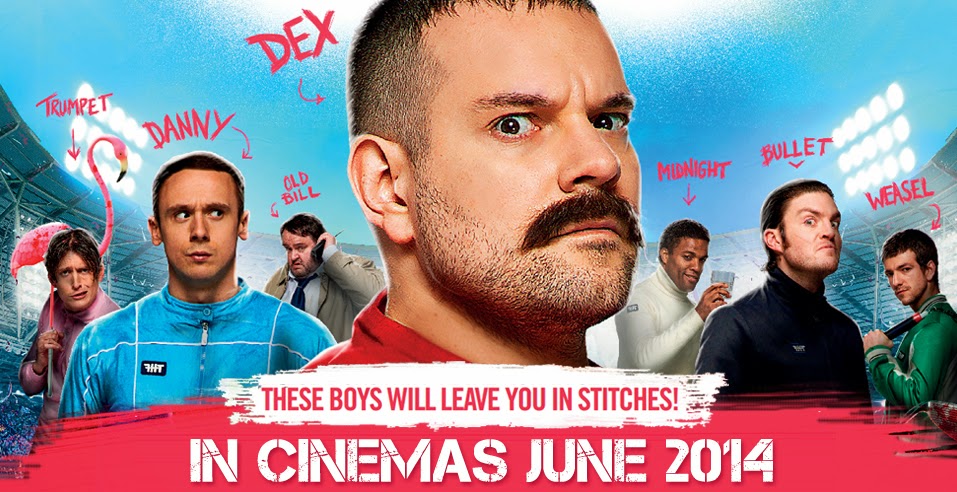 We open – perhaps predictably - with Danny Dyer though this is a red herring because is gone within minutes in a scene that sets the tone for what is to follow; rather than struggle to fill each minute with a gag, the narrative creates a story and delivers a series of funny riffs on the London mob / hooligan culture which has been the subject of many a movie these past couple of decades.
The story centres on Danny, an out of work twentysomething who finds himself homeless when his grandfather chucks him out. Then he meets Dex, recently released after many year’ s incarceration  (the film is deliberately vague on dating)  and who is now looking to re-establish his credentials as the country’s number one football hooligan. Ultimately he wants revenge against a rival called The Baron who was responsible or his son’s death. He takes the enthusiastic Danny under his wing almost as a surrogate son introducing him (and us) to his old gang.

Writers Michael Lindley and Nick Nevern cannily use the shape of a serious film to develop the plot beyond the confines of the genre so it becomes a story of a noble struggle. Dex’s gang are a lively, bunch with silly nicknames, exaggerated personas and ridiculous posturing (while working in florists during the day!) and in his director’s hat Nevern adds a triumphalism to their behaviour while continually undercutting with sight gags. It’s something to be impressed by when such violence can also be funny.
Some running jokes continue to deliver throughout such as the fact that nobody except Danny realises a bloke called Old Bill is an undercover cop.  There are sprinkles of accomplished physical comedy too; a gag involving a post box is spot on, one confrontation has an unexpected development  and there are a few quite brutal moments that are nonetheless laugh out loud funny. The introduction of the old gang is achieved with an impressive tracking shot and great narration introducing everyone.
The performances hit the right note played straight to achieve the necessary humour. Dex is played by Nick Nevern (yes, he’s busy!) as a simmering type with few words and threatening demeanour though the film will amusingly puncture his self -importance several times. Having appeared in a number of Brit flicks of the last decade Jason Maza who plays Danny knows the territory but here confirms he is also an adept comedic actor too. His reactions to the goings on around him are funny in themselves. Amongst the gang familiar faces include Tom Burke having fun as the ultra -brutal Bullet sneering his way through proceedings, Ray Fearon as smoothy Midnight who has clearly been playing away with Dex’s wife, Morgan Watkins as the hyperactive coke fuelled Trumpet and Joseph Altin as the weaselly Weasel. The film is almost stolen though by Stephen O’Donnell’s laconic Old Bill.
The film manages to weave a decent story together in a manner that most spoofs can’t quite manage. There’s a definable arc in the relationship between Dex and Danny and a good if familiar take on revenge and rivalry that stays alight till the end. The scriptwriters are sure to always pull any comfortable rug away at the last moment so that the results remain hard edged but with a sympathetic centre ensuring The Hooligan Factory hits as many right notes as its characters hit each other!