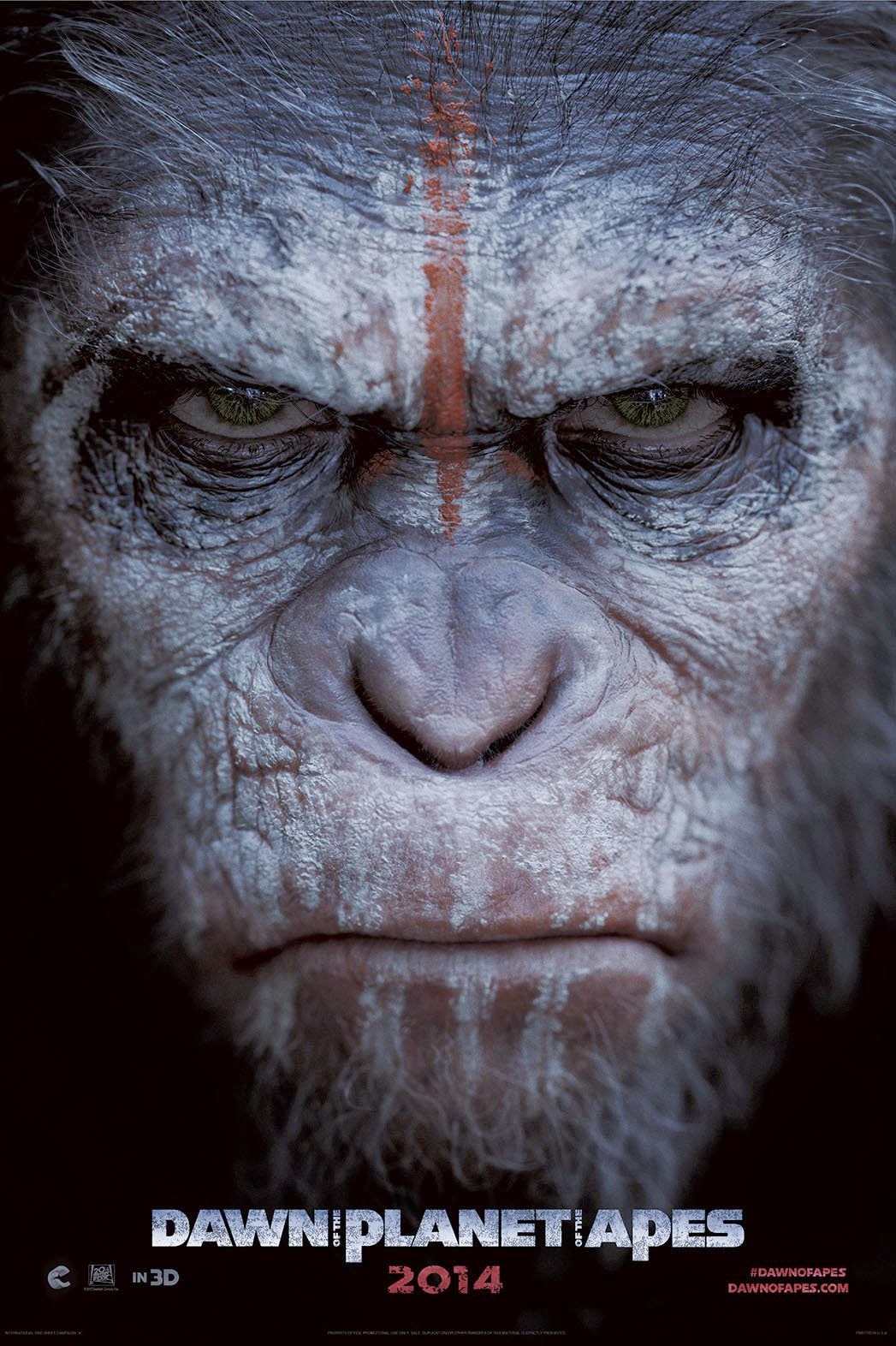 Spoiler warning- if you haven’t seen the film yet this review reveals major plot points
The two groups clash when the humans need to re-start a dam deep in the territory the apes have claimed, to provide power, the city’s generators having been exhausted,. So there plays out an uneasy agreement that some apes and humans do their best to undermine. If matters seem a tad slow at first it is necessary groundwork before the powder keg explodes.
Much of the debate around this film has centred on the issue of the performance  capture technique. Once used as a guide for animation, it now involves the actors themselves delivering a performance wearing bodysuits covered in sensors which is then overlaid with computer generated masks, fur etc. It is the most remarkable cinematic development since we gaped in awe at the dinosaurs in Jurassic Park but it seems some do not consider these actors- and they are actors – eligible for award recognition as such. This is ridiculous when you think that they are delivering on two levels; not only performing as an actor but also moving as an ape. I would be very, very surprised to see any actor give more to a film than both Andy Serkis and Toby Kebbell do in this film.
A pioneer and now veteran of the technique Andy Serkis has delivered once again; this Caesar is older and more considered. He mulls over decisions, his human and ape elements fusing together. With minimal dialogue so much relies not just on the face but also the body. Yet it is an acting role by any definition; those are Serkis’ eyes and face discernable if you know what he looks like. However here it is by Toby Kebbell’s incredible performance as Koba that edges ahead
Initially Caesar’s loyal, battle scarred lieutenant Koba remains bitter and untrusting because of his mistreatment by humans. Koba is a proper five star film villain, indulging in an increasingly vicious betrayal yet for reasons we clearly understand. When he resorts to shooting Caesar himself then framing the humans it is a gear change that elevates the film to a new level of tension. Kebbell gives Koba such a dangerous presence yet surprises too when the character’s deference is required. There are also a couple of amusing scenes when he pretends to be a dumb ape. Where it not for the technical controversy surely both actors would be deserving for Oscar nomination; if he were a human character Kebbell would be a cert for best supporting actor. 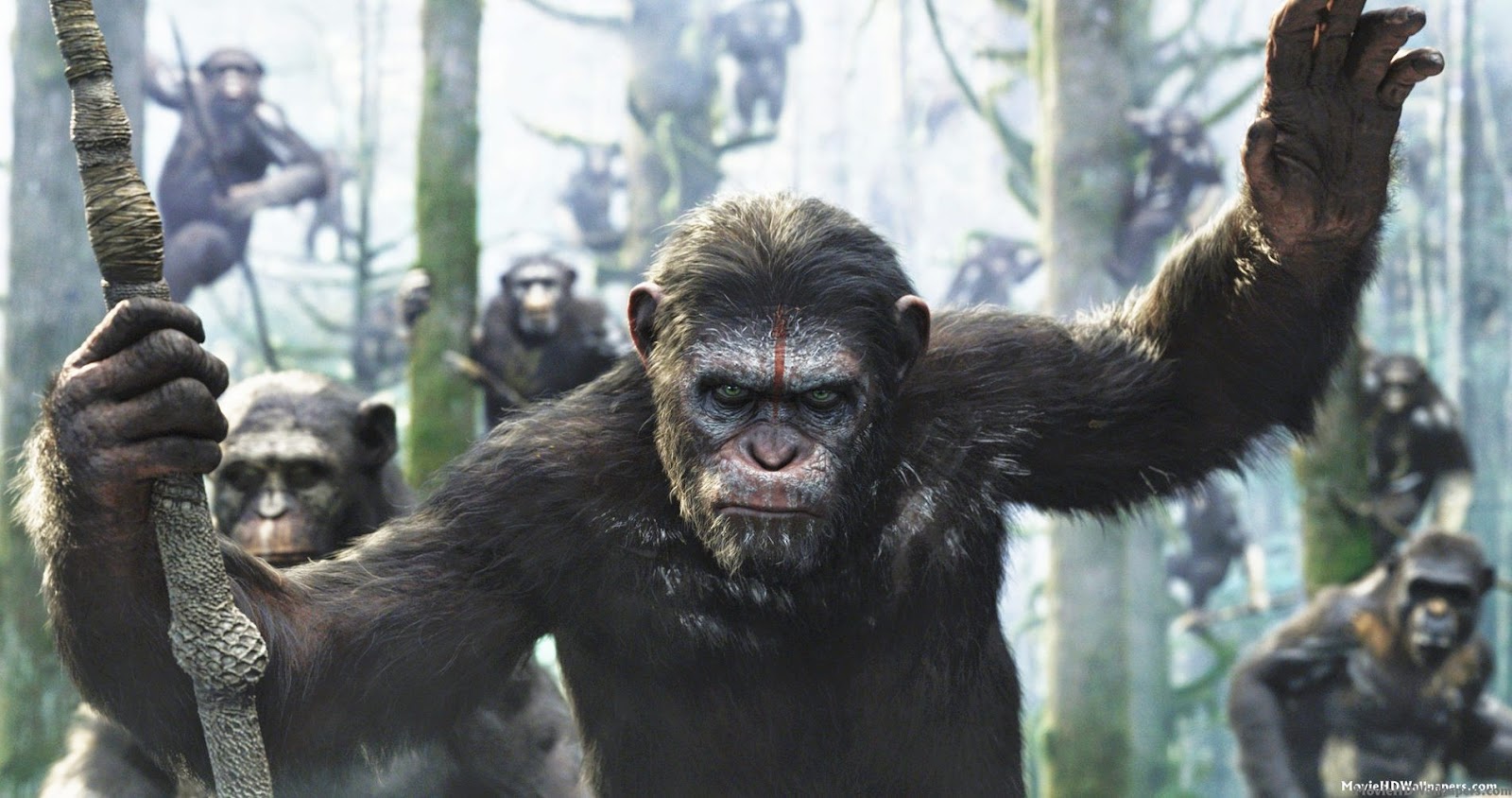 Between both actors dominate and it's pleasing that there is a focus on the history of loyalty and trust between them and how it is slowly eroding. It is noteworthy that the other principal apes, though receiving far less screen time, all come across strongly as recognisable individuals from the more reserved Maurice to Caesar’s conflicted son Blue Eyes; Nick Thurston is particularly good as the film progresses. Inevitably the human characters are less well defined though they do manage to make their presence felt. Jason Clarke is excellent as the sympathetic Malcolm who ends up helping Caesar in his hour of greatest need. In the city Gary Oldman gives good value as Dreyfus a leader who struggles to balance the demands of the human survivors and doesn’t seem entirely sure whether or not to trust the apes.
The film cuts between apes and humans, showing the problems of leadership and how small issues can escalate into dangerous crises. For Caesar the dilemma is how to evolve from being the leader of a rebellion to the incumbent in charge, a scenario that is surprisingly well conveyed despite the apes’ basic dialogue. Moments where he asserts his authority forcefully have a high impact. The narrative also draws similarities between both species; how there are conflicting views as to what to do within each and how their respective leaders deal with it.  If there’s a criticism the script occasionally seems a bit too neat; particularly towards the end, though there is a lot to pack into 130 minutes and the manner in which matters start to speed towards a series of tense sequences in the last half hour is breath taking cinema by any measure. The human characters could do with a little more fleshing out but the actors make the most of what they have. 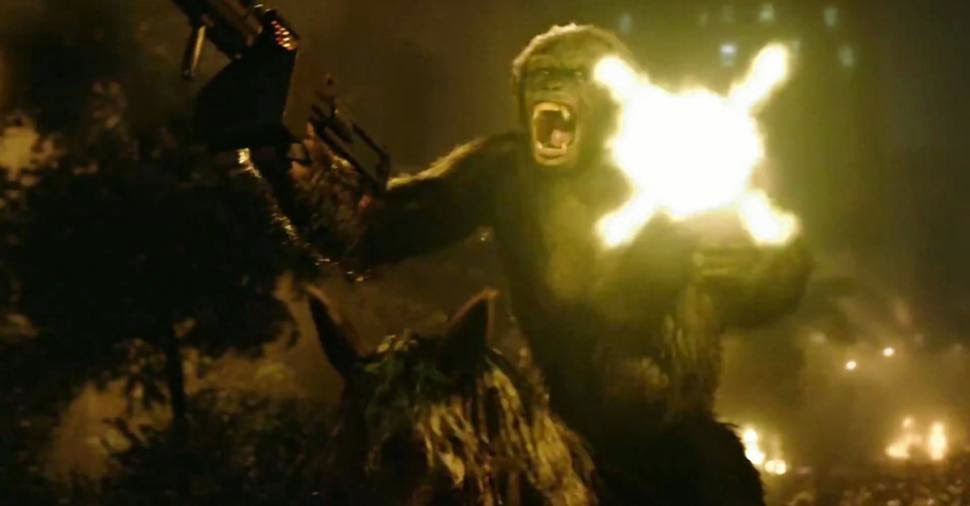 Director Matt Reeves and cinematographer Michael Seresin paint a vivid picture that frames every development in a rich sense of place always making the most of the apes’ threatening demeanour. The apes’ mountainside rain sodden dwelling made of uneven branches is matched by the ruined cityscape where the humans live. The 3D element is one of the more successful of recent years managing to involve us without detracting attention from what’s going on. Despite the main performances the film is also likely to be remembered for the stunning action sequences which Reeves strives to shoot in unexpected ways and which are choreographed brilliantly.
The best of these is when the apes attack the city – one remarkable shot is taken from the perspective of a spinning tank and we see the whole battle in a 360 degree turn. The charge is shot with the focus on the guns spitting bullets emphasising the gritty rage driving the attack. In fact the film opens with a sequence in which the apes, faces painted, are hunting deer though the forest; an early indicator of their power. Later a charged paw to paw combat between Caesar and Koba is shot atop a precarious tower which starts to collapse half way down. It’s a savage battle from which either could fatally topple and is the most thrilling climax to a film you could wish for.
Not that the film forgets quieter, tender moments involving Caesar’s family and some of the interaction with the humans  while there are also some surreal points particularly when power is restored and music starts to blast out across the woods. Caesar’s expression is a picture!
Dawn of the Planet of the Apes is a superbly calibrated, muscular, visually superb film and establishes a franchise that is flexible enough to have delivered two quite different but excellent movies. From this vantage point it is one of the best films of 2014.