Madness - Take It Or Leave It

The origins of one of the 1980s best British groups- as played by Madness themselves.

You suspect that the formation and initial career of well- known groups is never as melodramatic as even the most down to earth biopic or documentary will suggest but in 1981 Madness took part in a film of their origins which somehow manages to understate matters. By the time Take It or Leave It was filmed they already had several memorable hit singles and were on their way to becoming one of the early 1980s’ most successful British pop groups but none of this features in the film. Instead they attempt to re-create the band’s formation and early days four or five years earlier using actual locations and themselves rather than anything like sets or actors. The results are best described as authentic. 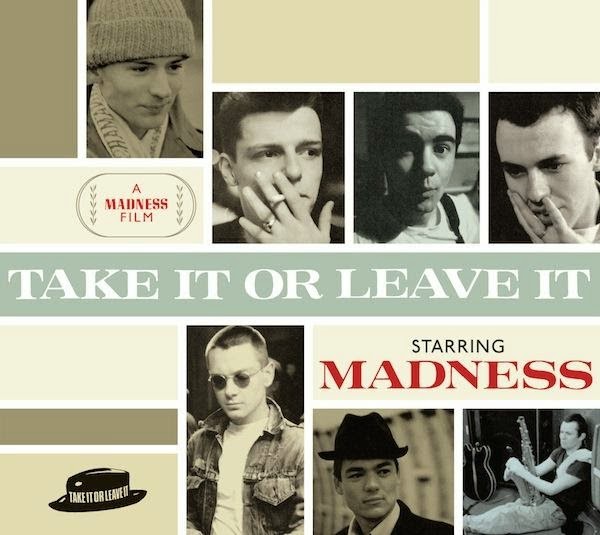 Made on a budget of less than £400,000 and filmed in just seven days, the first two of which ended up on damaged film it is fair to say there is more than a hint of amateurism. Scenes covering the earliest days seem to be coated in a greenish grime whereas the closer they get to the then contemporary 1981 the clearer and more colourful the picture becomes. Though this is by accident it does lend an interesting atmosphere to matters suggesting the group’s increasing proximity to the big time.
The story covers archetypal early days for a young band with all the introductions, rehearsals, cover versions and arguments you might expect. Shot without a full script director Dave Robinson instead encouraged the members to improvise, to say what they imagined they had said in these situations. As a result the dialogue is often trivial or jokey but what this does do is put over the differing personalities of each member. They are no actors but they are certainly characters.
Keyboard player Mike Barson soon emerges as the prime mover. With a somewhat moany demeanour punctuated by flashes of cheek he cajoles and criticises the others often to their faces. Each time someone is late or playing poorly the threat of the sack- albeit spoken jokily- never seems too far away. The rows are over something and nothing but what they do is gradually whittle away the non- committed and less musical to end up with the familiar seven that would go on to storm the charts. The fact that their most successful period would constitute pop songs is not obvious from the early ska influence of much of the material here. With a boisterous laddish sort of sound (and audience) the formative Madness seem a distance from the eccentric British pop kids of yore.

The film retains its lo fi values throughout even when the colour becomes brighter and the venues slightly bigger (bigger pubs that is) and the sense of excitement is palpable. Some of the scenes’ spontaneous seeming fun are contagious, especially the energy of the small gigs and when they are noisily messing about on the London Underground with light sabre style lamps they find lying around. Some of the rehearsals are funny and often end with somebody in a strop. What it lacking is a reference to the group writing their own material; the move from covers to original material is not really acknowledged in the dialogue.  The sense of a grimier, dingier London of the period – a lot of which has now been swept away- is particularly well conveyed making this something of a historical document of the place as well. Robinson’s camera wanders without any attempt to filter out the urban decay that prevailed in the late 1970s.
The end result is uncannily like the sort of You Tube clip you might see anyone make today, something that captures moments at a particular time and place without being particularly concerned with posterity. The film ends as 1981 Madness are about to go on stage everything now running to plan and the group are no longer playing earlier versions of themselves. In truth little has changed and they remain a reflection of where they came from.