This unusual film is based on a true story about the formative days of what became known as the Beats, radical young poets who influenced literary culture for decades. It’s unusual in the sense that director John Krokidas employs a style that is able to visually interpret the often feverish, drug assisted thought patterns of an unconventional group of Columbia University students in 1944. And what a group they are! They include such notables as Allen Ginsberg, Jack Kerouac and William Burroughs. Yet the fulcrum of the plot is actually the lesser known Lucien Carr, a manipulative, teasing but indefinably charismatic sort of personality, the kind we’ve probably all met art some time in our lives. It is his tune to which the others- consciously or not- dance yet it is exactly this behaviour which has got him into a tricky situation that will have ramifications for them all. 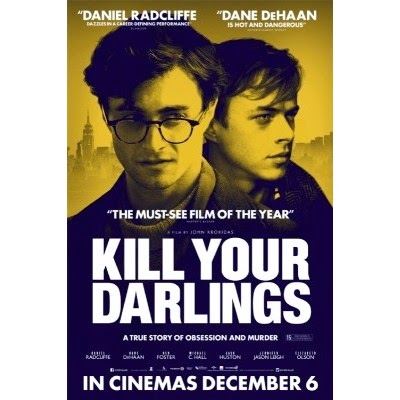 Of course what seemed radical in the 1940s is not necessarily going to shock us now. This was a time when conformity dominated and those who chose what we would now call an alternative lifestyle were seen as strange, blasphemous or worse. So it’s to the film’s credit that what we see- much of which now seem like fairly standard student japes- is presented very well within the context of the times. Stray radio broadcast commentary underpins the constant war situation going on in the background. The film doesn’t judge either scenario but is impossible from a modern viewpoint not to contrast the two.
The formative poetry we hear is hard work for those viewers (probably most of us let’s be honest) who struggle matching even the best poetry with even average prose. Yet you could view this period as the real genesis of what later became rock and roll; there is certainly something of that spirit here and wisely the film doesn’t linger too long on verses. The ideas that the Beats produced as their careers developed later are suggested well enough in blurry sequences where texts are cut up and pasted on a notice board in a party atmosphere.
The film leans heavily on the performances to convince us and in that respect scores highly. Daniel Radcliffe has had to work hard to convince us that he can out run the shadow of a certain wizard and it’s probably no coincidence that we first see his Allen Ginsberg brushing the kitchen floor with a familiar looking broom.  At a university a long way removed from Hogwarts though Radcliffe soars higher than he ever did on a Nimbus in what is his best screen role to date. Avoiding histrionics he pitches the naive intensity of Ginsberg and when he loosens up you can feel the character’s liberation from his unsettled home life. His growing infatuation with Lucien Carr is utterly believable partly because Dane De Haan is so magnetic in the latter role. The two actors are ably supported by others including an eerie pitch perfect William Burroughs played with uncanny stillness by Ben Foster and a free thinking Jack Kerouac played by Jack Huston.


We shouldn’t like Carr because while he is clearly being stalked by the older David Kammerer who has followed him from one university to the next, we see in his interaction with others how he seems to deliberately court attention. His motivations though appear to be simply practical in terms of getting others to do his essays, help play pranks and spread his free thinking idealism. In that sense his behaviour is no less unusual than that of scores of students to this day. Both Kammerer and to a large extent Ginsberg are in love with him but he is not interested in that. Events inevitably spiral out of control with Carr ending up imprisoned for Kammerer’s murder only to be subsequently released courtesy of a law that appears to offer legal support to certain types of murder. The circumstances are never quite clear as we only have Carr’s account of it but it seems that he was released and went on to lead a fairly conventional low key life. However his influence on the subsequent work of those involved cannot be underestimated.
Kill Your Darlings is a strange but very well played and made film that perfectly encapsulates the rebellious creativity that can occur in both good and bad ways. Whether or not you like poetry there is much here for anyone who feels or has ever felt that the rules did not apply to them.