A View from the Bridge


Arthur Miller’s classic American play is back in Britain

In 1950s Brooklyn, longshoreman Eddie Carbone lives with wife Beatrice and her sister’s orphaned daughter Catherine to whom he has become a surrogate father that she looks up to. However the arrival of two illegal Italian immigrants to live in the house creates a tension when one of them starts romancing Catherine awakening feelings in Eddie that he won’t even admit to himself. He grows to resent the relationship but cannot really express that frustration properly. This version of the play, currently touring the UK has a cast who acquit themselves well yet there is a sense that the work itself no longer carries the same resonance especially here.

The world has changed a lot since Miller wrote this play and this production renders its period faithfully enough it’s just that it is a time that somehow seems distant and unidentifiable. The narrative hinges on reputation and appearances; Eddie is unable to express himself so hides in macho bluster decrying Rodolfo because he is adept at several things including singing, cooking and even dress making! It’s a culture clash that brings a more enlightened artistic European sensibility into conflict with the red collar Americanism and this ordinary man cannot cope with it. To the modern audience Eddie is like a dinosaur; even in the 1950s his way of thinking was at odds with a changing world. It gives a sense that the play that would not be possible to adapt to another time or place unlike some great works.
Other aspects are more difficult to accept even if they may be period accurate. The plethora of illegal immigrants and the loyalty towards them by the men whose jobs they are potentially taking by invitation mirrors today’s arguments but the play simply accepts rather than challenges it. It also seems melodramatic that an entire neighbourhood would turn their backs on Eddie- who we have seen is well liked- on the basis of an unproven accusation even though we know it is true. The play also never reveals whether or not Rodolfo is really in love with Catherine or it is just a ploy to get a green card and that’s a weakness because it is the central pillar of Eddie’s accusations.
Eddie’s overbearing attitude towards both Catherine and wife Beatrice makes him difficult to like. Near the end his true feelings towards Catherine are mentioned but it is more difficult to understand why if his wife has recognised it for a long time she has said nothing. Miller originally wrote this as a one act play and it is noticeable how it loses some of its subtlety as it progresses. Stage fights are tricky to pull off, especially in smaller theatres and the climax of this production lacks a sense of reality despite some incidental music and use of lighting. 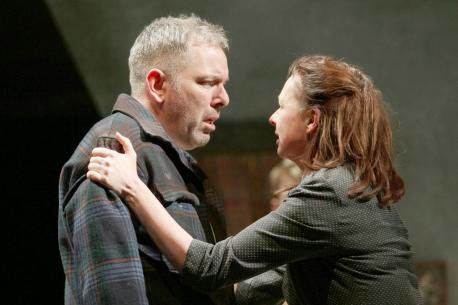 In the central role of Eddie, Lloyd Hutchinson is excellent, his body language that of a man permanently worn down by inner demons he is unable to articulate. He brings a warmth to the early scenes and a palpable tension to later ones as he lashes out.  Shannon Tarbet’s Catherine is a strong mixture of vulnerability and newly won independence while Andy Apollo makes Rodolfo light footed and amusing sweeping the guileless Catherine off her feet with his singing. The most difficult role is that of Beatrice which Julia Ford carries off so well. On the page she might seem like a whiny character but on stage she makes us feel for her wish to allow Catherine her freedom while at the same time remaining loyal to her husband.
If time has been hard on this venerable play then this is a production that makes the best of it with a fine cast and enough in the strong performances to iron out most of the rough spots.

This production is at the Liverpool Playhouse until 11 April then continues touring.