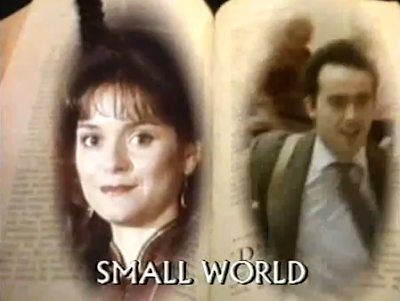 So far, most of the shows on this list have been ones that should be remembered as much for their prominence as their erstwhile popularity. Madcap romantic drama Small World, however, was a genuine smash and one of the most talked about shows of its time.
Barry (later Finbar) Lynch starred as Persse McGarrigle, a postgraduate student who embarks on a globetrotting romantic pursuit of his elusive contemporary Angela, set against a background of eccentric academics and farcical conferences, not to mention identical twins starring in 'adult' films. Adapted by Howard Schuman, previously a writer for ITV's seventies hit Rock Follies, from the 1984 novel by David Lodge (who had input throughout the production and was very pleased with how it turned out), Small World boasted extensive location filming and a heavyweight cast that included Sheila Gish, Stephen Moore, Rachael Kempson, Charles Gray, Frederick Jaeger, Peter Cellier and most impressively John Ratzenberger, better known as Cliff Clavin in Cheers, who surely can't have come cheap.
Though it was ostensibly a drama, Granada astutely lobbied for Small World to go out in the Sunday night slot more normally associated with unconventional comedy shows like Hot Metal and Spitting Image; indeed, it ended up being aired alongside episodes of peculiar American Spitting Image rip-off DC Follies. This was a move that paid off immeasurably, and word of mouth recommendations resulted in dramatically climbing viewing figures by the end of the run. Similarly significantly, it was partly commissioned in response to the popularity of the BBC's offbeat campus drama A Very Peculiar Practice, the premise alone being enough to interest admirers of that show. 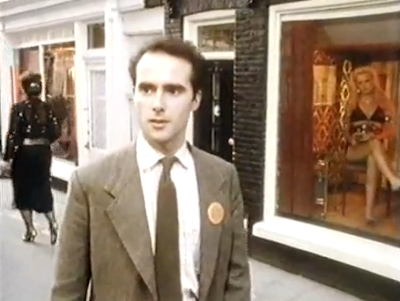 The success of Small World prefigured that of later similar dramas like This Life and particularly Cold Feet, and in retrospect it is surprising that it took the various television companies so long to attempt something else along the same lines. Oddly, given the somewhat highbrow nature of the storyline and indeed much of the dialogue (not to mention numerous literary in-jokes), the broadsheet critics poured scorn on what they saw as an inconsequentially light and fluffy effort, while the tabloids couldn't get enough of the show and in particular its young leads.
Surprisingly, there never was a sequel to Small World - reportedly due to Granada wanting to concentrate on regionally-themed programming in anticipation of the impending ITV franchise reshuffle - and as a consequence Persse's ludicrous love life went from being a huge talking point to barely ever being talked about at all.
Next Time: What happened when Windy Miller met a dragon...
Posted by John Connors at 19:40