By Tim Worthington
It all seems so innocent now. Back in 2001, ITV's Popstars saw an ad-hoc pop group assembled from clearly quite talented youngsters by a panel of judges that actually knew something about the behind-the-scenes side of the industry. What's more, it was all pre-recorded and presented in a documentary format, without a single phone-in vote to rig.
The non-voting public certainly took to Popstars,as it slowly climbed the ratings to challenge the all-conquering soaps by the end of its run. Kym, Myleene, Suzanne, Danny and Noel (come on, you were struggling, weren't you?), collectively known as Hear'say (nobody was ever quite sure what the apostrophe was all about), went on to become huge chart stars for a brief but intense eighteen months with a string of likeable pop songs. Sensing the public were starting to lose interest, they split in 2002 after two albums, going on to surprisingly successful careers in stage musicals, soap operas and, erm, classical music. No, really. 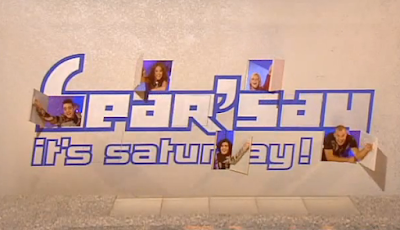 By the time that Hear'say had called it a day, ITV had moved on to the more viewer-interaction heavy (and yet less contestant-talent heavy) Pop Idol, and those Saturday evening schedules that we know and love and cannot escape were starting to take their all-too-familiar shape. But what kept those inflated viewing figures inflated in those all-important months between the end of Popstars and the launch of Pop Idol? None other than Hear'say It's Saturday!, a variety showcase for the network's newest stars, that took over Saturday evenings on ITV between August and October 2001.
You'll probably be surprised to hear that 'variety' was actually the key word here, with the big-trainered fivesome each adopting a defined 'character' and getting the chance to hone their acting and presenting skills in between the singing bits, with comedy sketches, rowdy audience participation, and - most infamously - delivering corny one-liners to each other ("fancy a quickie at lunchtime?" - "Danny, I think it's pronounced 'quiche'!") via a Rowan & Martin's Laugh-In-style 'Comedy Wall'. They even showed a bit of variety in the musical numbers, splitting off into different smaller groupings and indulging in some unusual choices of cover version. For this kind of group, that's practically Tales From Topographic Oceans. 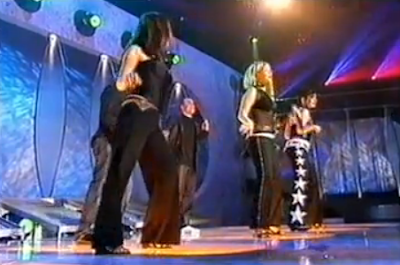 Though Hear'say released an alarming amount of videos (and how archaic that word seems already) during their short stopover at the top of the charts, they never quite got round to doing a The Best Of Hear'say It's Saturday! compilation, and indeed the sheer brevity of their career pretty much precluded any talk of a second series. Hear'say were never the kind of group that were going to be remembered for their musical legacy, and even their pioneering (of a sort) reality show origins have been eclipsed by the more prominent - if less commercially successful - contestants from shows that ended up in the slot vacated by their one headlining moment.
Next Time: Post-punk ridiculing of teenage angst...
Posted by John Connors at 19:17