Doctor Who Instants - Day of the Moon

Does it all add up for Amy? 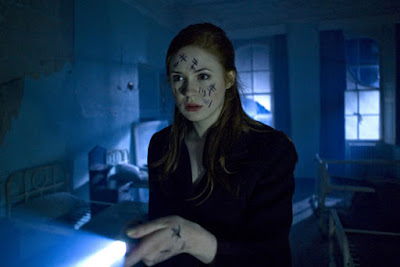 It says something about the relatively sophisticated narrative this season is using that Doctor Who is now included in the BBC’s new drama trail, alongside what some people- hello, Trevor Eve- would undoubtedly consider far more worthy material. What do these naysayers know? In two episodes, this series has morphed into something more multi faceted and, yes, clever. Of course, the signs were there last year but Steven Moffett must have drunk some terribly strong cranberry juice while working on these scripts.

Not taking up exactly where last week left off- and doesn’t that get us pondering- the opening sequence makes good use of the American excursion, Toby Haynes shooting to make maximum use of the Utah vistas and, casually as you like, each of our other main characters appears to be killed. They killed Rory- again!! Only none of them are really killed, in a development that keeps you guessing right until the last moment, this section is suddenly resolved and we learn three months have passed.

From herein, the tone darkens further- last week’s playfulness is largely abandoned in favour of some convincing horror. The size of the old orphanage and the creepy presence of the Silents is enough to once again question the wisdom of the time slot. The most unsettling bit is hearing Amy’s panicky thoughts wherever she is and seeing the others’ reaction to them.
﻿﻿﻿﻿

The way all this is tied into the Moon landings- we’re in July 1969 by now- is a little hazier on first viewing. It took me ages to realise the significance of the astronaut’s suit but Moffett is already growing new restless roots meaning that by episode’s end there are lots of dangly loose ends. I suspect we’ve not seen the end of the Silents either and as for Amy’s pregnancy weirdness, it brought out some good work from all concerned. Tease that he is, Moffett didn’t really tell us who River Song is and it may be there is no mystery part from where she is from. Besides, with a wry quip about David Frost and a regenerating girl- oh yes, she’s some sort of Time Tot- as a coda, there’s just too much going on!
Looking for clues, the obvious- and therefore probably incorrect- assumption is that this is all Time Lord business. The Silent’s TARDIS like ships, the girl they capture who seems able to regenerate, and the Doctor’s apparent death at the start of last week’s episode. Just as easily this may be entirely the wrong track. The best thing to do is to stop speculating and enjoy it. This story seems drawn from a deeper well than almost all Doctor Who before it. It’s a risk given the notoriously restive attention span of today’s audiences and the fact that you really are going to need to watch every week to keep up. However sometimes a show like Doctor Who- a show which is after all about time and space travel – should cut free from its moorings and do what it likes. So long as there are still monsters – and the Silents are amongst the best- and it looks great why not take a chance?

Given this more mature material, the whole cast again up their game but it’s worth mentioning how Karen Gillen really makes you feel for her character this week in a way she has never done before. Suddenly Amy Pond is real, ironically just as we’re wondering whether she is! Besides the script’s more adult approach, there’s an authenticity in the period look of things as well; you never once feel you are not in 1969.
Thrills, scares and lots of unanswered questions- what more could we want. Brilliant, at least.

Email ThisBlogThis!Share to TwitterShare to FacebookShare to Pinterest
Labels: Day of the Moon, Doctor Who, Doctor Who Instants