There’s a scene a little way into Joe Cornish’s first film where you do actually want to move to the literal edge of your seat. Hoodie wearing kids are fleeing ferocious aliens by whatever means necessary in the neon lit walkways, steps and tunnels of an urban council estate and the way it is shot and edited makes it the most exciting thing that’s been in the cinema in a long while. Proof that you don’t need superheroes with portentous back stories and silly costumes or budget busting special effects to thrill the audience. 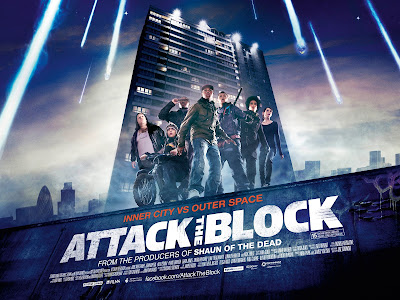 Attack the Block is a really pleasant, vibrant surprise. The expectation was surely that Joe from Adam and Joe’s debut movie would be a sort of low rent Shaun of the Dead, OK in an in- jokey sort of way. One to catch up with on DVD perhaps. Instead, the whip smart 88 minutes is ram packed with action, wild peril, wit and drive. In short, you really do need to make the effort to see it at the cinema.
The plot is simple enough- just as qualified nurse Sam (Jodie Whitaker) is in the process of being mugged on a noisy bonfire night, something crash lands nearby and the masked hoodies go after it. When Sam brings the police back onto the estate to try and identify them, well things get really nasty. Cornish’ ambition means that rather than allowing the locale to confine the action, he uses to it play big movie tricks allowing the film to break free of the usual British reserve. So the chases, so often lame looking in UK made films, are gripping, while the aliens are feral, relentless and scary.

There is some borrowing from the likes of John Carpenter and the Alien films but it is never self conscious. Cornish shoots the block to emphasise its vastness, a couple of times the camera seems to peer up a mountain. As the film becomes a survival of the fittest, the block seems more menacing. There is a superb soundtrack too plus a memorable recurring theme that you’ll find rattling around your head days after you’ve seen the film.

There was always a possibility that the juvenile characters might be either too drama school fake or just un –likeable. In fact they are treated for the most part unjudgementally, being neither wholly bad yet never becoming too good to be true. Cornish’s script has a lean but effective way of sketching enough within the pacy action to enable us to become used to their company. Leader Moses (John Boyega) is deadpan and stoic throughout yet with the minimum of words he becomes a realistic type of hero.
Each of the characters is unpeeled as things develop, never too obviously and often through banter. They are believable as a tight gang and once you get used to the curious mix of urban patois, Americanisms and phrases like “I ain’t even lying” you’re rooting for them. Mostly first time actors, they are perfect in these roles, especially Alex Esmail’s wise cracking Pest. Jodie Whitaker handles a tricky role so well too, her banter with Esmail and gradual standing up to Boyega highlights. There’s also amusing turns from Luke Treadaway as a stoned posh boy out of his depth in every way and the ubiquitous Nick Frost as a drug dealer.
As for the aliens, memorably described by the kids as “big alien gorilla wolf mother*******” they are tremendous and the best thing not to reveal too much about before you see the film. Suffice it to say you are never in doubt as to their ferocity with a few Final Destination type moments making it unlikely all the characters will reach the end of the film. This gives them real menace and unpredictability.
Stand out scenes? Oh plenty, but you need to see them yourself. What pleases the most though is how Cornish always takes the less predictable route and how he can pepper laughs amongst the carnage.  The only weak spot is perhaps the ending being telegraphed rather early and there is occasionally an air of contrivance regarding the availability of handy weapons- you do wonder it the aliens had dropped in on any other day than November 5th how much more difficult things might have been for the kids.
Overall this film is vivid and alive in a way that this year’s big screen offerings have so far failed to be.