Steve Wright: "Good evening it's another Top of the Pops. Yes it is. We've got a great show for you tonight, and we're going to kick off with this lot over here. It's Gidea Park and Seasons of Gold." 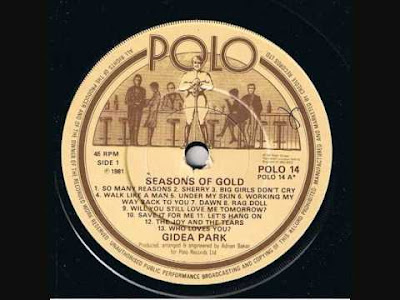 Gidea Park: Seasons of Gold [35]. Who knew that Gidea Park (the biggest bunch of blow-dried nitwits you've ever seen, and this is 1981 you can't throw a stone without hitting a bunch of blow-dried idiots) would make me nostalgic for The Dooleys. Come back Jim, John, Frank, Kathy, Anne, Helen, Alan, and Bob. All is forgiven. This time Gidea Park are "performing" a terrible Four Seasons medley. Yet another one. In a year that has seen  medleys clog the charts. Why were people buying them? Did they just enjoy the tremendous sense of value they offered? Why buy ten records when you could buy one that Frankensteinised ten together? I've decided that one of my reasons for hating Gidea Park is because they feel the need to introduce each record. Beach Boys Gold started, "we'll remember always the golden Beach Boys sound." Now Seasons of Gold starts, "the memories there to unfold, so many reasons to recapture that musical gold, remember the Four Seasons." Did Gidea Park really think their audience was so stupid they needed to be reminded which group's songs they were about to hear, and of the concept of medleys?  Although to be fair, these people would have just brought a Gidea Park record so they are idiots.

OMD: Souvenir [3]. A repeat from the 03/09/1981 edition. We get another chance to see Jill (Miss Torquay and Miss Radio 1 Roadshow 1981) spurn Peter Powell for a mystery fella in the audience slow dancing bit.


Beggar & Co: Mule (Chant No.2) [41].After watching Imagination, Beggar & Co have decided to sex things up. They're all wearing see through vests and leather trousers. All? Well, not all. The guitarist at the back is wearing the wrong sort of vest and trousers. And the drummer and keyboard player decided to save money. Instead of going to trendy PX in Covent Garden they've grabbed a couple of granddad’s sting vests off the washing line. Guys, the whole point of having a unified sexy look is that everyone wears the same thing.


Sheena Easton: Just Another Broken Heart [42]. A whole verse of this song is devoted to the convoluted extended metaphor of Sheena Easton as a discarded library book. "A library book you won't renew/A card arrived/You're overdue/You get replaced by someone new/I feel foiled and shopsoiled."


Hi-Gloss: You’ll Never Know [17] (Legs & Co). Legs & Co caper through seaweed fronds while dressed in nice sparkly blue dresses. It's one of those occasions where there's such an obvious mismatch between song, set, and routine that there must be a sensible explanation. Was everyone briefed to expect a more underwater themed song which subsequently underperformed in the charts? Had Designer John Coles borrowed some funny cigarettes from Julian Cope last week? As Hi-Gloss keep telling us, you'll never know.


The Tweets: Birdie Song (Birdie Dance) [25]. "This really must be the surprise hit of the year," says Steve Wright as the unmistakable opening chords of the Birdie Song oom-pah in the background. Steve Wright needs to work on his poker face. Check out his expression as he turns away from camera at the end of his introduction. The Tweets themselves are a terrifying dead-eyed collective of giant bird costumes; the yellow one has a male friend to hold his double-bass when he goes off to do the dance (increasingly wrong as the poor musician inside the costume gets more hot and tired). The Tweets are better than Gidea Park.


Number One:Adam & The Ants, Prince Charming. I've been getting increasingly confused since BBC4 cranked up the broadcast schedule of Top of the Pops. I was watching episodes months in advance of writing them up here, and then revisiting episodes and realising that songs I'd thought were done and dusted had only just got into the charts; as was the case with Prince Charming. In the end I stopped trying to keep pace with BBC4, I've no idea what they are showing now but I imagine they are going so fast that relativistic effects have kicked in. If I attempted to tune in now I'd only be able to see the back of my own head.


Closing Titles: Dollar, Hand Held In Black & White [24]. Astonishingly The Tweets are there in the crowd for the end of show dancing. You don't see Godley & Crème sticking around. Or Gidea Park. But that's because they are scared of having their heads kicked in.


Performance of the week: Gidea Park... only kidding it's The Tweets... Sorry, I'm getting silly and over excited. Beggar & Co: Mule (Chant No.2).