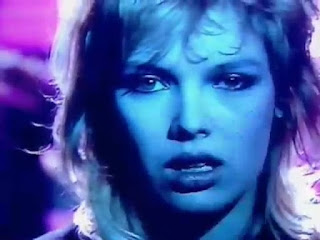 Lynx: Intuition [41]. Tommy Vance has been reduced to a voice-over linking songs. Say that gives me an idea for a radio show. This video cuts between Lynx performing on a vile pink and blue set, and sepia toned footage which suggests that the band somehow grew up in the 1930s. 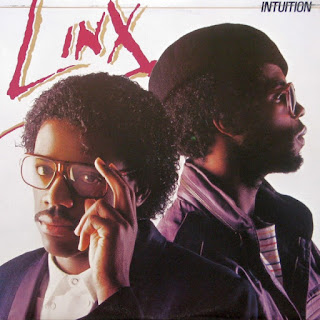 Kelly Marie: Hot Love [22] Tommy is back in vision. CSO'd in front of the Top of the Pops logo. He launches into a long, desperate, rambling link. "Okay, that was a good bit of film shot outside on a... well I suppose you could call it somebody's... um... well, football field maybe. A sort of backyard football field. Well let's come back into the Top of the Pops studio and see Kelly Marie." Presumably the Floor Manager is just out of shot making frantic come-on-spin-it-out-the-show-is-underrunning gestures. "She is over there [points] with some Hot Love." This is a blatant lie. Kelly Marie is not "over there" she is on 2-inch videotape edited in from the 26/02/1981 Top of the Pops. Kim Wilde appeared in studio on the same edition, I wonder why they didn't use that performance instead of the video?
Freeez: Southern Freeez [8]. This single has had a good run. This repeat is edited in from the 12/02/1981 programme.
Status Quo: Something 'Bout You Baby I Like [9] All Status Quo videos are the same; the band rocking out in a warehouse, pretending that they are on stage. Well, just to prove you wrong Status Quo have rung some changes. This video features a bewigged blonde lout wandering around while posters come to life and show footage of the band rocking out in a warehouse, pretending that they are on stage. The posters come to life via the magic of crude CSO. Massive yellow fringes are the order of the day; on the special effect posters and hair (boom! boom!). Record shop N & J Discs (251 Preston Road, fact fans) seems to have been absorbed into a redeveloped Preston Road Underground station which will disappoint fans of visiting the locations of old Status Quo videos.
Beggar & Co :(Somebody) Help Me Out [15]. Another repeat from the 12/02/1981 edition.
Landscape: Einstein A Go-Go [38]. The video starts off well with the band mucking around in a Frankenstein style lab. The second half with the band playing instruments is sub-Devo nonsense without the interesting hats.
Talking Heads: Once In A Lifetime [14]. Talking Heads become the second non-number one band to have their song played two weeks in a row on Top of the Pops. Michael Hurll must have been desperate for usable clips to recycle this bizarre Legs & Co routine from 19/02/1981. Tommy Vance lies again and describes this as "excellent." It's just bizarre. Lulu is voguing frantically while the others strike random poses. No more space dust for Flick Colby.
Kiki Dee: Star [17]. Repeated from 26/02/1981.
Coast To Coast: (Do) The Hucklebuck [5]. A third song from 12/02/1981.
Top Ten Countdown: This week there's a spinning number to indicate the chart position. Will the presentation be the same next week? That depends on the fickle whim of Michael Hurll. Number One: Roxy Music, Jealous Guy. The closing credits play out over the video of Brain Ferry making the sexy faces to camera.
Performance of the week: The Teardrop Explodes: Reward