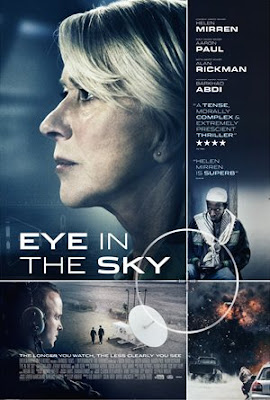 At first we witness standard military and political protocol; everyone is reasonably calm and efficient and sure of what they want. The mission that has been approved is to lift two suspects from the village and bring them home to the US to face trial. Yet it soon becomes clear that this will not be possible and British commander Colonel Katherine Powell (Helen Mirren) is clear the aim must change once spy cameras witness a suicide bomber being prepared. She pushes strongly for the house to be taken out by a missile that will be fired from a US drone watching proceedings.
It is here that the dramatic screw starts to turn. Though she has an ally in Lt General Frank Benson (Alan Rickman) who is in charge at the London end, his attempts to get approval for the change are constantly denied. Some civilian advisors have doubts, other politicians do not want to give the go ahead without “referring up”, a process that causes delays much to Powell’s frustration. Then when permission is granted Steve Watts (Aaron Paul), one of the drone’s remote `pilots` spots a little girl from the village selling bread right in front of the target.
Thus the arguments shift from the political to the moral. Powell in particular puts considerable pressure on her risk assessment officer to find a way to get the risk below an acceptable level. Meanwhile Watts and his co-pilot Carrie Gershon (Phoebe Fox) can only watch knowing they will be the ones actually firing. Meanwhile stuck in the middle of it all undercover Kenyan agent Jama Farah (Barkhad Abdi) gives us a different angle on the dangers.
It twists and turns into a fascinating yet increasingly worrying dilemma and there is a point in the film where you realise you want Powell to win the argument and the potential terrorists to be taken out despite the child’s presence. The story has been accused of being manipulative- had the bread seller been an adult would it have been such an issue? Also there is the one flaw in the plot in that all concerned overlook the possibility of anyone else wandering into the target area.
Even so it is such an absorbing drama that it keeps you hooked right up to the end. Visually there are few tricks even with the drone-eye-view shots but the number of multiple screens on which those making the decisions giving them what appears to be a Gods’ view of below. Gavin Hood's direction takes us right into the heart of things without being showy. The cast convince in their roles though perhaps Helen Mirren’s Powell is a touch over emotional for someone in such a senior position. There is even light humour to be wrung from such a dark subject as the vacillations of politicians frustrate the soldiers; Alan Rickman in what turned out to be his final film is a past master at reacting with just enough facial expression to let you know the character is annoyed. It would be too big a spoiler to say how the film ends but it is really well worth seeing if only to find out what conclusion you reach by those final credits.