The Beeb’s boldest channel heads into the hinterland….
Out of all of the BBC’s channels, BBC3 has struggled most to find its identity. Largely filled with repeats it has a low average for producing memorable programmes of its own yet when it does they are generally interesting. Now it is moving online complete with its hilarious new logo which is surely taken from the comedy WIA. Indeed it is easy to imagine the design committee sat on rocking horse styled red seats or something thinking it up. Yet even that move has hardly been smoothly done. Despite the enthusiastic efforts to present it as a reaction to the way young people watch television (not that young people watch much television anyway) when it is really a move born out of government cuts is perhaps understandable. Announcing that any new programmes will also be shown on either BBC2 or BBC4 seems to make the move pointless. Not to mention the awkward idea of presenting a `channel` in the format of a `platform`. It is another example of the BBC racing to dismantle itself before the government does, as if that is any better. The whole operation feels like a decision taken by about 30 different people each of whom see `online` as something different. While sitting on orange beanbags probably.


Launched in February 2003, BBC3 is unlikely to go down in broadcasting history as being iconoclastic yet it has produced some hits and some absolute award winning gems. More than that it was intended as an experimental channel willing to take chances so its no wonder it missed more than it hit. The important thing is that it was there. It was designed, according to statements at the time, to appeal to 16 to 34 year olds which sounds like a rather wide spectrum of people to begin with. There is a world of difference between the life of a 16 year old and that of a 34 year old and it is very unlikely they will share similar entertainment interests. Anyway launched it was as a completely automated station. With only minute long news bulletins read in the casual style first tried on children’s programming, the channel started broadcasting at 7pm each evening. There were a lot of repeats and the seemingly never ending supply of Family Guy episodes filled many an hour. The channel did produce some excellent documentaries on serious issues of particular relevance to the target audience.  However it’s central focus seemed to be on drama and comedy and while there were plenty of misses there were also some palpable hits…
BBC3’s Greatest Hits
Little Britain
Sketch show comedy taken to its natural limit, Little Britain became the channel’s most successful show and made stars if it’s performers. It also set the trend of being so successful that BBC2 poached it, a habit that did nothing to help BBC3’s maintain its own identity. The trouble with Little Britain is that it does not bear up to repeated viewings. There is not a lot of content in the sketches, merely varied scenarios which allow characters to deliver their catchphrases. It lacks The Fast Show’s wider scope of characters and somehow fails to tap into the Monty Pythonesque anarchy which it is aiming at. That said several characters endured, the show was popular and several tours were launched on the back of it plus it bequeathed us David Walliams whose Stephen Fry-like ubiquity seems to show no bounds. Plus it was narrated by Tom Baker and that can’t be bad.
Two Pints of Lager and a Packet of Crisps
How odd that a largely studio bound sitcom with an audience became the channel’s flagship show in its early days. So much for innovation and youth programming; Two Pints is straight out of the Seventies.  It’s one of those sitcoms that is not as funny as it thinks it is but neither is it as bad as its detractors make out. At least not at first. The fact that it outstayed its welcome and ran for 2,984 seasons or something didn’t help yet it did have a knowing sense of its own shortcomings. When one of the lead characters left he was killed off screen by a shark! The series also had Sheridan Smith who makes any part she plays believable.
Gavin and Stacy

The comedy drama that launched James Corden on the wider world deserves to be known for more than that. In fact Corden was already an established actor (he was one of the original History Boys) and a writer who devised obnoxious characters for himself to play while creating much more subtle ones for everyone else. Gavin and Stacy is barbed but well meaning, looking at relationships and families with a freshness that other comedies of the time could not match. There are some excellent performances and Rob Brydon steals every scene he’s in. If Corden by his own admission got carried away afterwards that should not detract from what is a superbly written and performed series that did not outstay its welcome.
Doctor Who Confidential
The companion behind the scenes show for BBC1’s successful re-invention of the television legend, Confidential was born in a period when people couldn’t get enough of the Time Lord. Essentially an extended behind the scenes it eventually became repetitive and relied on guest stars saying how wonderful it was to be on the show, while Danny Hargreaves blew something up or explained for the 900th time what green screens were for. When we were being taken on a tour of the food bus where everyone ate it was perhaps time to finish. 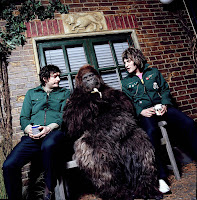 The Mighty Boosh
Having established themselves as the hot new comedy act in the late Nineties, it took a while for the Mighty Boosh to emerge onto television but when they did it was in the most surreal show. Across 3 seasons totalling 20 episodes Julian Barratt and Noel Fielding delivered their own style of comedy which was quite unlike anything else.


Being Human
Toby Whithouse’s comedy drama about a vampire, werewolf and ghost sharing a flat sounds like it’s a sitcom but in fact turned out to be a drama that soon extended beyond the confined walls.  Starring another History Boys alumnus Russell Tovey, the show soon developed a mythology and includes some excellent performances and as much supernatural brutality as you can reasonably get away with these days. Oh and jokes too.
Coming of Age 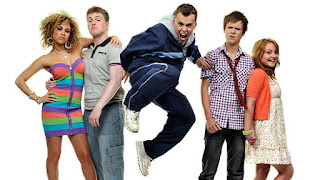 The default stance for BBC3 comedies was rude but Tim Dawson’s outrageously anarchic three season series went further than most yet did so with an endearing quality that made you laugh along. It also probably hit the spot with the channel’s target audience more than most. Nothing much was off limits, a lot of it delivered with extraordinary energy by Joe Tracini, the show’s stand out performer.
Torchwood
Doctor Who spin off set in Cardiff where a rift causes all sorts of alien types to converge. The series got off to an unsteady start, advertised as being a more adult show but displaying some irritating teenage style views of adulthood overdoing the swearing and sex and not in an interesting way.  It was in your face and very, very Welsh even if the lead character was the perpetually grinning American John Barrowman. Oddly the series seemed designed to appeal to people who did not like Doctor Who so while that series’ fans found it gauche and unwelcoming, non Whofans were more responsive. An early win was killing off someone we assumed was going to be a regular and eventually it did settle down and managed to develop several interesting characters even if it remained conceptually hamstrung by the limitations of the Cardiff setting. Visually the show made the most of night time and shot Cardiff Bay as if it was San Francisco. As the storytelling grew bolder so the series rose above its adolescent beginnings though by the time it got seriously good BBC1 nicked it to show the excellent `Children of Earth` third series.
Russell Howard’s Good News
In which said chirpy comic tries to find more light hearted stories amidst the week’s news. As an antidote to the relentlessly smug Have I Got News For You over on BBC1 it is certainly a refreshing take though it depends how much of Russell Howard you can cope with.
The Fades 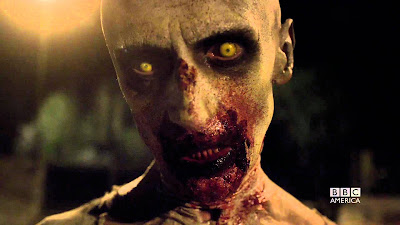 Brrr, it gives us the shivers just to remember this. Utterly dense and scary drama that won awards but never found a big audience. Directed with a dark, disturbing flourish and somewhat impenetrable there is much to recommend the hardy viewer. So far the only series we know with dead ravens falling out of the sky. 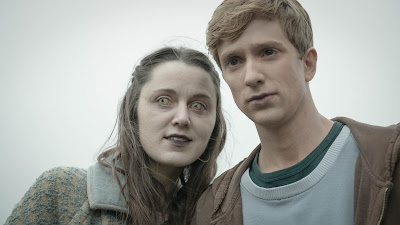 In The Flesh
BBC3’s best drama, this moregous tale of outsiders and small town attitudes put a new spin on the undead. Writer Dominic Mitchell brilliantly presents a scenario set in the aftermath of a zombie `rising` which the government have contained. Now the `undead` or those with Partially Deceased Syndrome have to be re-integrated into their communities churning up all kinds of resentment, hostility and fear. Over the course of just nine episodes, the drama manages to fit in an enormous amount of content riffing on all kinds of topics while managing to maintain the drama. Anchored by a superb performance from Luke Newberry heading a great cast and a spate of riveting plot twists, the series justifiably won awards, critical acclaim, good viewing figures and a loyal fan following. Naturally the BBC cancelled it.
Bad Education
Hit and miss slapstick with the premise of a terrible teacher trying to be cool while overseeing a chaotic class this comedy has proved surprisingly durable and even made it to the big screen.  Actually not as trashy as it looks, sometimes it has little moments that suggest great things but never really stays there for very long. One advantage is a surprisingly amusing performance from Gavin and Stacy’s Matthew Horne.
Cuckoo
The comedy about the eccentric American who ends up living with his girlfriend’s family reinvented itself after one series when original star Andy Samberg was unable to appear in the second. They roped in another US star but really the redoubtable Greg Davies became the actual star and why not. Includes some exquisitely awkward comedy none more so than Davies’ attempts to steal a book at the funeral of his former professor. The comedy chosen to lead the online advance. 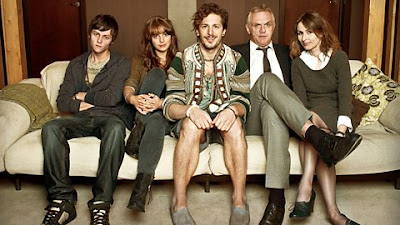