Why didn’t more people watch The Musketeers second series?
It’s a scenario akin to an end of the football season relegation struggle when something unexpected happens and the team stays up after all. Thus it was that mid- way through the on//off broadcast of the second series The Musketeers had a third confirmed even though the ratings this year ranged from disappointing to disastrous. Someone somewhere in a position of authority clearly likes the series otherwise it would almost certainly have been axed. In this case though, unlike other shows that suffer a ratings decline, the show is improving rather than getting worse. Indeed it could well be that years from now this little seen second season will be uncovered as a lost gem, something that slipped under the radar for a number of reasons. 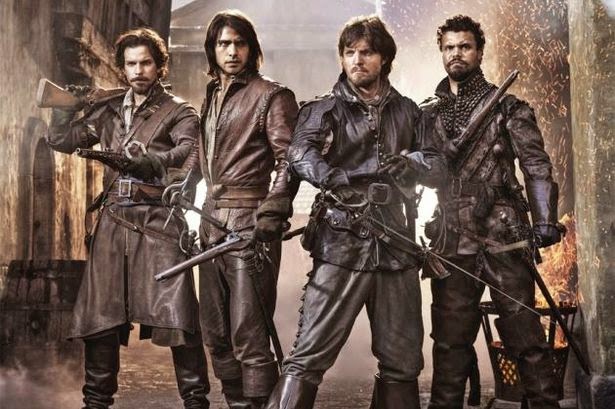 When the show debuted at the start of 2014 it was to an audience of 9.28 million, a figure it has never approached since. This in itself might seem alarming but recent television history has plenty of similar examples. In the end the series won over initial doubters and consolidated to a regular audience of around 5.5 million. Not stellar but in these multi- channel, multi delivery days it counts as good enough.
During the development of season two the producers seemed to acknowledge some of the criticisms made, especially that the show was an awkward fit for today’s niche television structure. It was, people said, a bit too dark in content for kids, not postmodern enough for teenagers and twenty somethings and too simple for everyone else. Plus it had the unfortunate coincidence of debuting when Game of Thrones was the series de jour against which anything –especially anything with swords- was likely to be unfairly compared with. Then the series lost its biggest acting asset when Peter Capaldi became otherwise engaged, his scheming Richelieu having been the definite highlight of the first year.
Season two then addresses these issues head on. It dispenses with any attempt to snare the kids/ family audience the likes of Atlantis or Robin Hood went for by cutting japery and concentrating on serious life and death, love and loss storylines.  It also caters for those who prefer arc plots and developing scenarios by bedding several into a narrative that gives each recurring character something to chew on. Replacing Richelieu is Rochefort played by Marc Warren, a more mobile and vicious antagonist who averages a couple of cold blooded murders an episode as he kills and schemes his way to the top. Each of the Musketeers had issues to deal with from D’Artagnan’s love for a married woman, Porthos’ search for his father, Athos continued complicated relationship with his former wife MiLady and Aramis of course being the father of the Dauphin. The thorny issue of what to do with the excellent (but last season underused) Constance is resolved by placing her right at the heart of court as one of the Queen’s trusted assistants.


These plots are woven with skill throughout draw performances of much more depth from the central quartet, a long way from the banter of last year. Marc Warren proves an invaluable find. His Rochefort brings palpable tension to the screen that successive directors play on. By the end he is creepy, scary and memorably bad. Rochefort’s plan proves to be more interesting than Richelieu’s’ tinkering was and becomes a very threatening physical thing as the Queen herself is put in danger. Both Alexandra Dowling and Ryan Gage excel as the rulers of France too, the former remaining defiant as plots unfurl around her, the latter turning into a gibbering wreck as Rochefort spins his web.


While there is still plenty of action, especially during the early episodes which include some great stunts and set pieces, it is noticeable how the pace slows to echo the tightening noose around France; the last two parts in particular are a match for most GOT episodes. Perhaps this show has been taking notes as the series increasingly displays some of the timbre of Throne’s slow pacing, sense of presence in every sound or flash of light. So all in all then, The Musketeers’ second season is an artistic triumph.
Then someone puts it on Sunday night and keeps taking it off for live events. The reason for the renewal given seems to hint at a much more appreciative worldwide audience but scheduling and marketing seemed to ensure the quality of this second season was hidden from view in the UK. Ratings were around the 4 million mark but somehow the show hasn’t become hip enough to make that leap into the virtual world of Twitter love so it languished in an inappropriate place in scheduled television.  Just as they did with - the admittedly far weaker- Atlantis, the BBC must have spent a packet and then almost seemed to chuck it away cheaply. So you can bet there were some mutterings when the show was renewed. It seems reminiscent of Ripper Street another superbly made – but dark- show that the BBC seemed to lose interest in. It makes you wonder why the people who commission these shows are not able to see them through a healthy life rather than having to abandon them to people who don’t care as much.
The good thing about all this is that the third season can do what it likes. This is surely not a show that was ever destined for a seven year or longer run because it would become repetitive however a third season in which the producers and writers don’t really have to worry about ratings could be a real corker, even better than the second. The Musketeers unleashed! Now that is something to look forward to!