Doctor Who Death in Heaven


08/11/14: Starring: Peter Capaldi, Jenna Coleman, Samuel Anderson, Michelle Gomez, Jemma Redgrave, Ingrid Oliver, Sanjeev Bhaskar/ Written by Steven Moffat/ Directed by Rachel Talalay
Reviewed by Sean Alexander
That noise you just heard was the Internet exploding; or was it the Nethersphere being hacked for its nude photos of Jennifer Lawrence..? Now, let’s get just one thing straight: this series of Doctor Who has been the best for several years, with a new Doctor bringing some much needed gravitas back to a role that had become far too often a vehicle for overacting (David Tennant at his worst) and childish buffoonery (Matt Smith on default).  Jenna Coleman has also risen to the occasion with the opportunity to make more of what was previously a fairly generic companion role (bar her ‘impossible girl’ meme).  The season long arc was nicely worked in from week one and there have been some standout (‘Listen’) and scary (‘Mummy on the Orient Express’) returns to form recalling the kind of classic yet emotionally infused highlights of the Russell T Davies era (and, in the case of ‘Mummy…’ and ‘Kill the Moon’, some proper Hinchcliffe/Holmes 1976 frights).  Despite the graveyard post ‘Time Heist’ slot against Cowell and co. the programme still performed well (especially on the catch-ups) and reviews have been largely glowing and respectful (we’ll just put ‘In the Forest of the Night’ down to first-night nerves, shall we?).  Hell, I even liked Danny Pink. But here’s the caveat.  And it’s a big one. 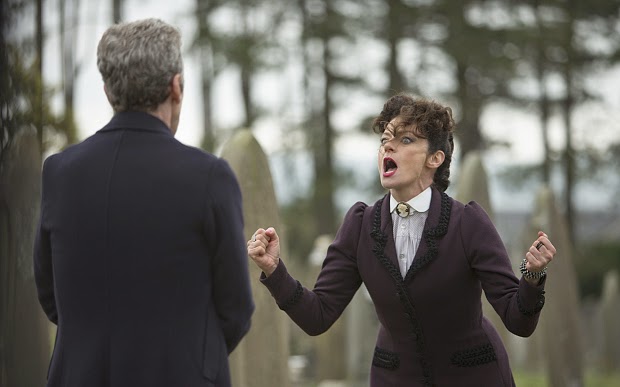 Taken as a whole ‘Dark Water/Death in Heaven’ is a bloody awful mess on the scale not seen since a certain Welshman of six-foot-plus and a predilection for saying ‘Hooray!’ last put finger to keypad and typed the words ‘Doctor Who’.  Take a cursory look back at those season finales under the aegis of Russell T Davies (excepting Eccleston, as there was nothing else to compare it to at the time) and we have a catalogue reading ‘Doomsday/Last of the Time Lords/Journey’s End’.  All preceded by first parts that promised much and ended on a ‘game-changing’ cliff-hanger (Daleks vs Cybermen/Old age Doctor & Master ruling the world/regeneration interruptus).  Likewise with ‘Dark Water’ and the Internet-melting revelation that the Master had dropped a ball (or two). So, without dwelling too much on John’s fine account last week, here – through gritted teeth – are just a few brickbats (and maybe a few bouquets) I’d like to solidly aim at this year’s magnum opus.
1/ Okay, the pre-credits sting where – in grand Buffy ‘Superstar’ style – we get the leftfield suggestion that Clara has, during all this time, been a creation of the Doctor and is in fact the Doctor (to rub this in with some fan-baiting ointment there’s even a shot of Coleman’s eyes in the title sequence).  That this gets dropped pretty damn quick only adds to the pointlessness of it.  It’s as though Steven Moffat is giving Twitter-happy trolls fodder to test their server’s bandwidth…
2/ The pop-culture references, not seen to this extent since the big Welshman went off to LA, take on a stratospheric scale to match the EPIC and GRANDIOSE spectacle that gives the BBC Facebook page its soundbites after each episode.  In no particular order: selfies, data-clouds, for the fans visual references to ‘The Moonbase’, The Silence of the Lambs, Thunderbirds and Gerry and Sylvia Anderson, Michael Jackson’s Thriller!, Toni Basil’s ‘Hey Mickey!’, the hive mind of The Next Generation’s Cyber-clones the Borg, Mary f**king Poppins, and a coda leading into Christmas starring Santa Claus no less.  If I’ve missed any please feel free not to bother mentioning them.
3/ Ninety-one Iron Man Cybermen spreading their pollen over the graveyards and cemeteries of ninety-one major towns and cities in the UK: WTF???
4/ Sanjeev Bhaskar with perhaps one of the shortest and most pointless guest parts in the revived show’s history.  I just hope his anecdotes to the grandchildren are worth it.
5/ Chris Addison, clearly auditioning for the role of the 13th/14th/15th (delete to taste) Doctor with more gurning and facial tics than an entire season of David Tennant out-takes.  And to think people thought he was the real Master.  Tsk.
6/ Clara – ‘the girl born to save the Doctor’ – DOB: November 23rd.  Well, obviously. 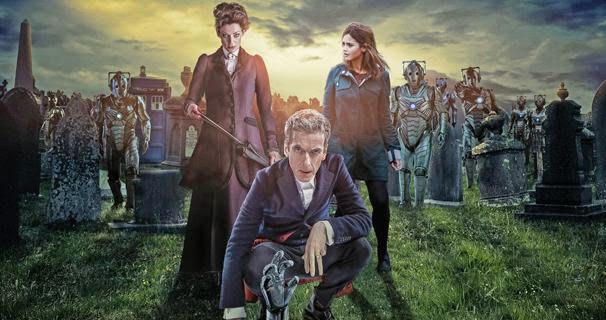 7/ ‘Dark Water/Death in Heaven’ having the exact same plot of ‘Army of Ghosts/Doomsday’.  The other-worldly barrier between this reality and the void/nethersphere, shots of postcard capitals under threat and/or being freed from a global invasion/catastrophe, an emotion chip being a handy plot-device, a post-coda sting in which a famous comedian/enne gate-crashes a companion’s leaving scene. Are we sure Moffat didn’t just take a summer holiday and speed-dial Russell to fill in..?
8/ ‘Say Something Nice’.  Well, I’m trying.  But it’s not exactly ‘I Am the Master!’, is it? Still, at least Michelle Gomez clearly enjoyed chewing through the scenery flats…
9/ Okay, in a dark season and an even darker (at least in tone) season finale, you pull the rug from under the viewers’ feet by…killing off the least liked element from the anniversary episode last year and thus annoying absolutely no one.
10/ Dan Dan the Cyberman.  Yes, it’s touching (in an overwrought Love, Actually kinda way) but is this really the arc that Samuel Anderson signed up for?  The soldier/officer parallel between Danny and the Doctor has been a nice bit of subtext (especially given the former War Doctor’s role in the Time War), but the sight of CyberDan marshalling his Cyber-brothers was in retrospect perhaps a metaphor too far.   And what about all the other recent dead downloaded from the Nethersphere only to find themselves as also-rans in an Iron Man contest?
11/ Aah, flashbacks – the sure sign of a forty-five minute script struggling to fill out a one hour timeslot.
And fittingly, to mark the twelve Saturdays of Series 8…
12/ The Doctor, perfecting a dive from an aircraft in true Moonraker fashion and managing to aim a Yale key into a Yale key-sized keyhole whilst plummeting at about a hundred feet per second.  Why didn’t he just click his fingers, or has the 2,000+ old Doctor finally developed a bad case of arthritis..?
Cheating now - 12 and-a-half/ The memory of Nicolas Courtney forever being tainted by the thought that his iconic Brigadier now travels the universe as a CyberCorpse.
Okay, so I lied about the bouquets.  Like Clara lied. Like Moffat always does.  But still room for a couple of plaudits: Capaldi and Coleman somehow managed to retain the dignity and spark of their new Doctor/Clara combination that they’ve put such bloody hard work into this year.  And the sight of Capaldi smashing the TARDIS console into bits having been lied to about the coordinates of 10-0-11-0-0 by 0-1 (from galactic zero centre) gave an unexpected chill.
So Doctor Who ended its run on a bit of a downer.  Nothing new there, whether for fans old or new.  So let’s just draw a discrete veil over a series finale that fortunately failed to spoil what has been a genuinely creative, innovative and surprising dozen of Saturday evenings/nights.  There doesn’t seem anything wrong with the show right now bar this needless urge to pander to the spectacle rather than the spectacular in order to resolve its carefully seeded storylines.  But plus ca change plus c’est la meme chose and all that.  Like light and dark, good Doctor Who cannot exist without bad.  And there’s been plenty more of the former than the latter this term.
But if Nick Frost turns out to be the genuine Santa Claus I will NEVER (sic) watch this show again.  Over to you, Gallifrey Base…