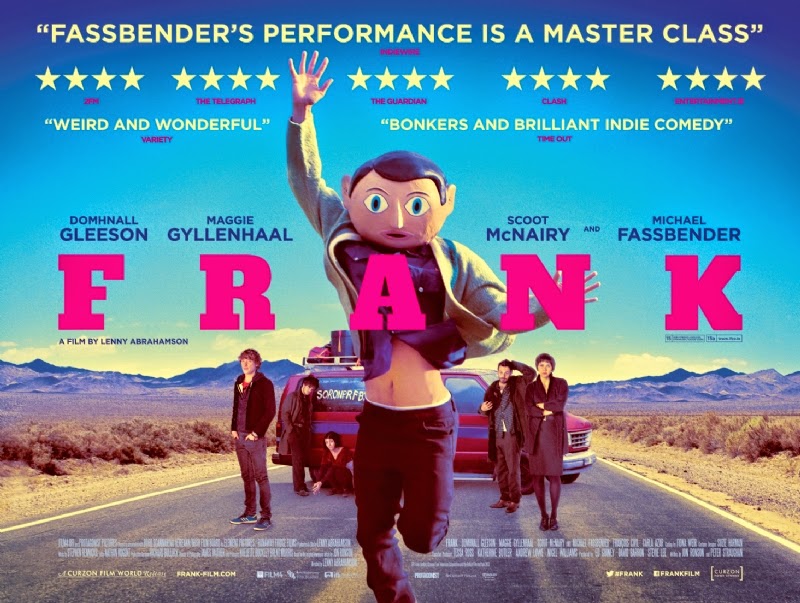 Having watched it it’s as difficult to say as Soronprfbs. That is the band’s name and far from the least odd thing about them. Apart from Frank himself (whom manager Don at one point describes as the  sanest of them all) there are a trio of sulky enigmatic musicians plus Jon who is the film’s protagonist. He joins after watching the previous keyboard player try to commit suicide. Like most matters concerning this band his hiring is casual and takes him by surprise but once ensconced in a woods somewhere in Ireland ostensibly recording, he starts You Tube updates of their (lack of) progress which inadvertently attract enough interest to get them invited to the famous South X South West music festival.
It is none other than the ubiquitous Michael Fassbender in the title role groaning and grooving like some subterranean Mark E Smith as the group grapple with musical ambitions that go beyond pretentious and into the realm of the senseless. It is terrific fun of course to watch all this going on as they bicker and stew, record `found sounds` in the outdoors and spend eleven months preparing before they even start  making the album. During this drawn out process Jon grows an enormous beard, the manager goes off the edge and Frank manages to wield an un-nameable charisma on everyone.

If it sounds ludricous it is, but the cast and Lenny Abrahamson’s non showy direction sell it in buckets. Michael Fassbender has played some odd roles but this must be the oddest. Would it matter if it were anyone else under there? It may do, there is something about the way it works that is perfect. You feel that just as Frank himself conveys something un-categorisable over his band mates so Fassbender draws us into this scenario.  As Jon, Domnhall Gleeson has to be likeable enough to keep us watching- and because nobody else is any way likeable- but sometimes selfishly motivated and in another impressive addition to an eclectic cv he does a great job. Maggie Gyllenhaal is excellent too as the theramin playing Clara who seems like the most dangerous band mate possible and there’s a great turn from Scoot McNeery as the band’s unhinged manager Don.
There is certainly some truth in the script, adapted from Jon Ronson’s book, whether in touching on the idea of the madness of the artist or in the minutiae of inter band relationships and methods employed to try to be diverse. There’s a great scene in which to soothe Jon’s concern that their abrasive music is not going to get anywhere Frank unveils what he calls his most likeable song ever. It’s not very likeable of course!
Yet Frank as a complete movie feels a little out of reach, almost as if it is playing some game with us that we don’t understand. In a way this is how you want it to be; it is close to a disappointment when the last few scenes play up conventional storytelling to provide a feel good ending. The mask comes off; literally and figuratively and it turns out to be no mystery at all. You need to be in the right mood for Frank but if you are, it’s a riot.