The first Captain America film stood out from its Marvel contemporaries by virtue of its period setting which imbued it with a different tone. Now this follow up distances itself from the many other superhero movies around by matching impressive action sequences with a contemporary political edge.  Even more so than the Iron Man films which certainly acknowledge the real world, The Winter Soldier is a political thriller of some heft for this genre managing to address an issue that sits at the heart of US foreign policy; pre-emptive intervention against perceived threats.
Warning- Major plot spoilers in the rest of this review 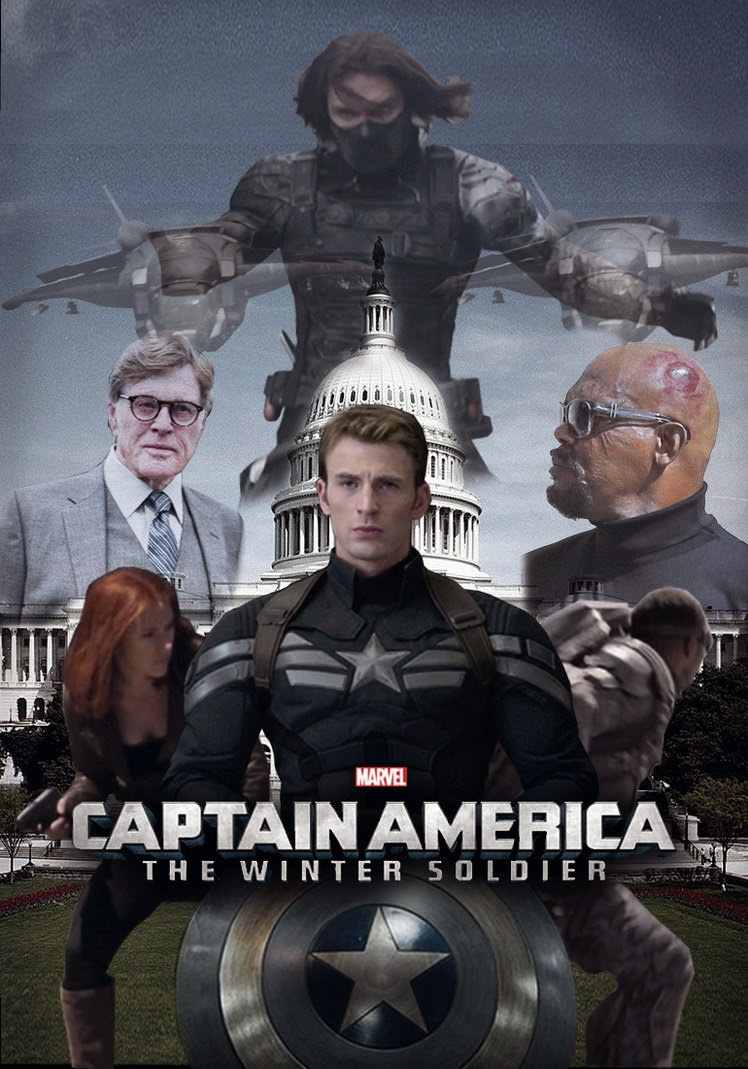 The best stories have antagonists who are doing what they think is the right thing and if you listen to some of the arguments in this film you’d be hard pressed to pick a side. When Captain America declares that he intends to destroy not just old nemesis’ HYDRA (who have turned out to have been working undercover inside SHEILD for decades) but also SHIELD itself the message of the film is clear. While HYDRA’s plan to wipe out hundreds of thousands of potential terrorists is clearly wrong the reasons behind it are presented coherently by Robert Redford’s corrupt Alexander Pierce.  Because he represents old fashioned values Steve Rogers simply cannot countenance such actions and as he delves into a layered conspiracy (“trust no-one” Nick Fury tells him) his simple values become a beacon around which he can rally help. The film’s dialogue scenes thus eschew the usual superhero mix of banter, boasting and brooding in favour of nuanced arguments around the subject of how to deal with the on- going threat to the world and how much we can trust people these days.
If the Captain sometimes seems unable to keep up with the minutiae he remains true to his core values. Of all the Marvel superheroes he could easily turn out to be the cheesiest, most one dimensional yet the films have made Steve Rogers a far more identifiable figure than any of his fellow crime fighters. Essentially he represents ordinary people trying to make sense of the complexities of the world. Perhaps because of this he has been labelled `dull` by some critics who prefer the wisecracking Tony Stark or the darker Batman but it is hard to identify with such larger than life characters. If this makes Steve Rogers dull by comparison then don’t blame the actor; in fact part of the reason why it translates so well on screen is Chris Evans’ performance which manages a balance and is not without levity and self-awareness.  It’s possibly too subtle for fans of this sort of film but the Captain is essentially a reluctant hero doing what has to be done. For someone so symbolic of America he seems almost British!


Other characters are well defined too. Scarlett Johansson’s Natasha Romonoff aka Black Widow is cool and efficient representing a different approach and always giving the sense that she has something to hide.  Samuel L Jackson gives his best Nick Fury yet living up to the character’s surname while playing a critical role in proceedings. There is also a fine performance from veteran Robert Redford who relishes the opportunity to delve into what is a refreshingly nuanced antagonist for this sort of film. Anthony Mackie is also excellent making the most of what is essentially a sidekick role as the Falcon.
Perhaps because it is no surprise to the audience that the Winter Soldier himself, a Soviet agent of decades standing, is none other than Bucky Barnes (Rogers’ old wingman) it is the films’ only stumble that this reveal lacks the  necessary impact for the narrative and is dealt with rather perfunctorily. What we do see is good suggesting Sebastian Stan should have more screen time once the mask has been taken away.
The movie as a whole is well calibrated to punctuate the political debate and tales of deception with dazzling set pieces. Stand outs include a vicious attack on Nick Fury, a fearsome chase through the city and the tension filled climax aboard three massive super powered aircraft.  Compared to the completely overblown climax to last year’s Superman film which is an example of how not to do it this final act hits all the right marks in terms of choreography, scale and impact.
An engaging pleasure from start to finish The Winter Soldier has set the bar high for this year’s blockbusters.