The killer is revealed…..

In the rush of speculation guessing who the guilty party will be, it is easy to lose sight of how such an event affects any community and it is to Broadchurch’s ultimate credit that Chris Chibnall manages to draw us back to that. By revealing the killer half way through this final episode he is then able to show us what it means for those in close proximity and the sort of uncomfortable closure these things inevitably bring. As we’ve come to expect matters unfurl at a stately pace and if you had already worked it out it doesn’t detract from the power of the finale.


So it was Joe Miller. Last week’s episode gave us some big clues but the series is not just about whodunnit. It’s about community and interdependencies. Throughout it has nailed salient points; how most murders are committed by someone the victim knows, how families always keep secrets from one another, how comparatively isolated seaside communities seem to be, how the media can be more influential –for good or for bad- in such situations. Most tellingly of all, it shows how easily these factors can create a groundswell of vigilante style rough justice. Wrapping these things into such an elegant package is stronger than had it been presented in a rougher, grittier style.

The story mixes old and new technology (a local newspaper plays as significant a part as do smartphones), the values of previous and current generations (religion versus no religion) and the provincial compared to the urban. In what is, if you examine it, a fairly broad sweep of characters Chris Chibnall manages to create some full blooded people that we really feel we know in a short time. They may seem overly familiar at first but as matters unfurl they become something more.

Of course the narrative is helped by some exquisite direction and superlative acting. There are lots of memorable flourishes that spring to mind from Mark’s walk through the village in the first episode to last week’s slow pull in through the window of Susan’s caravan. This week we travel back 59 days to the night of the murder and there is a shot that appears at first to show Joe and Ellie hugging but as we get closer we realise it is not Ellie but Danny. Near the end Ellie stands in a field, shell shocked and staring at the Latimer’s house when Beth emerges and says to her exactly the same as she asked  Susan last week; “how could you not know? “This is really the signature sentiment of the series; not just in the case itself but the number of secrets that its aftermath uncovered. 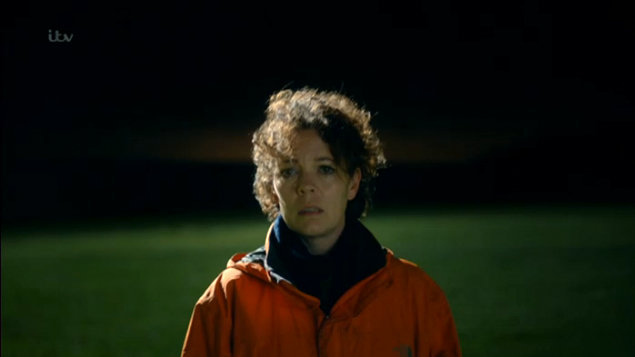 The cast deliver some standout performances, so much so it seems unfair to single anyone out. This week though Olivia Coleman is outstanding; you wonder just how an actor can express how someone in that situation would feel yet she manages to channel it somehow. Matthew Gravelle too as her guilty but confused husband is written as confused and unsure of why he did what he did unlike so many tv dramas that depict a criminal handily summarised and bracketed. Like the series’ other key moments, Chibnall deftly avoids labelling and neat conclusions while still managing to satisfy dramatic priorities. In the end the lighted beacons organised by the Rev Coates are a strangely pagan ritual for a man of the cloth signifying the way the series has ebbed from one aspect of life to another.

In a tv world obsessed with fast pace or so called gritty drama the fact that a series like Broadchurch can grip a large audience is reassuring. You will probably see dramas with more sordid secrets, brutal scenes and bad language this year but it is less likely you’ll see a show as classy or compelling as this one, a show that works on its own terms and draws you in. Whatever else is on in 2013, Broadchurch will remain one of the shows of the year.

PS `Broadchurch will return` we are told at the end of the credits though it’s difficult to see how. The 8 episodes are so complete, so perfect that bringing the show back runs the risk of turning it into some sort of soap opera. Would another murder like this be a likely or believable thing for such a small place? Do we really need to go further with the characters? I’m reminded of Whitechapel, a fantastic series but one that made the mistake of making a second series too similar to the first. It seems a disappointingly commercial decision. Mind you, perhaps Danny was still alive when Joe left him on the beach and….