Currys PC World has changed it’s name..to Currys. This is the theme of their new advert which has the tagline “Say hello to Currys”. It’s a bit of a mix and match this one still using the old musical motif, pushing the rebrand yet starting with a series of clips showing accidents in the home, the sort of video clips you’d see on You’ve Been Framed. “I’ve got this – the three most dangerous words in the English language” says the narrator who calls for people to consult experts rather than doing it themselves. Most oddly of all The Stranglers have been chosen for the background music. It’s a curiously off hand way to approach the name change especially as they offered just the same remote tech advice service before. Basically, nothing has really changed except the PC World bit of their name has gone and the remaining `Currys` has a new font. As its only 13 years since the dual name was introduced it’s not exactly a shock in any case. The ad does seem a little last year too focussing on their online tech help when you can actually now go into the shops and talk to people. This very laptop I’m typing on was bought with considerable help from someone at Currys’ PC World last year just a week before the first lockdown.

Created by AMV BBDO the advert doesn’t just reflect the loss of the PC World brand it also underlines the fact that the Currys name now also includes Carphone Warehouse, Dixons Carphone and quite possibly PC Carhouse! Currys is undoubtedly a simpler name even though it is also associated with Curry, the food. The new logo was created by Futurebrand who’s website tells us the new look is “an identity that reflects the new brand vision and captures the characteristics of the brand: modern, stunning, infectiously passionate, smart cookie and witty. The new bright and optimistic logo and brand world reflect Currys’ passion for helping everyone enjoy amazing technology.” It took two years to develop and you do wonder quite how a lower case word in white on a circular blue background can actually take that long. Curry’s themselves say about the advert’s focus on technical assistance -“Our research shows that prior to handing over their hard-earned cash, people want advice about the tech they buy from a real-life human expert, particularly when it comes to those expensive and more complex pieces of kit.” Quite. I went to another company and it was all green skinned aliens with tentacles running the place. The ad’s ok but I preferred the previous one with Bill Bailey flying with angel wings which was rather more distinctive.

In the current Lenor advert running for some months now, three suburbanites are seen singing in a musical theatre style asking “Where is the Sun?”. Because it is raining, one of them can’t line dry her daughter’s outfit while another has a quite unfeasibly high pile of laundry that “smells like an armpit”. Best of all a bloke sings with an operatic flourish about how he’s “running out of briefs” and decides to spin around.  He really gives it some welly. Yet despite this weather forecast we see one of the women has already put her washing out and is seen disappointedly pulling it off the clothes line in the downpour. Then they all stand there- in the rain getting themselves and their washing even wetter.

Adverts that invent a word are to be encouraged and this one is for product called Outdoorable!. Lenor say this product gives a freshness you’d normally only get if you hang your washing outdoors to dry. So, you’re asking, how does it do that? Well according to Lenor’s website it uses “Spring Awakening scent with marine notes, citrusy goodness and pure breeziness”. Which sounds like it contains fish, oranges and fresh air. Which is not really how you’d like washing to smell after it’s been line dried. 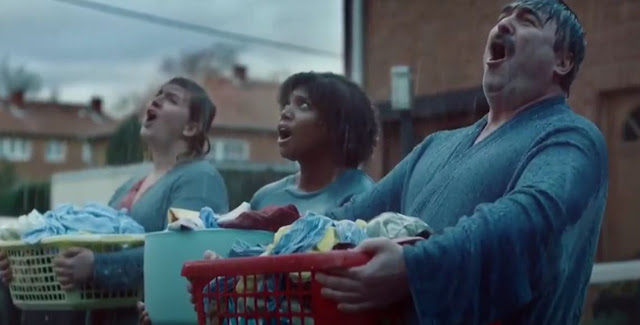 Like the products they promote, adverts have a shelf life and sooner or later are overtaken by a new campaign. So it is sad to see that the Money Calm Bull is no more, jettisoned in favour of The Money Super Seven. I’m sure the Bull took it with his usual aplomb but it’s a poor replacement. The so called Super Seven each represent different things that Moneysupermarket offer to highlight all the savings you can make. Yawningly they are presented as secret agents of some kind but compared to the eccentric angle the company has previously employed it all seems a little ordinary and cluttered. The company describes it as a “tongue in cheek Bond / Mission Impossible / Ghostbusters mash up”. Another campaign that has really veered away from what made it work is Confused.com whose previous effort was already somewhat over laboured. Now they’re attempting a surreal sequence set in someone’s head only they’re now confused over the smallest things imaginable like the difference between “affect” and “effect”. These latest ads maintain the rather smug attitude that came over in the previous ones where that woman was virtually gloating over other people’s misunderstandings.

We’ve got used to talking Russian meerkats in recent years as the Compare the Market ads continue to pour out a rate of knots. They’ve been going for nearly thirteen years now, the first one was released in January 2009 and the current one is the 126th would you believe. Alexsander Orlov and his out upon aide Sergei are both voiced by Simon Greenall, who was also amongst other things the caretaker in fondly remembered CBBC show Trapped. Inevitably with such a large output there are hits and misses and sometimes these are miniature works of art. I particularly liked the new neighbour one with Antoine D’Orleau and his reaction of “ooh la la” to everything. The latest one seems to be hinting at an expanding meerkat universe with a group of other anthropomorphic animals whose ideas to help with saving money are criminal ones. Its superbly made with hints of Guardians of the Galaxy about it. The thing is you could easily imagine animated adventures with this lot especially the one that could be a lemur. There are more ads to follow featuring this motley crew.

Kristin Sonfield, head of brand and communications at comparethemarket.com, says about the campaign: “This is a step change for our brand, as we evolve to become the front door to people’s household finances and offer them ways to meerkat their money. We’re hoping loyal followers of the meerkats will love the next chapter of the story as much as we do.”