Virgin’s recent two ads for their latest stuff have been brilliant! First there was the idea that various characters and vehicles from very strand of television were charging together up the pipe which resembled a tunnel. The latest – called `Entertainment in Harmony` was launched at the turn of the year and created by BBH London. It is even better drawing in iconic modern TV types and then making them dance! It starts with the declaration “That chick is a sick individual” and the music - Missy Elliott’s 2005 track `We Run This` - kicks in. The premise is similar to the previous ad bringing instantly recognisable tv types together this time in dance. So it starts with Orange is the New Black, then The Walking Dead, Game of Thrones and so on.  There’s even a detective and his team and when they start dancing so does the white outline of a body on the floor in front of them!


The full length ad includes cartoon characters from Paw Patrol, Usain Bolt (who apparently is Virgin Media’s brand ambassador) and footballers. The result is a hugely colourful, funky and irresistible package which I imagine is how Virgin see the actual V6 box which allows you to record up to six programmes at once though who has time to re-watch them all? They’re certainly enthusiastic about it.  “Whether it’s watching prime-time entertainment with the family, catching up on nail biting drama or binging on a Netflix box-set in 4K, our V6 box offers the best way to watch the best TV,” gushes Kevin Bright, the company’s chief marketing officer. At least it probably is until 5K and the V7 Box pop up!! 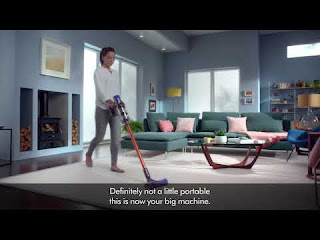 So some adverts have dancing zombies while others take a less hectic approach and for a while now vacuum manufacturer Dyson have shaped their ads around their founder Sir James Dyson. As anyone who regularly vacuums knows it is one of the least fun tasks in life and various innovations over the years have done little to alleviate this. Dyson’s latest offering is the Cyclone V10, a cord free vacuum, with the power of an upright yet also the most powerful suction of any cord free model to date. It is also, according to the blurb “acoustically engineered to divert direct sound and improve airflow, so reducing noise”. Dyson has so much faith in this device that upon its New York launch last month he declared that the company has now stopped developing corded vacuums. This is repeated in the advert itself. It is rare for a company to include news of such a step in an advert and means that the V10 is going to have to succeed. The ad itself is not particularly exciting. Unlike cars which can seemingly lend themselves to all kinds of genre adverts, vacuums cannot believably turn up in a spy, sci-fi or adventure scenarios and the ads must be the only ones left which are fronted by a bloke in a pullover. Yet in its own way this ad is significant in marking a step change in something we all have in our homes.


Purplebricks- “Gareth is a liar!”


It’s not often an ad invents a word but Purplebricks’ `commisery` has been around a while now. The idea is that people think the estate agent is “just online” and therefore don’t use it. Clearly aimed at older people (youngies would presumably be quite ok to use an online firm) the result is that they pay commission elsewhere and are not happy about it when someone informs them. They have “commisery”. Variously they put their face in a cake, pour something over themselves or in the most memorable ad a father seethes about it during a wedding speech. He says how nice everyone is happy rather than “absolutely furious” and calls his new son in law Gareth “ a liar” for telling him Purplebricks are just on line. They are he rages “real people”. They just don’t charge commission.


However are they just online really? Have you ever seen a Purplebricks shop on the high street? You won’t find any. So how do they get away with claiming they are not `just online` ;surely other online estate agents are also real people? This year the company has been embroiled in controversy with claims from stockbrokers Jefferies that they only sell half their homes yet the company claim they have a 78% success rate. Purplebricks was formed in 2012 and is said to the UK’s fastest growing estate agent. Whatever the veracity of the claims and counter claims the adverts are refreshingly different.


Bad Ad: Confused.com started so well but their ads have deteriorated over the years and now feature James Corden driving into Las Vegas and bits of his car flying off. The actual point of these “driver win” ads escapes me. There was one where he got some petrol and for some reason this was a “driver win” but he literally didn’t do anything. This time he and his mate are packing a huge wad of cash only to lose nearly all of it due to their souped up car blowing up twice and having to pay a creepy repair man lots of money. Then they’re coming back having won lots of money in Vegas. But how is this anything to do with car insurance? They were just lucky in a casino!!