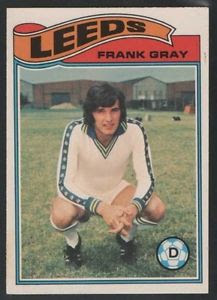 
[31] Junior: Mama Used To Say. Simon Bates snubs Frank Gray. It's worth watching his face as Simon Bates chats with Kevin Keegan. Frank Gray's smile flickers and becomes a tad strained as he realises that he's not going to be asked any questions. I don't know anything about football and in my naiveté I did a quick Google search for Frank Gray England and was confused by the lack of any meaningful results. How was I supposed to know he played for Scotland? During Junior's performance a quick crowd shot reveals a group of women dressed as British Airways air hostesses. Their presence will be explained later.

[34] Depeche Mode: The Meaning Of Love. Next it's the "new line up" Depeche Mode. Yes it's true Depeche Mode have split. Vince Clarke has run off with Alison Moyet to form Yazoo. To be honest they seem pretty much like the old line up. Although it's hard to tell. Fred Wright is lighting the studio in shades of purple this evening and it's making my eyes go funny. (John- So what’s Frank Gray doing then?)


[2] England World Cup Squad:  England, We’ll Fly The Flag. When we cut back to Simon Bates he's marooned (literally, damn this purple lighting) in a sea of Union Jacks, British Airways hostesses, and an old man. Simon Bates introduces the old man as Ken Bailey, "and he's the guy who deprived you of that vision you might have seen on BBC1 if he hadn't covered  Erica Roe's...um... Erica Roes". Google Erica Roe for more information. Do it right now. Especially if you're at work. The upshot of this long and rambling anecdote from a Twickenham rugby match is to link into the England World Cup song. Of course it is. The song is dreadful, natch, but bafflingly it actually manages to be worse than the one played two weeks ago on the 22/04/1982 edition presented by Peter Powell. This is the b-side -tweely described as the Second Half on the single- to This Time (We’ll Get It Right)   and it's just an advert for British Airways. The chorus is British Airway's advertising jingle crammed into the song as many times as possible.  Apparently changing a single word from "you" to "them" is enough to utterly bypass the BBC's editorial filters. I'm actually surprised that this was played on BBC1 or were British Airways covering the costs of 1982's Blue Peter expedition to Canada? On the plus side, Fred Wright has to turn down the purple lighting to allow the red, white, and blue of the flags to shine through. Towards the end of the song we cut to some football footage and a chance to marvel at the pitch-side advertising of yesteryear; Lemsip for Colds; Citizens Band Radiomobiles; and Bulls Blood (hopefully the wine rather than a controversial Benetton-style advert for ITV's Bullseye). (John- At this point a bazooka was confiscated from Frank Gray)


[3] PhD: I Won't Let You Down. At the start of the song the camera pans along the side of the stage. There are two smartly dressed men standing right in front of the camera and the older of the two stares right into the camera in the brief moment it passes him. The man is quite thin-faced, wearing glasses, with dark receding hair. He's only on screen for an instant but it looks a bit like Sir Bill Cotton who in 1982 was deputy managing director of television. Did he fancy a trip down to the Top of the Pops studio to meet the World Cup squad? Or was he more of a Depeche Mode fan?


[27] Patrice Rushen: Forget Me Nots. (John- They’re playing Frank Gray’s song!) Fred Wright's lighting scheme involves lurid colours on the DJ introductions. Tonight Simon Bates has been purple, orange, red, and now purple again. I think there might also be some electronic enhancement going on. If you watch Simon Bates' chat with Kevin Keegan at the start of the episode the purple tones gradually assume a lurid almost radioactive glow without the intensity of the lighting ever changing. Either Vision Mixer Angela Wilson or Dave Jervis on Video Effects is sitting in the studio gallery fiddling around with the colour signal. Patrice Rushen meanwhile tries to worsen my colour addled state by singing the Men In Black song 25 years early.


[13] Scottish World Cup Squad: We Have A Dream. Pop quiz hot shot. What's worse than two dreadful football songs? This one is sung by Nelson's Column TV star John Gordon Sinclair. So is he to blame? No, a close-up reveals the true culprit to be gurning charisma void B.A. Robertson the man who (and this really can't be mentioned enough) wrote the really lousy theme tune used on the last series of Swap Shop.


[1] Paul McCartney & Stevie Wonder: Ebony And Ivory. Before the number one song there's a brief interview with Joan Jett. She's here to record a performance of I Love Rock ‘N’ Roll for next week's Top of the Pops. Sadly for BBC4 viewers this show was presented by D*v* L** Tr*v*s and so cannot be mentioned. Then, after the number one song it's... stone me it's actually Paul McCartney. Sadly he's not in the studio to clear up any lingering mystery about Stevie Wonder being CSO'd into the Ebony And Ivory video. He's just passing through on his way home and he wants to send his best wishes to "Heather who's just bust her leg."