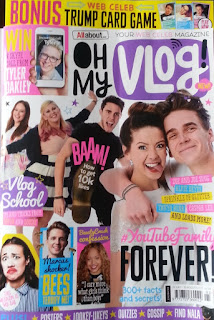 Well you just never know what you can learn in a day do you? Today for example I discovered the number of years Tanya Burr had piano lessons, that Zoella’s grandad has an Instagram account with 25,000 followers, that Marcus Butler has a huge phobia about bees and how I can get 10K Likes.
Exhausted with such a haul of trivia my brain was only just about capable of playing the Web Celeb Trump Card game. Life is so simple when filtered through the pages of a teenage magazine. If you don’t know what I’m on about then allow me to introduce Oh My Vlog the hilariously monikered glossy pop style mag about vloggers.
What you ask is the point about such an interactive of the moment media having a magazine about it but these people are taking to more traditional media nowadays. Several of them have books coming out. Dan and Phil have ended up with a regular Radio One show. So they are very much the pop stars of the day and glossy magazine coverage is the logical outcome. Oh My Vlog caused quite a stir if not a buzz last week with people initially believing it to be a hoax. Having now read it I can confirm that if I wasn’t already aware of some of the people in it I would consider it a hoax too. 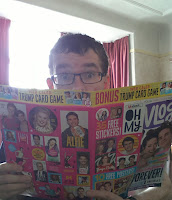 It is supposedly difficult to find in shops but my local Tesco had stacks of them so I thought back to the days when I read Smash Hits and how the writing in it influenced my own writing so I bought a copy. Nobody batted an eyelid assuming I suppose I was forced into purchasing it by my kids. Anyhow who doesn’t want 10K Likes? Shall I tell you the secrets they give away? Well, be fun and original. Know your audience, Find your `thing` (a theme or something) and stick to a schedule. Lordy, social media expert Rachel Whitaker who wrote this does like to crack the whip doesn’t she? She does neglect to mention it helps if you’re good looking, white and middle class.
Elsewhere in what is a rather thin publication for £3.99 we discover body language expert (sounds impressive) Judi James (from Big Brother…oh) telling us what various vlogger’s Instagrams say about them. Hang on, it’s not even about vlogging this page! There are posters of the vloggers galore and they all seem to know each other leading you to wonder if they all reside in the same house just like The Beatles did. The card game involves reading so may tax some but seems to suggest an endless escapade because once someone with the most cards win you have to Start Again. But really the game has little to do with vlogging though it does mention how many subscribers each has.

Never mind that the readers are asking, who has the highest Phwoarsomeness? Well apparently it’s Joe Sugg with 99%. Not bad for someone who used to thatch roofs. That’s why he’s called Thatcher Joe by the way not as I initially suspected because he is a fervent supporter of a former Prime Minister. There’s a rather dubious statement too under a fact page about this guy which declares “he’s the little brother we wish we’d had- if we didn’t fancy him so much.” What do they mean? So really –and of course we might have known- this is no more a magazine about vlogging than Smash Hits was a magazine about music. It’s personality led, it’s about trivia and the only pop mag cliché it doesn’t pull out of the bag is asking people what their favourite colour is. Some experts have decried the very existence of it but I’m reassured that it is nothing more than a modern version of the kind of nonsense teenagers have been reading for decades. Perhaps the perfect example of where it’s at is the revelation that Alfie Deyes has broken the world record for the most party poppers popped in 30 seconds. And that really is all you need to know.