Steve Wright, "hello, good evening. I'm Steve Wright, and welcome along to Top of the Pops, and the chart with Rodney Franklin [puckers lips in weird kissy-face]"


Smokie: Take Good Care Of My Baby [50].  A very lacklustre start to the programme. Over the past month Top of the Pops has started with Phil Lynot singing Dear Miss Lonely Hearts (no you didn't miss this, its sole Top of the Pops outing was on a J*mmy S*v*l* edition), The Undertones with My Perfect Cousin, Madness doing Night Boat To Cairo, and -god bless 'em- those zany funsters Liquid Gold with Dance Yourself Dizzy. Smokie doing a slowed down Bobby Vee cover just can't cut the mustard. The only moment of real interest is at the start of the song as the camera swoops towards the stage and the audience parts like the Red Sea to avoid being clouted. 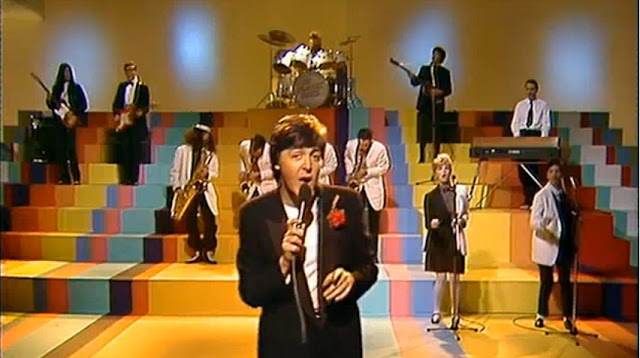 The Cure: A Forest [41]. The great thing about these Top of the Pops repeats is that it's like a musical roadmap. We've gone through punk, and post-punk, and new wave, and you can plot the development of groups like The Cure through earlier bands; most obviously Siouxsie and the Banshees, but there's also a pinch of Gary Neuman in the synthesiser noises. That's not to suggest The Cure are unoriginal but when seen in context like this it's possible to understand the route they took to developing their own style. They didn't just spring fully grown into the pop world like Athena leaping from the head of Zeus (culture). At one point Vision Mixer Carol Abbott turns on the Quantel comet trail effect and clouds of electronic smoke emerge from Robert Smith's head as if he was about to regenerate. But who would he regenerate into? Echo & the Bunnymen?
Elvis Costello & The Attractions: Hi Fidelity [30]. Apparently Elvis Costello & The Attractions were having a weekend away when a film crew turned up and demanded to make a promo film for Hi Fidelity. The resulting film seems to have been shot around the holiday villa where everyone was staying. The disruption to Elvis Costello's plans might account for some of the faces he pulls.
Sky: Toccata [11]. Toccata's introduction is so long that Steve Wright can back announce Elvis Costello, and then introduce Sky, and then predict that he thinks the song will break into the top ten, and the introduction still keeps going for another minute. The song itself remains awful, seemingly only released so that music teachers would have something to play in school lessons. "I know you all think classical music is boring but now I'm going to play something which I think might make you change your mind."
Sad Café: My Oh My [14]. A repeat from 20/03/1980. Cockney Rejects: The Greatest Cockney Rip-Off [47]. Three years after the rest of the country stopped caring about punk The Cockney Rejects' taxi finally gets the band to the Top of the Pops studio. I was going to make fun of The Cockney Rejects a lot more but their Wikipedia page makes the band sound quite hard.
Bobby Thurston: Check Out The Groove [26]. Uh-oh. Legs & Co have all forgotten their trousers. Looks like they'll have to dance in their pants. There's some videotape dropout during one of the shots of Lulu waggling her bum at the camera. Tape dropout often indicates damage caused bytape use. Did the VT department have to keep "checking" this section of tape to make sure it had recorded properly?
Bad Manners: Ne-Ne Na-Na Na-Na Nu-Nu [36]. Buster Bloodvessel is terrifying. A gigantic sweating hulk of a man, chanting gibberish. He strides across the stage like Dread  Cthulhu awoken and gibbering and slavering wordlessly on that terrible shore that is not of Earth. Perhaps if we chant  Ne-Ne Na-Na Na-Na Nu-Nu he will return to his endless sleep deep below the city of madness Stoke Newington.
David Essex: Silver Dream Machine [6]. Another chance to check out David Essex's Chopper. The Undertones: My Perfect Cousin [21]. A repeat from the 10/04/1980 edition. Johnny Logan: What's Another Year  [NEW]. What's that? Prima Donna didn't win Eurovision? No way! Well how about Luxembourg with Papa Pingouin? Eighth you say? *tears up betting slip*.  The song is followed by one of those insightful interviews that only Top of the Pops can provide. We learn it felt "fabulous" to win Eurovision.
Number One: Blondie, Call Me. A bizarre collision of still images, clips from the film American Gigolo, and an old Legs & Co routine. Official promo video not ready then eh Blondie? Closing Titles: Dexy's Midnight Runners, Geno. Perfomance of the week: Bad Manners: Ne-Ne Na-Na Na-Na Nu-Nu. Ph'nglui mglw'nafh Buster Bloodvessel R'lyeh wgah'nagl fhtagn


Tommy Vance. "Well hello there. Good evening and welcome to Top of the Pops, and we start with the charts and Mr. Leon Hayward."


New Music: This World Of Water [??]. It had to happen one day. The Popscene website which lists Top of the Pops programmes has gone down. All I know is that New Music are outside of the top 30, and probably going to stay that way. The band are distractingly CSO'd onto one of those fake rainy window panes*. The water droplets on the background all look too large, it's as if the band have shrunk.


Narada Michael Walden:  I Shoulda Loved Ya [19]. Live on tape from the blurry world of NTSC video. The trumpet player wins the who-can-wear-the-most-vile-shirt-on-stage contest. The guitarist has got one of those stupid double-necked guitars. What's the point of that eh? You can only play one at a time.


The Chords: Something's Missing [??] I'll tell you what's missing, a database of chart positions for songs from 01/05/1980. My glorious statistics. All ruined. I have caught an everlasting cold. The first line of the song mentions "the kids," and brings back horrible memories of Jimmy Pursey trying to stir youth into revolt. The Chords have been at The Brotherhood Of Man's rhyming dictionary you/do/true is followed by right/might and say/today. Bonus points to Vision Mixer Heather Gilder for the quick cutting between cameras on the repeated "you..you..you". Rodney Franklin: The Grove [13]. Legs & Co slink around in front of a sofa to the sound of some ghastly jazz piano.


Whitesnake: Fool For Your Loving [30]. "But I took all the heartache, and turned it to shame..." that's not a good thing Whitesnake. You're taking a bad emotion and turning it into another bad emotion. That's not healthy. No wonder you keep meeting hard loving women.


Jimmy Ruffin: Hold On To My Love [??]. The Top of the Pops studio has a metal crows nest as part of the set. Normally only DJs are allowed in there for their presenting duties but Jimmy has obviously been given special dispensation. Also in the crows nest is the Top of the Pops dry ice machine which has been set to pea-souper. Jimmy's feet must be freezing. Saxon: Wheels Of Steel [20]. A repeat from the 10/04/1980. Hot Chocolate: No Doubt About It [??]. RIP Errol Brown. In the month that he died it's good to be able to see him on stage performing, and wearing a pair of trousers that can only be described as magnificent.


Motorhead: Leaving Here [23]. Down at the front of the stage three fans head-bang away. The song must have been performed over at least two takes, once with the standard studio cameras and once with a hand-held camera, and the trio keep flinging their heads around. Now that's dedication. When the recording was over, I'll bet they needed a nice sit down and a mug of Bovril in the BBC bar.


The Nolans: Don't Make Waves [25]. No sign of the three head-bangers for The Nolans.


The Beat: Mirror In The Bathroom [??]. So far this has been a fairly dispiriting show (and a very rock focused one, which makes me wonder how much influence the presenter has on the line-up. Tommy Vance being Radio 1's Mr. Rock). Fortunately here come The Beat to save the day and breath some life into things.


Kate Bush: Breathing [29]. Poor Kate, there she was relaxing at home when a camera crew turned up and demanded she record a promo video there and then for her new single. Luckily Kate rises to the occasion and you would never know she'd had her quiet evening at home disrupted.


Number One: Dexy's Midnight Runners, Gino. Top of the Pops, like an oil tanker, is difficult to turn around but it's something these last three songs have done. Meanwhile, in set design news, Top of the Pops now has a special stage just for the number one song. That's fine now when you're in TC1 but how are you going to fit it in when you're in one of the titchy studios? Closing Titles: Johnny Logan, What's Another Year [15]. Performance of the week: The Beat: Mirror In The Bathroom.

*if you know what these things are called please let me know. There's one in an episode of Friends where Joey sits behind one and the camera pulls back to reveal it's not a proper window. I've tried to find the correct name by typing five different search terms into Google now I'm all out of ideas.