Doctor Who: The Crimson Horror

I suppose you’d expect a Mark Gatiss penned episode to be like this. Oscillating between humour and horror, full of period detail yet as pacy as any contemporary episode and at its heart a good, almost old fashioned Doctor Who sort of idea. Even so, it’s a refreshing predictability given all kinds of new spins. `The Crimson Horror` turns out to be the best script he’s turned in for the series which surprised me because I’ve always particularly liked `The Idiot’s Lantern` and just three weeks ago he successfully revived the Ice Warriors. `Crimson` beats them by a whisker because it is just so entertaining. 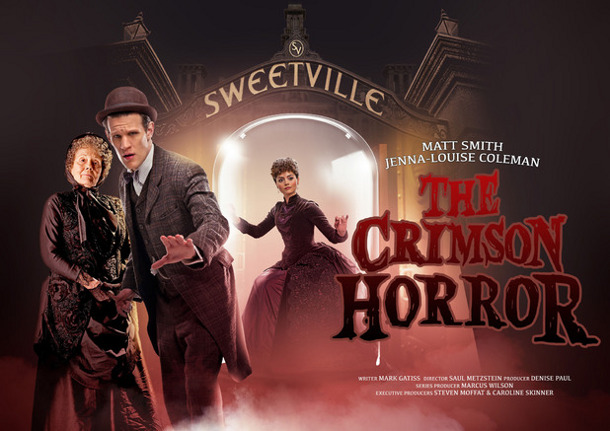 One thing that has never occurred is how infrequently the Doctor goes oop North. Even in the more cosmopolitan modern series, he may have zipped up to Scotland or Wales but still the North is somewhere he avoids. Even when he himself had a Northern for one incarnation. Is it because the TARDIS translator can’t cope with Northern accents? Anyway, with just one establishing shot (I’d not noticed till The Guardian pointed it out that the location and year is ingrained in the opening tableau by the way) we know where we are. The nature of the threat; the titular terror is evoked at every opportunity- they should really have called the episode `The Crimson `Orror`!

Gatiss draws from the Temperance movement in Miss Gillyflower’s hellfire speeches about moral turpitude and sin. There’s an almost Nazi like allusion in the recruitment of only beautiful people. He also seems to have been inspired by those places where the employers would build houses for their workers which while seeming charitable also has an air of menace about it. So it fits that he extrapolates this into a factory that instead of employing people dips them in a vat of crimson gunk. Course, they didn’t have unions in 1893.

There are two particularly delightful aspects to the episode. One is the flashback sequence that tells us how the Doctor ended up in a pickle which is presented as if on old film stock compete with jerky movements and scratches. This is the sort of thing directors should be allowed to do more often as it gives episodes individuality and character. Other shows play with this sort of thing more than Doctor Who, such as Crime and Retribution’s split screen work, and it is often to their credit. It’s the sort of thing you remember if it fits the episode- for example `The Eleventh Hour` using multi perspective to re-play the village green scene.

The second aspect is how the macabre mingles with the comic so easily. We’re often a whisper away from the League of Gentlemen yet Gatiss balances matters perfectly and the cast play to the just the right level. Diana Rigg is superb channelling Miss Gillyflower’s puritan ethic with gusto relishing every line. Like the best Who villains she’s not without a mischievous devilry that makes her seem very dangerous indeed. Diana Rigg’s real life daughter Rachael Stirling has the sort of story line I thought the current series too often forgets about as Ada goes through a gamut of emotions with her “monster”. It’s a clever idea too that in her blindness she refers to the Doctor that way yet her mother has a real monster underneath the crinoline.

After initially being wary of the involvement of the London trio of Vastra, Jenny and Strax’s involvement simply because they crowded out the action of `The Snowmen`, I was pleasantly delighted as to how well they fitted in here. A spin off series would be pushing it but if they are woven into stories as effectively as this then they’re more than welcome to pop back now and again. Plus Dan Starkey’s comic timing and ability to pull faces under his prosthetics is superb.

Throughout Gatiss’s writing and Saul Metzstein’s exemplary direction impress; I still can’t get over the fact that the director of one of my favourite films Late Night Shopping is doing little old Doctor Who. They propel us quickly but not too quickly through a lot of material; I think there is probably more plot in this episode than any other this season yet it never seems hurried or impenetrable. No doubt someone will contradict me but as far as I can tell the narrative makes sense. Almost a bonus are some little oddities like the boy who seems to possess an uncannily modern sense of direction, that marvellous imagery of people in their front rooms underneath a huge glass case like antiques and what exactly the factory is pretending to produce but it simply makes the episode even more fascinating. Perhaps it should be called `The Crimson Triumph`!