Cockneys vs Zombies: A Good Match? 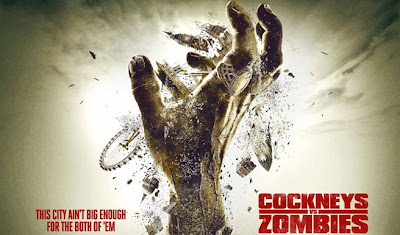 Cockneys vs Zombies. Wonder what that film is about then?
We’re going head to head
With the undead,
You can fill ‘em full of lead,
But they won’t stay dead.
Sometimes simple ideas are the best. With a title like Cockneys vs Zombies you know exactly what you’re going to get. It was a working title as it goes but everyone liked it so much and it seemed to sum up the film better than any other one they could think of. From an original idea by London based director Matthias Hoene the script is penned by James Moran and Lucas Roche who turn a simple idea into something that is vibrant, funny and entertaining. A zomedy if you will. Gawd bless ‘em as a Cockney might put it.

Email ThisBlogThis!Share to TwitterShare to FacebookShare to Pinterest
Labels: Cockneys vs Zombies, Film