In the television schedules, there are some timeslots that are synonymous with certain kinds of programming. Channel controllers may ramble on and on about how this isn't the case and their output is diverse and varied blah blah blah etc, but there is no escaping the fact that, by and large, they tend to put the same genres in the same timeslots. If it's on between eight o'clock and nine o'clock at night and lasts for either fifty minutes or an hour, chances are it will be a detective series aimed squarely at a mainstream audience. Similarly, if it is supposed to be shown in a ridiculously unsuitable early evening or late night timeslot but instead ends up being shunted wildly around the schedules to make way for Championship Snooker or Crown Green Rowing, then chances are that it is a popular telefantasy series with a loyal and sizeable audience (who, so the schedulers would appear to believe, are available to watch television at any given hour of the day on the off-chance that their favoured programme might actually end up being shown at some point). Sadly, while science fiction, fantasy and mainstream audiences were once virtually inseparable in the world of television, they are now kept segregated as widely apart as possible, and on current evidence it would seem that most people in the industry wouldn't even have nightmares about combining them. Yet not so long ago, the BBC did attempt to combine them. Back in 1992, with a suitable flourish of publicity, they launched an impressive and highly enjoyable series named "Virtual Murder", which on face value seemed likely to win over mainstream and cult audiences alike. So, in that case, how come it still isn't pulling in huge viewing figures to this day? Well, in all honesty, that's almost as puzzling a mystery as the ones that were investigated in the series itself.
Virtual Murder was described in the typically point-missing BBC publicity that accompanied its arrival as being "an Avengers for the 1990s", and many critics and viewers alike made the mistake of thinking that statement meant that the series would be a direct updated equivalent of the classic tongue-in-cheek 1960s adventures of those 'quintessentially English' crime fighters John Steed and Emma Peel. This serves as a perfect example of why previews and press releases should never be used to judge the nature of a television series, as not only would updating The Avengers have been a futile and pointless exercise (as indeed was proved by a certain feature film about five years later), there was actually no way in which such a motive could ever have been ascribed to Virtual Murder" What the badly-worded and ambiguous statement was probably actually supposed to convey was the fact that Virtual Murder represented to the genre of 'hard hitting' 1990s television crime drama what The Avengers had been for its 1960s counterpart. While Virtual Murder shared the same techniques of using off-the-wall, larger than life villains and outlandish, exaggerated plots that had made The Avengers so enduring enjoyable, in terms of the actual mechanics of the series it concerned itself very much with present-day methods of crime-fighting, including forensic science and psychological profiling.
The central character was Doctor John 'JC' Cornelius (Nicholas Clay), a renowned expert and lecturer in Psychology at Birmingham University, who (aided by his lab partner Sam Valentine, played by Kim Thomson), used his vast knowledge of the subject to assist the police in their efforts to track down the more unusual criminals that crossed their path. On face value, this might sound like a perfectly straightforward and conventional premise for a crime drama series, but that was where any similarity with the likes of Cracker started and ended. Created by Harry Robertson and Brian Degas (who had previously been responsible for Specials, a short-lived series about the Special Police Force), Virtual Murder purposefully indulged in wilfully exaggerated and whimsical plots, of the sort that simply would have not have been tolerated in a more straightforward detective series. While this concept might give headaches to today's breed of 'focus group'-orientated programme controllers, who would no doubt end up spending many sleepless nights worrying about the format's 'low demographic stratagem audience share value' or something, there is no question that it made for exciting, distinctive and highly individual viewing.
The curious approach of the series was demonstrated in no uncertain terms by the opening episode, 'Meltdown To Murder' – which, in a move that suggests that someone somewhere was determined to make the idea work, was written by the brilliant Phillip Martin, who had masterminded the equally bizarre late 1970s BBC crime drama Gangsters. The episode (in which Martin, in common with all of his television scripts, took a small but significant acting role) saw Cornelius called in to investigate a spate of incidents in which valuable paintings had simply started melting for no readily obvious reason. The ensuing plot was suitably intricate and complex, revealing the man responsible to be Jed Frewin, a master of disguise and an old adversary of Cornelius, and sure enough the plot involved an hilarious 'flashback' sequence showing the two men in the 1970s, during which Cornelius was sighted in typically "Open University"-style getup! Incidentally, Frewin was played by E!nn Reitel, who was just one of an impressive array of guest stars who enlivened the episodes with impressive performances, including Hywel Bennet, Tony Robinson, and - making a very unlikely appearance as an undertaker - Julian Clary. 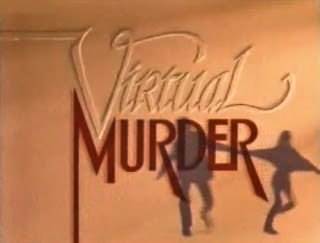 ﻿
As the series progressed, the storylines and characters grew ever more peculiar, and even the more 'conventional' episodes, for example 'Last Train To Hell And Back', were littered with completely bizarre and outlandish scenes and premises, from abstract deliberate clues left at crime scenes that were so vague as to potentially not actually be clues at all, to Cornelius sending a fax of his tie by accident. In what was possibly both the most memorable and the most baffling moment of the entire series, 'A Torch For Silverado' featured Jon Pertwee as a pensioner who had made it his mission in life to blow up brothels and sex shops (which was certainly one of the most enduringly disturbing images depicted on television in the 1990s). In many respects, 'A Torch For Silverado' serves as a perfect example of how the series worked. The plot was bizarre and outlandish enough to satisfy fans of the genre, yet it was also true that the techniques used to track down Silverado and his intended targets would have fitted perfectly comfortably into any more 'traditional' detective drama - and on top of all that, it was a genuinely tense and nail biting storyline peppered with plenty of humorous moments. Virtual Murder had huge crossover appeal, with the potential to win over disparate audiences, and it's unfortunate that ultimately it didn't really fulfil that potential.
Virtual Murder revelled in blurring the distinction between fantasy and reality, and fittingly, the conclusion to each episode was left deliberately vague with regard to the question of whether there might actually have been a rational explanation for the weird goings-on or not. For example, the ending of 'A Dream Of Dracula' was deliberately ambiguous, and left the viewer as uncertain as the investigative team as to whether the suspect they had devoted the episode to tracking down actually was a genuine vampire or not. What made this particularly enjoyable was the way that, unlike many of the similarly inclined series to have appeared on television over the years, Virtual Murder did not make any heavy-handed attempts to stress that 'this was something that could have happened in real life', and instead conveyed a gloriously ambiguous sense that even the participants in the storyline were in fact unsure as to whether the events had actually taken place or not. Incidentally, Nicholas Clay claimed during promotional interviews for the series that each of the cases featured in the episodes was in fact based on a corresponding real-life incident. Ahem.
Unusually, Virtual Murder was not produced by the BBC's main drama department but instead was made by the Birmingham-based regional station BBC Pebble Mill (perhaps providing an indication of the differences in mindset of what made for 'good' programming that existed at the time), and was broadcast on the main BBC1 network between 24 July and 28 August 1992. The series enjoyed the same sort of prime-time weeknight slot that had been routinely afforded to similarly quirky crime dramas (notably including The Avengers and Randall And Hopkirk (Deceased)) in the 1960s and early 1970s, but which had eluded the fantasy and science fiction genres for many years by that point. Virtual Murder was actually, in retrospect, part of a wave of similarly-inclined programmes that blended crime-fighting, fantasy and science fiction, and humour, which also included the likes of Moon And Son and Bugs, that were also launched in similarly high-profile slots.
Regrettably, it was to be the exact same straddling of audiences that had made the programmes to distinctive and in many cases exciting that was also to prove to be their downfall. Such series are notorious for taking a while - often as much as an entire two series - to properly catch on with a mainstream audience, and so Virtual Murder, like all of the others, was dependent on the more immediate reaction of genre fans to be adjudged a success. Unfortunately, the inexplicable reaction of the majority of mouthier genre fans appeared to be to ignore such programmes completely, or worse still sneer and be openly negative about them, and then wait until they had all started fawning over The X-Files to start complaining about the BBC's haphazard scheduling of genre shows and asking in baffled tones why the corporation never made any equivalent programmes of its own. Even if they hadn't considered many of the offerings to be exactly classics of the genre, then at least they could have supported the intention behind the initiative, instead of just being pointlessly destructive and then wondering why they were being treated as an insignificant sector of the audience some time later. It's easy to start going on about how great it would be to see this sort of stuff in high-profile timeslots, but the fact remains that it was great to see Virtual Murder in a high-profile timeslot, and it remains a shame that so many fans of the genre either seemed to miss the point of the show, or to miss out on it completely.
Words: Tim Worthington
﻿
Posted by John Connors at 18:54