Although published in 1949, George R Stewart’s sprawling epic Earth Abides was neither the first, nor the last fiction to delete homo sapiens from the world. For Stewart, it is a virus that wipes out the human race. But mass-extinction had been a popular theme for writers at least since Mary Shelley’s The Last Man in 1826, in which a viral-plague devastates civilisation, followed by the awful anguish of Matthew Phipps (MP) Shiel’s sole inheritor of a world depopulated by The Purple Cloud (1901). After Stewart’s novel the Cold War thermonuclear confrontation gave atomic catastrophe the added frisson of terrible political relevance, with world-ending cataclysm brought about by a regular arsenal of frightful doomsday weapons. In fact, Stewart alludes to global war as his character – Isherwood Williams, muses on the irony that ‘the trouble you’re expecting never happens’. People have ‘been trembling about destruction through war’, and ‘having bad dreams of cities blown to pieces’, but that ‘it’s always something that sneaks up the other way’. It’s an idea that’s been picked up and re-envisioned numerous times since in various inventive ways, with humanity variously drowned, grilled, frozen, irradiated, crystallised, burned and eaten by perambulating plants. Stephen King acknowledging the influence of Earth Abides on his The Stand (1978, revised 1990), with echoes up to Will Smith’s cinematic last man in New York in Richard Matheson’s I Am Legen’ (2007), or the ongoing Twenty-Eight Days Later movie series (2002 & 2007). 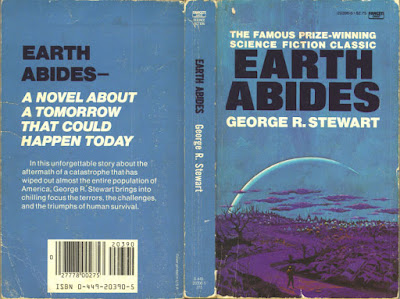 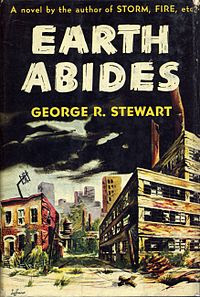 ﻿
Stewart combines eco-disaster with a retro-affection for the cosy small-scale rural communities that emerge from the wreckage. Neatly, without any contrivance, one becomes two. Ish notices chimney-smoke. Follows it. Finds Emily. They become Ish & Em. The fact she has some black genealogy is suddenly an irrelevance. Soon, two become three. There are inter-chapter ‘Quick Years’ as time accelerates. They become a tribe with the addition of Ezra & his wives, children and grandchildren. From near-misanthropic loner, by year twenty-two this unlikely architect of a new world has matured into the community leader with the hammer, the mystic symbol of his authority. He’s an essentially decent, well-intentioned, moral man. He worries for his community in ways that raise anthropological questions about the nature of humanity, the place of superstition and religion, tradition and innovation, the limits of culture, abstraction versus practical skills, language and literacy. How much of civilised behaviour is habit, a convention, a consensus? Without its restraining influence, what is left? What makes society change? He’d assumed that, after a chaotic interregnum, some semblance of the old life would resume, albeit in small-scale. Electrical power would be restored. Yet they’re still scavenging from the relics of the old world. With food-supplies easy to obtain, there’s no stimulus to change. Or – as with the Plains Indians, once their traditional way of life was rudely shattered, they’d lost the will to innovate. The new children are barely literate. Once reading-skills are lost, they’ll be incapable of consulting the libraries to find the technical information they need. None of the other adults seem to share his concerns. They shrug and live day-to-day, drifting with no thought for ten, twenty, or thirty years into an uncertain future. But Em’s common-sense responses balance out Ish’s sometimes elitist criticism of the others. Until the water-supply cracks up and fails. Until autos no longer run, and there are no horses and no-one experienced at taming them anyway – they are stranded city-dwellers after all. Life takes another step backwards
Two deaths stand out above the mass-extinction – Charlie, the drifter who bloods the new society and causes it to lose its innocence, and Joey, the smart son in whose intelligence Ish invests so many hopes for a better future. Decades after Ish’s cross-continent expedition, youngsters Bob & Dick attempt to replicate his journey to re-explore the new American frontier. The pioneers return with tales of a Pueblo community in Albuquerque, of an empty Chicago ghost-town, and LA given over to a hostile white-robed ‘People of God’ cult. But they also return with Charlie, who brings the leadership issue of the group to a head by focusing his sinister designs on mentally-challenged Evie, traumatised by her experiences during the Great Disaster, and cared for by the community. According to his address to the ‘Twenty-Third World SF Convention’ in London, 1965, John Brunner once persuaded CS Lewis to read Earth Abides, purely for the passage framing Ish’s moral dilemma about how to deal with Charlie (in ‘New Worlds No.162’, May 1966). As it is, they vote, Ish, dull carpenter George, and easy-going Ezra. Then they act together to execute Charlie. But something of his legacy exacts its toll. He also brought disease with him. Typhus takes five, including Joey. Ish must reconfigure his plans.
There’s been ‘a wiping-out of it all’. Will civilisation return? Can the end also offer the opportunity of ‘a new start’, of building a better world from the ruins? With Joey gone, with the loss of literacy, it’s by no means certain. People are no longer the crown of creation. They live as part of a pastoral world, not as its dominating power. Ish lowers his ambition. More modestly, he teaches his great-grandchildren the practical skills of archery. Once the scavenged ammunition fails they’ll still be able to hunt. As the collapse continues. Fire devours even San Lupo Drive. His wife and friends are gone. He’s the ‘Last American’, part oracle, sometime encumbrance. Again there’s the sense the viral-apocalypse was part of the Earth renewing itself. Certainly for Ish the course of his life has been radically altered, for the better. It’s difficult to imagine him reaching such assured dignity in the old life. The novel follows him through to his fading death as an oldster. Until he passes his hammer, the symbol of his authority, on to the new generation. The tribe are shaping their own lives into a future as yet undetermined. To which he is reconciled, and not displeased. For ‘men go and come, but Earth abides’.
The Tribe has become a hunter-gatherer reversion, adopting a Native American life-style. It’s easy to envisage over the coming years, as old houses become increasingly unsafe that they’ll move into make-shift shanty tepees of plundered materials such as corrugated panelling. Before moving to follow the migration of prey, or fresh water. But also that sooner or later there will be contact with other tribes. The African-American tribe for example. There’s also a likelihood that somewhere in the world beyond, in Europe or Africa, China or South America, a culture will have survived by doing what Ish failed to do, by passing on literacy and numeracy skills that will be rewarded by a more advanced culture. And that sooner or later the descendants of Ish’s tribe will be faced by a new Columbus, or new Conquistadors. But that remains for the unknown future. In the meantime, they abide. 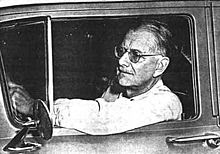 I was eighteen when I first read Earth Abides, from a battered Ace Star paperback edition picked up cheap from the second-hand bookshop on Hull’s Prince’s Avenue. The effect was considerable. In fact it hit with the force of a large meteorite. Re-reading that same carefully-stored copy now the effect remains as powerful. George Rippey Stewart (31 May 1895 to 22 August 1980) was a distinguished historian as well as novelist, although only an accidental SF writer, with little connection to the genre. As Lee Harding, contributing a thoughtful ‘Guest Editorial’ to ‘New Worlds no.130’ (May 1963) points out, ‘Stewart was a writer first and a science fiction writer purely by chance’. Stewart earned his MA from Berkeley in 1920 for his study of Robert Luis Stevenson, only to return later to the same university as its English Professor. His factual book Names On The Land (1945), an academic account of place-naming in the United States, is enlivened by accounts of traveller’s tales formally circulated about the New World. He also wrote Ordeal By Hunge’ (revised 1960, adorned by maps) – the historical narrative of the doomed Donner-Reed Party pioneers who revert to cannibalism when stranded in frontier America. In the field of novels he wrote Fire – of people battling the forest-fire fury of nature, and ‘Storm’ about a Pacific cyclone. As with the Broadway song it inspired, ‘a wind called Maria’, the ‘protagonist’ of both novels is the title-event. But to John Brunner, ‘it’s no coincidence that having tackled themes of this nature Stewart walked fully equipped into the SF field and carried off the International Fantasy award’. For although Earth Abides’ is his only real work of SF it is ‘one of the finest of all disaster novels’ according to critic Malcolm J Edwards, and ‘generally acknowledged to be a classic of the genre’ (in The Encyclopedia Of Science Fiction, edit Peter Nicholls). Lee Harding adds that Earth Abides ‘will remain a true classic for some years to come, when all the synthetic media by Pohl, del Rey, Anderson and others of that ilk, will be forgotten’. Maybe he’s wrong about the ‘others of that ilk’, but he’s absolutely correct on Stewart. He provides a model that modernised the theme of the ‘cleansing plague’ that deletes homo sapiens from the world, in ways readily assimilated by later writers.
At the brink of the 1950’s Stewart’s parallel-history protagonists know nothing of the Moon-landing, the collapse of Communism, the Beatles, Vietnam, Global Warming or iPods, but their human concerns are clear and achingly empathic. Earth Abides takes a single idea, and plots its consequences in a fast-moving involving and deeply-affecting prose-style, that has lost nothing of its epic power across the intervening years. Six decades after the novel’s publication, with the global population bursting through the seven-billion mark, we’re still here. Still hanging in. Although devastating, and with no disrespect to the pain and bereavement of victims, many lethal pandemics have failed to halt, or even slow, the population expansion. But historically, biohazards on a vast scale have happened. It took the Black Death five years to insidiously crawl across fourteenth-century Europe and reduce the population to a third of its previous numbers. It would now take a matter of hours to encircle the world. Just as in Contagion (2011), Gwyneth Paltrow is the unwitting carrier of a virus, spreading it back from Hong Kong to the USA, where even a supporting cast of Matt Damon, Jude Law and Kate Winslet struggle to contain its devastating effects. ‘Earth Abides’ was not intended as a warning. But be warned by it nevertheless. The ‘Great Disaster’ George R Stewart conjectured in 1949 has been deferred. While its symptoms in every way multiply. We are living on borrowed time….
Posted by John Connors at 19:21