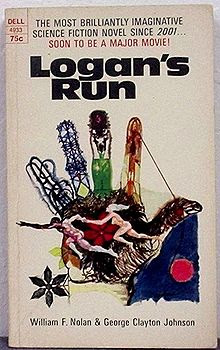 ﻿
It’s the year 2116, or ‘the Year Of The City 2274’ in the movie, and everyone carries a flower-crystal embedded in the palm of their right hand. In the movie the palmflower becomes the life-clock. It turns a different colour for every seven years of your life. When the jewel starts blinking red it denotes countdown. Then it turns ‘sleep black, death black’, and it’s your Lastday. Your ‘death-day’. In the book there are euthanasia centres called ‘Sleepshops’. In the movie people believe they are ‘renewed on Carousel’, a quasi-religious hokum in which white-masked candidates levitate in non-grav simulation as they circle above a revolving red illuminated ‘flower’, which zaps them in mid-air. ‘One for one, one is terminated, one is born’. Balance. ‘Good citizens make a stable world’ says the book. To enforce the system there are DS-men, Deep Sleep Operatives, abbreviated onscreen to just ‘Sandmen’. Michael York is ‘Logan-Five’, a Sandman.
As with Ray Bradbury’s ‘Fireman’ of ‘Fahrenheit 451’ they are the dutiful hit-men of conformity. He carries a pearl-handled gun with four settings – Needler, Vapour, Tangler and Homer, all designed to restrain and terminate Runners, those who attempt to escape their fate. Logan is also skilled in a form of martial art called Omnite. The Sandmen treat pursuit like a game, a kind of blood-sport. Logan argues that he’s never ‘killed anyone’, just ‘terminated Runners’. He commends his most recent posthumous victim as being a worthy prey, with a flippant ‘he was good, wasn’t he?’ In the meantime the people of the dome enjoy hedonistic lives ‘pairing-up’ in the orgy-room or – as in the book, high on Lysergic Foam, ‘an extension of the old LSD formula’. Logan’s sense of duty only wavers when his own time lapses…
In those pre-CGI days it was easy, and profitable to contrive a UFO-monster to menace canoodling teens in Daddy’s car parked on Lookout Hill. It was genuinely more ambitious to attempt a completely new visually-different self-contained future environment. If the sets and styles of ‘Logan’s Run’ sometimes resemble ‘Thunderbirds’ animations populated by free-love ‘Space 1999’ fashions and colours, with lavishly coiffured hair, that’s the inevitable results of its production time. ‘The Ultimate Encyclopedia Of Science Fiction’ (edited by David Pringle, 1996) is scathingly critical, branding it the ‘thematic successor to ‘THX 1138’ (Zeotrope, 1970), but not as good’. The other film referred to is an early George Lucas effort set in contained subterranean chambers where a man, prosecuted for falling in love, tries to break out into the world he suspects must exist beyond. Yes, it’s a fine film. But fictionally, the idea of the enclosed community, a refuge from nuclear war, was a common theme in Cold War SF, and even before. For that self-sustaining sealed world to forget about the planet beyond, until one or two heroic misfits break the rules and penetrate the mysteries of ‘outside’ is a fairly typical development. Daniel F Galouye’s ‘Dark Universe’ (1961) did it, with Jared fumbling up out of a blind sub-world towards the light. There was ‘Downunder’ in Harlan Ellison’s “A Boy And His Dog”, an enclosed refuge from the radioactive hostile post-nuclear surface.
More recently there was Suzanne Martel’s more juvenile take on the theme with ‘City Underground’ (1975) and Vanda Mcintyre’s more florid quest to ‘Center’ in ‘Dreamsnake’ (1978). And despite its admitted flaws, ‘Logan’s Run’ is a genuine attempt to film one of those many post-apocalypse tales from those pulp magazines and early SF novels. Written by William F Nolan with George Clayton Johnson, the original ‘Logan’s Run’ novel arrived in the UK through Gollancz in 1969, followed a year later by the Corgi paperback edition. 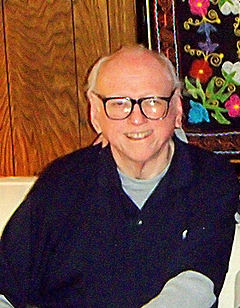 Born in 1928 Nolan was a prolific writer across a wide subject-range – including thrillers, biographies and books on auto-racing, but his loyalty to SF went back to his fan-years founding the ‘San Diego Science Fantasy Society’ editing its fanzine (‘The Rhodomagnetic Digest’) and publishing ‘The Ray Bradbury Review’. He was twenty-six when he made his first professional SF-story sale, to ‘If’ magazine with “The Joy Of Living”, and went on to managing-edit the three launch issues of ‘Gamma’ magazine in 1963, before the publication of his own debut book, a short-story collection called ‘Impact 20’ (1963). But it was ‘Logan’s Run’ – first published in the USA in 1967, that made his name. It is not sophisticated literature. No stylist he. Yet it is wham-bam fast gimmicky action, a pell-mell of spiky-slick prose throwing its protagonists comic-book-style from hazard to hazard. Few single plot-elements are especially original in themselves, it’s the way they’re mixed and matched that gives them pace. Each section is formulaic, but with an accumulative short-attention-span acceleration that never tarries long enough to bore, fuelled with invented Nadsat wordgames such as ‘lungblasters, glassmasters and live-fasters’.
For the future-Earth Nolan has envisioned ‘man reached for the planets and found them puddled gas and frozen stone. He reached for the stars and was driven back by E=M2’. So, although they’re confined to the Earth, each chapter casts his characters into new cartoon-frames of extreme cliff-hanger hazard and ludicrous punishment, spiced with a little gratuitous titillation. It could be argued his approach is ahead-of-the-game, where other writers were still constructing dire warnings of nuclear threat, he was already anticipating the more playful ‘Mad Max’ and ‘Judge Dredd’ approach, in which the post-apocalypse world becomes a monstrous new-wilderness theme-park of thrills.
Part 2 shortly...
Posted by John Connors at 19:45