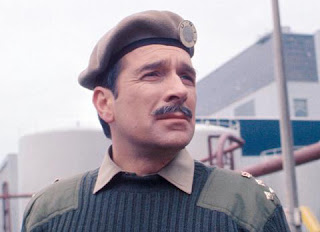 Some actors have such an affinity for a role that it obscures most of the other work they do in their career, however good. Nicholas Courtney will forever be associated with Brigadier Alistair Gordon Lethbridge –Stewart who helped save the world many times during the Doctor Who of the 1970s and 80s. Such a fondly remembered character may well be the result of a combination of creative circumstances but it was the casting of Courtney that made it comes to life (“No, no it wasn’t” you can imagine him barking!). The Brigadier needed to be the rod of sanity amidst globby orange aliens and gargoyles coming to life; his unflappable responses to these situations added something special to this period of the series. “Chap with wings, five rounds rapid!” and “I’m fairly sure it’s Cromer” are great lines but it’s the way Courtney delivers them that makes him a human character in what is an otherwise exaggerated reality.
As a soldier he had to launch into battle with an army of six, but Courtney made you believe the Brig believed they could win. Other cast members have attested to his generosity on set and this shows in many scenes where he’ll play the foil or react with raised eyebrows or, memorably, at the end of `The Deamons` go for a pint!  If UNIT was a `family` he was the strict but fair father, the paternal guide always ready to lead from the front. Occasionally the actor got to show more of his undoubted range, such as having a dual role in` Inferno` as the quite mad eye patch wearing Brigade Leader or the slightly haunted but soldiering on older Brigadier of `Mawdryn Undead`. Standing up to the Destroyer in `Battlefield` with no backup he declared, “I just do the best I can”.  The Brig’s presence inspired some of the more moralistic arguments in the 70s version of the show with the character sometimes acting unilaterally against the wishes of the Doctor for what he saw as the protection of the public. These exchanges with Jon Pertwee became a highlight of many an episode.
Of course Courtney’s career was long and varied with appearances in series such as The Avengers, Randall & Hopkirk (Deceased), The Champions, Yes, Prime Minister, Only Fools and Horses, Then Churchill Said to Me and Fresh Fields. He also toured as the Narrator in a version of Rocky Horror Picture Show in the 1980s, enthusiastically endorsed Morning Fresh and narrated other adverts as well as lending his voice to audio work. He also played a leading role in Equity, the actor’s union. The Brig was of course his second Doctor Who role following his appearance in the 1960s as Bret Vyon.
Nicholas Courtney the man was a more nuanced character than the people he played. He was always ready to sit and chat to fans at and events and his on stage interviews were always interesting even if he resorted to his keynote anecdote about the Inferno eye patch. I remember being lucky enough to have a chat with him at a convention in 1997, mostly about politics and unions and just as he would anyone, he treated me as if we’d known each other for years. He was so well thought of by fans that in 1997 Doctor Who Appreciation Society made him their honoury president. Whatever the troubles of his private life, he maintained a very traditionally English exterior of modesty and pragmatism. In an ever changing world, he was one of the last of the true gentlemen.
Tributes at www.greyhoundleader.com
Posted by John Connors at 19:55