Reviewed by Chris Arnsby. Richard Skinner: "We are live tonight from Television Centre. In the studio Eugene Wilde, Billy Ocean, stars all of them."Simon Bates: "And we also have a new number one tonight. [looks at watch] It's exactly what? Twenty minutes past seven tonight. Here's never ending song Limahl. The lady with Limahl over here happens to be called Mandy and she's a Spurs supporter. She sings quite well though."
[10] Limahl: Never Ending Story. The effort of speaking and checking the time appears to make Simon Bates throw a cog in his brain. Richard Skinner throws several knowing looks to camera as Bates rambles through what can only be described as a never ending intro.
Meanwhile, Wikipedia credits Beth Anderson and not Mandy as the female vocalist on this song. Why would Simon Bates lie about that?
Regardless of who is, or isn't singing, Limahl and [finger quotes gesture] Mandy have been placed on a circular rostrum with alternating black and white stripes around the edge. It looks like a garden trampoline and I keep expecting Mandy and Limahl to start bouncing and doing pikes and tuck jumps. Obviously this doesn't happen.
During the musical break the pair start slow dancing in a way that gets whoops of approval from the audience, but possibly not from Producer Stanley Appel in the studio gallery.
Finally, although I bear no personal ill will to Limahl I hope he doesn't appear on Top of the Pops again. I find his name very fiddly and irritating to type. Although it's not as bad as Kajagoogoo. 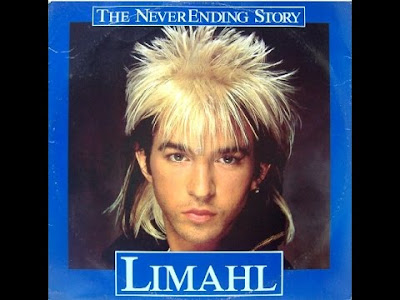 [7] Status Quo: The Wanderer. On film. The band climb on the back of a lorry parked on the south bank of the Thames, where City Hall is now, and travel north across Tower Bridge and through the streets of grotty 1984 London. Tower 42 is briefly seen in the background then Status Quo are suddenly delighting children and the gentlemen of the press in Lupus Street (Pimlico) before going on the move again with 60 Victoria Embankment in the background. Honestly, it's as if editing together a sensible travelogue was the last thing on anyone's mind. Royal Street, Lambeth comes next and then the band are heading north on Portobello Road. And then mercifully night suddenly falls.
[29] Depeche Mode: Blasphemous Rumours. Literal Musique concrète from Depeche Mode. The verses sound like the contents of a cutlery draw being tipped down stairs and the audience don't like them as much as the more cheerful upbeat chorus.
[8] Alison Moyet: All Cried Out. Alison Moyet wanders round the bits of London Status Quo didn't visit (mainly Primrose Hill), on video.
[21] Billy Ocean: Caribbean Queen. Billy Ocean sings about how much he loves his Caribbean Queen, which sounds more like an ocean liner than a person.All solo singers face the same problem, what do you do when you're alone on stage and not singing? Billy Ocean acquits himself well, except for the moment when he decides to chicken walk across the stage. 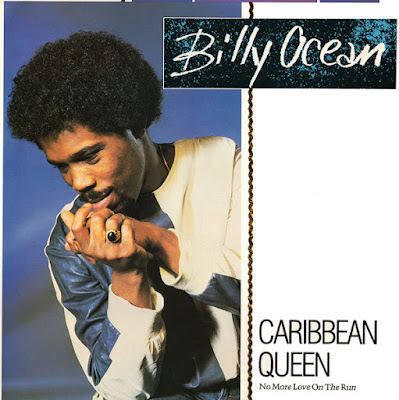 [21] Chicago: Hard Habit To Break. Wimp rock. On video.
[32] Gary Numan: Berserker. Oh no, Gary Numan's gone berserk. He's painted his face white and dyed his hair blue. He's out of control.
[22] Eugene Wilde: Gotta Get You Home Tonight. Top of the Pops has placed Eugene Wilde on the same stage used by Billy Ocean so that we can compare and contrast the pair. Actually Eugene doesn't do too badly in the dance stakes but his song is a long way behind Billy Ocean's billet-doux to a 40,000 ton liner.Richard Skinner tells us that Eugene Wilde wrote this song in a "lonely London hotel." Eugene may have been alone but he had a rhyming dictionary for company; tonight... tight... night... erm.... light...  bright... trite. 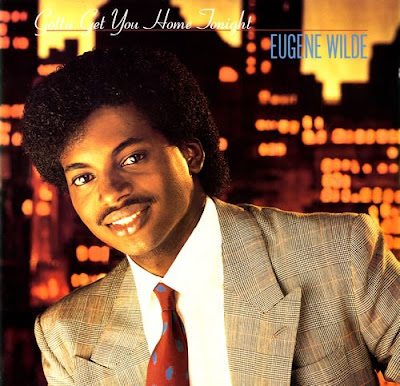 [1] Chaka Khan: I Feel For You. On video.
[11] ZZ Top: Gimme All Your Lovin'. Audience dancing and credits.
Performance of the week:  Billy Ocean: Caribbean Queen.