After the bustle of the opening episode, the second is predominantly set in Mrs Coulter’s well- appointed London apartments which Lyra soon finds to be a gilded cage. The nature of her character is being trusting and adventurous so the promise that Mrs Coulter will help find her missing friend Roger was enough for Lyra to believe in. Thus the scene is set for a tense episode in which Lyra soon becomes suspicious that Mrs C is far from the helpful patron she seems. With rules aplenty, a locked lift and plenty of locked doors something is up. The episode is a showcase for both Dafne Keen and Ruth Wilson whose performances are nuanced and interesting with each turn of the plot. 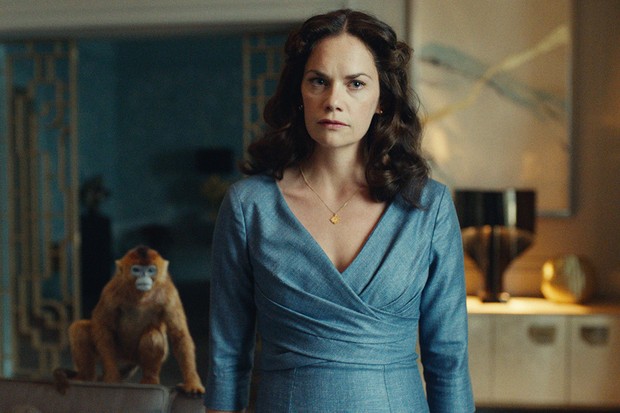 Lyra’s playful childishness is still evident, a refreshing change from other dramas where kids are portrayed as mini adults. Dafne Keen pitches this exactly right, even when Lyra has been shocked by discoveries she retains her sense of adventure as her ultimate rooftop escape at the end shows.
Ruth Wilson is likely to be remembered as one of 2019’s scariest tv characters with a casual nastiness that’s tempered for the viewer by several scenes in which Mrs Coulter seems regretful or even shocked by her own acts. There’s also a chilling balcony scene where she mentions her dislike of heights due to the fact that she might jump hinting at a lot of hurt in her background. Watching the two characters trying to co-exist while each covertly working against the other is fascinating giving the episode the heft of one of those tv thrillers.
There’s a strong sense of jeopardy conjured up especially during a sequence when Lyra and Pan sneak into Mrs Coulter’s office to discover some blueprints and then have to rush back as the lift returns. The fact that Mrs C has been visiting the stolen kids therefore showing us she is most definitely involved adds even more tension to the scenario. I suppose Lyra has been kidnapped as well just her containment is more luxurious.
Each time the episode leaves Mrs Coulter’s apartment it is to tease us with wider developments but just as in the novels each one brings more questions. In a sense the plot is simple- girl searching for her lost best friend- but there are so many interesting strands surrounding it. It is interesting that outside of the episode’s two main characters almost all the others are male especially those from the ruling Magisterium which is clearly the Church something that the film adaptation of the novel a while back seemed to miss out on. This episode shows us a little of their shifty behaviour and determination to ensure information is supressed when necessary. The lengths they will go to becomes personified by Carlo Boreal superbly played by Ariyon Bakare and proving to be just as chilling as Mrs Coulter. 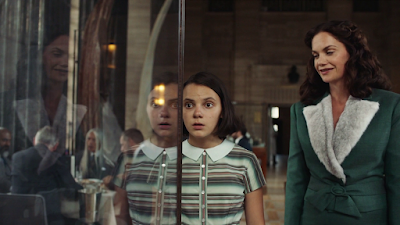 The link between human and daemon is more explicitly revealed than in part one which might have left some viewers seeing the animals as talking pets. In a shocking scene Mrs Coulter’s evil looking monkey almost crushes Pan which also harms Lyra and to emphasise the point a later scene has the enigmatic Boreal crushes a butterfly deamon killing the person its attached to. At the same time, Mrs Coulter’s monkey seems able to act far more independently than others can. It’s worth mentioning that the CGI for the daemons is superb and totally convincing to the point where you start to imagine training schools for monkeys, foxes and stoats somewhere!
One of the things about a tv or film adaptation of a novel is to expect changes as it’s a different medium and there are aspects of either format that don’t necessarily work in the other. So those in the know will be surprised by a couple of key reveals this week, one involving the absent Asriel and the other sees Boreal step through an apparent `gap` in the air and turn up in contemporary Oxford. We’re already so used to the airship filled slightly steampunk England we’ve thus far seen that this is quite a visual jolt. Both these things happen in the second novel so clearly Jack Thorne has good reasons to bring them forward and it works rather well here. Hopefully this won’t short change episodes in the second series.
For such a static episode this is packed full of edge of the seat stuff and some important developments. It’s a shame that the overnight ratings saw about 3 million lopped off the first week but those who stayed with it were well rewarded.
Posted by John Connors at 22:40