How to demolish a flyover!


Flyovers are not for life- just about fifty years and the time soon comes round for them to either be repaired or demolished. In Liverpool we have a large flyover called Churchill Way that takes traffic into the centre of the business district avoiding many more congested roads but half a century after it was built it is coming down. The 240 metre long stretch of flyover was opened in 1970 supposedly as part of a larger city ring road project that was never finished. Last year inspections revealed issues involving drainage, barriers, internal support and bearings and the edifice was closed for further examination. So it had to come down! 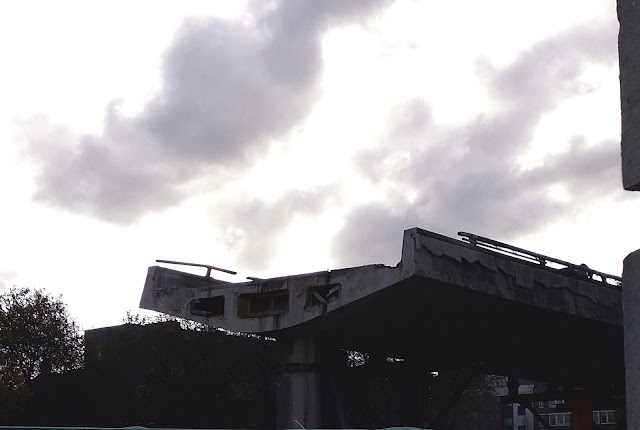 A subsequent detailed examination cited factors such as “poor quality of original construction, subsequent deterioration and the current signs of structural distress” to support demolition. The investigation found corroded tendons and ducts as well as signs of structural distress including cracking over some supports. Currently being carried out by contractors Amey and Graham at an estimated cost of £6.75m the work is considerably less expensive that the £50m to £60m it would take to repair them and even if they did the structures would only last another twenty years.


So how do you demolish a flyover when clearly hitting it with a large concrete block is not really an option however spectacular that may be. For a start the edifice is surrounded by buildings, some inhabited, others of great historical or artistic importance. So what they’re doing is taking the flyover down in 25 metre long sections which are being cut with a pair of giant scissors a specialist machine. Once separated these slabs are lowered to the ground before being cut into smaller sections and then taken elsewhere. Eventually they’ll be crushed for use as filler in a separate project.
Watch this video of how you cut a big lump of concrete!


Several years ago, when rumours that Churchill Way might need to be demolished sooner rather than later emerged, a group called Friends of the Flyover was established. Their proposal was turn the whole thing into a pedestrianised garden walkway with space for cycles but like a similar bridge scheme in London this never happened. Imagine all the weeding that would have been needed! It goes to show that whatever you do evokes some protest as the thing wasn’t universally welcomed when it was constructed.


Rather strangely there seems no firm ideas as to what will happen when the flyover is gone. Obviously some roads will be reconnected up but as the area includes some pedestrianised roads and also the entrance to one of the Mersey Tunnels options are limited.


At the moment thoough, mid process there is something odd seeing sections of road which just stop in mid-air or are balanced on a plinth with nothing connected to them either side. You could even call it temporary art. The project is due to be completed by the end of the year. 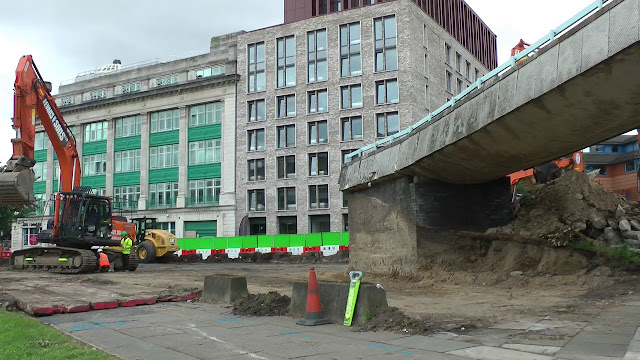