This is the most conventional episode so far which means its ideally placed to keep viewers who might have been feeling the series was meandering a little. Those of us who regularly review these sorts of programmes sometimes forget the simple things that appeal to larger audiences and part 4 has them in spades. Taking its cues from classic Western scenarios with an icy replacing the sand hinterlands of classic films, we have strangers on a mission arriving in a town where the reception is frosty in every sense. Lyra becomes even more proactive effectively persuading both Lee Scoresby, an Indiana Jones style aeronaut and a large armoured bear to accompany the Gyptians as they head even further North. There’s a bar fight, a cooped up formerly powerful figure and the authorities are not far behind. If we lose some of the less conventional aspects of the story we gain a self- contained tale of characters eventually banding together to head into danger. 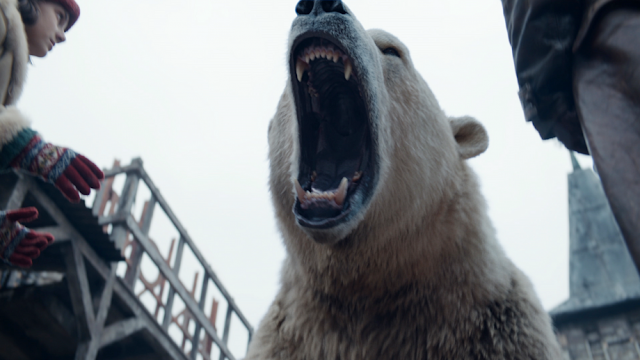 Visually the Western theme is carried through in the sparseness of the bleak location accentuating how far from home the characters are. There’s rusted metal everywhere, moored or land- lubbed boats in a state of disrepair and ice on the ground. It really sets the tone for the harsh North. Scorseby himself is very much a Western style hero in both dress and attitude. Perhaps the scene where he enters the bar could have done with some dialogue from the taciturn regulars – or even a bar room piano!_ but his arrival and the presence of his wry deamon Hester creates a necessary levity amidst the serious concerns elsewhere. With more information regarding the fate of the stolen children and the activities of the Magistrium and Mrs C becoming ever more sinister you suspect there won’t be many laughs elsewhere. Its an exposition heavy episode for sure but the information is despatched in interestingly different enough scenarios to make it work
CGI has become something everyone knows about so in the space of twenty years we’ve gone from “how do they do that water effect?” to “Well you can tell that’s CGI.” It’s a shame in a way we’ve lost our wonderment but you have to admit the armoured bears we see in this episode are amongst the best computer generated animals the small screen has yet managed. Unless of course they are real polar bear actors!
Photorealistic with expressive eyes and faces, powerful bodies and vocals that match perfectly Iorek Byrnison must be one of the most three dimensional computer characters ever. His story dominates an episode with several stories to tell and, just like those Westerns, there’s time for plenty of reflective conversations. There’s Father Coram’s history expanded giving James Cosmo the chance to be something more than the tough figure he often seems cast as. There’s also a lively Lin-Manuel Miranda adding levity with Scorseby’s story. Best of all there’s the noble Byrinson whose own tale of bad behaviour is underscored by a barely concealed ferocity in his eyes and in the voice. 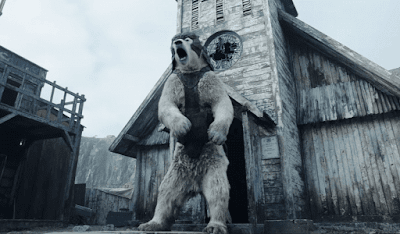 So often in stories like this the main character becomes somewhat repetitive and is outshone by showboating characters who turn up but you have to say the Lyra owns this episode. Under the wiser than her years ease with which Dafne Keen navigates her through, Lyra is every bit as determined and clever as the novels have her. Byrinson is ultimately is re united with his stolen armour in such a well- judged sequence when he wreaks havoc, confronts the guards and is then restrained by Lyra. The episode focuses on her ability to persuade complex and powerful characters to do as she asks, the opposite of other people’s threats or tricks. Does this make Lyra little more than a plot enabler? It could but she is such a well thought through character and brought to life so vividly by Dafne Keen that this never seems apparent. In an episode that is, according to programme guides (though never mentioned on screen) called `Armour`, the girl with the least armour is becoming the leader.