Review Round Up – The Great British Bake Off, Aladdin, Kitchen Nightmares USA

The 2019 Great British Bake Off concluded this week and our theories three years back that moving to Channel 4 would somehow spoil the programme have been proved so wrong. It just goes to show that we know little about how these things work because Noel Fielding and Sandi Tsovig are superb both at presenting and supporting the bakers. They’re pre show routines are funny too- one involving two cars is priceless.  We may scoff at the idea of baking being an emotional exacting art but there is something at stake here (unlike celebrity contests) because most of the previous winners have seen their lives changed since their victory. More than any other comparable show Bake off ensures its competition are encouraged rather than put through the wringer (some of the X Factor’s judging turns are just nasty) meaning that we’re all on the same side. It could also easily have become a programme where we laugh at failed bakes; instead we sympathise. 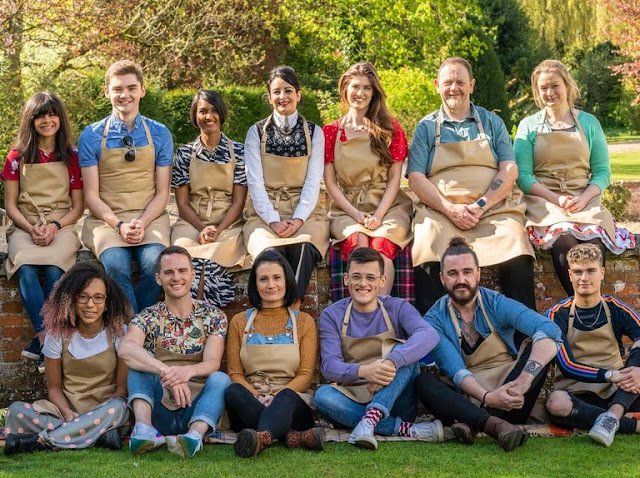 Watching these episodes back in the day the philosophical side of the series’ writing didn’t really make an impact on me, I was more interested in the spaceships, the planets and the action. Yet there’s quite a lot in an episode like `Missing Link` for a more mature viewer even if the end result is rather muddled. After a mission to check out a planet goes wrong, an Eagle crash lands a hundred miles from Alpha and while the others on the mission have less serious injuries the commander is in a coma and seemingly unable to be saved. However we see him wandering about a deserted moonbase stalked by floaty figures in long gowns. These turn out to be Zennites, a race with a fashion sense right out of Sixties Carnaby Street crossed with a circus. Their main man, Raan – played with as much dignity as he can manage by a silver faced Peter Cushing- sports a stripy tea cosy on his head while his daughter Vana is wearing some outrageously shiny accoutrements. They are more serious than their attire would suggest however as Koenig finds himself being seen as an experiment, a `permanent guest`. 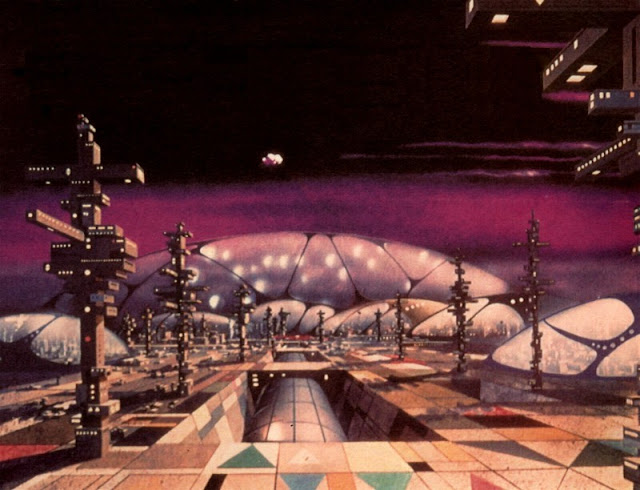 Yes, this is the one thousandth post on This Way Up blog and I’ve been wondering what to put in it. Should I perhaps drone on pretentiously about the art of the whole thing? Or dazzle you with graphs and blog stats galore?  Perhaps I should use it to say something incredibly controversial or maybe make a surprise personal announcement like they do on YouTube.  Anyway in the end I thought I’d indulge your patience with some unposted posts. “You what?” Not all of the stuff I write for the blog gets posted for various reasons mostly because I don’t finish it or the idea isn’t really substantial enough for more than a couple of paragraphs. So I fished about in the box (well there isn’t an actual box) and below you’ll see several never before posted items of varying quality.

There’s a lot of emotion on tv these days where everyone is on a journey and opening up to millions of strangers about their issues in all sort of situations. It can happen in a big tent where people are baking, a colourful studio where people are dancing or even on a canal. Such openness will be seen as the signature of this decade’s television as people feel more comfortable talking about pretty much anything in front of the cameras. Great Canal Journeys is the one which can never really have a happy ending with a trophy holding winner. It’s about growing old, about struggling to do things you couldn’t do before and about how true love is not just the province of the young. You’d expect two actors in this situation to be melodramatic about it in that way some actors have of being more stagey off stage than on. Timothy West and Prunella Scales though are honest and straight forward about their situation and the result is that it makes a programme whose premise may seem dull so packed full of life. 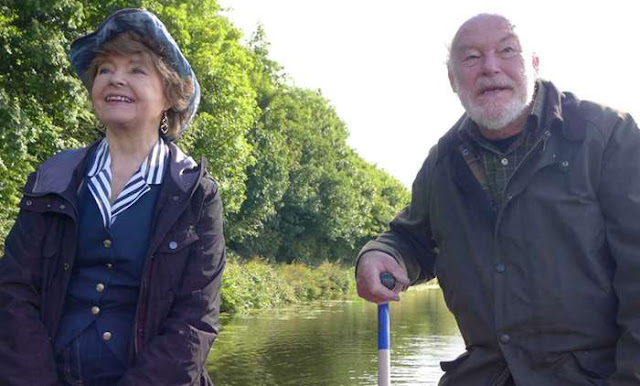 Reviewed by Chris Arnsby with toast. Mike Read: "Hello, welcome to Top of the Pops." Tommy Vance & Mike Read: " 'Allo, 'allo, 'allo, 'allo, 'allo. 'Ello, 'ello, 'ello, 'ello, 'ello." Tommy Vance: "Got the picture? 'Ere Mike, 'ave you seen who's down there?"
Mike Read: " 'Ello.'Ello." Tommy Vance: "Ooh, it's Kim Wilde."
[52] Kim Wilde: The Second Time. I'm charitably assuming that Tommy Vance says "ooh" and not "phwoar" which would obviously be an unacceptable way to refer to gorgeous pouting, etc Kim Wilde. I've no idea what Tommy Vance and Mike Read are doing in their introduction. Maybe they were plugging the start of series 3 of 'Allo 'Allo; 7.30 Friday, BBC1.
The best thing about Mike Read and Tommy Vance's introduction is it's location. For the first time in ages (ie, I can't be bothered to check but I'm going out on a limb and speculating that it's at least since 1981 when Yellow Pearl became the theme tune) the hosts don't introduce the show standing next to the neon Top of the Pops logo. Instead they're up on one of the catwalks. Check out the view of the studio behind them. Phwoar! Now that leaves nothing to the imagination. If only Mike Read and Tommy Vance would move out of the way we could really cop an eyeful.
It's a little glimpse behind the scenes as the studio warms up for the first act. There are a couple of dancers/audience cheerleaders standing on a podium who applaud and then start dancing, and round the fringes of the crowd you can see the usual gang of mystery BBC employees whose function is obscure. (John – Undercover ITV agents probs) 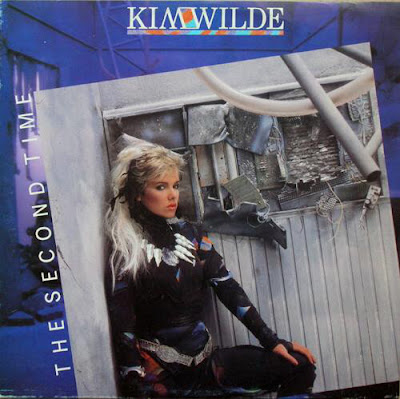 Space 1999 - Another Time, Another Place

A textbook example of how to create and present an episode, Johnny Byrne’s time twister proves to be absorbing and thought provoking all the way through. An unexplained space phenomena appears to create two Moons. The Alphans wake up in another solar system that looks mightily familiar and there’s the Earth- or is it? Like an episode from the original Star Trek this episode packs in so much more than just action and thanks to David Tomblin’s top class direction every nuance of the story is presented to fascinating effect. If some directors treat this sort of series as another job it really shows when someone takes that extra care. Tomblin emphasises the weirdness of the situation especially when one of the crew- Regina- is given to crazy episodes where she thinks she’s married to Alan Carter – and he’s dead. Cue some bemused looks from the head Eagle pilot. 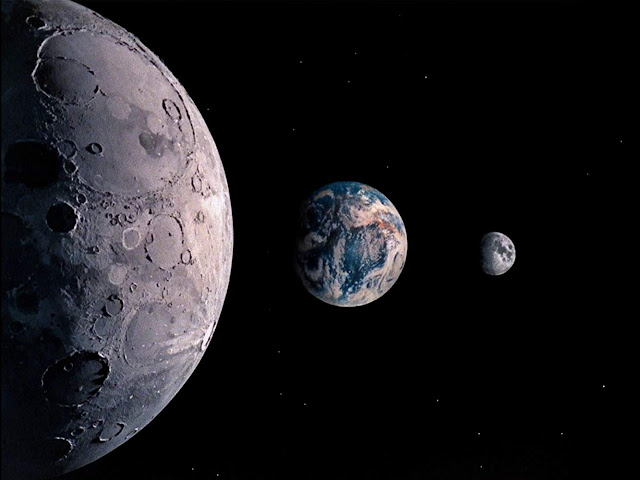 Reviewed by Chris Arnsby. Simon Bates: "Thursday night at Television Centre [indecipherable] Top of the Pops. It's so packed tonight I've forgotten who's on, Richard." Richard Skinner: "Tell you what. How about The Stranglers, Culture Club, and Adam Ant, live. Plus, in the studio now here are Bronski Beat and Why." 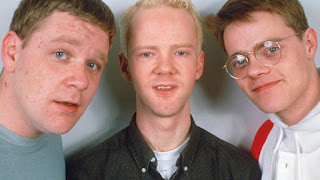 [4] Bronski Beat: Why? BBC4 skipped over September's final Top of the Pops because one of the hosts was Mike Smith. The result, on BBC4 at least, is that Bronksi Beat take pole position on two back-to-back editions.  The question everyone is asking is, what's the picture on the front of the vest worn by the stage right keyboard player? The picture on the vest of Larry Steinbachek (probably) is the cover of the single. An image of a man with his head in his hands by Glasgow artist Robert McAulay (thanks Wikipedia). Presumably the vest, and the t-shirt with the same picture Larry wore on the 20/09/1984 edition, were promotional material from London Records. This explains how Larry is able to wear a black t-shirt and two weeks later a black vest with the same picture without doing some pretty serious alterations; like Marge Simpson in the episode where she buys a Chanel suit. The stage left keyboard player (possibly the eponymous Bronski himself) has finally given in to his mum's nagging and put on the jumper his nan brought him last Christmas. She will be pleased.

This is a difficult film to assess because it’s not clear what it is trying to achieve. Is it a study of mental decline and how there are never enough resources to deal with it? Is it an origin story for a well -known comic book character? Is it a serious art film sneaking into the mainstream under a populist masthead? Is it a gratuitously violent movie with little soul? Is it a vehicle for a performance which tilts knowingly for Oscar glory? Well it is all of these things at various points but never really coalesces into a particular direction. As for just being entertainment it is simply not a film anyone could surely enjoy in that way. In case you hadn’t twigged the title is ironic- there’s not a single laugh in it.
Spoilers past this point 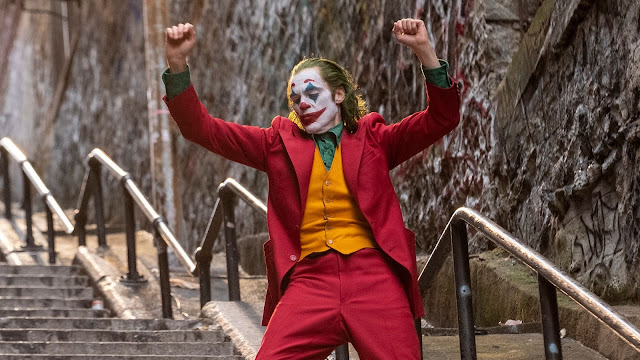 Reviewed by Chris Arnsby. Andy Peebles: "Good evening. Hello and a very warm welcome to this week's edition of Top of the Pops." Steve Wright:"And we're going to kick off tonight's show with those Bronski Beat boys. Here they are with Why?!!"


[22] Bronski Beat: Why? Jimmy Somerville has taken a course in being a pop star. He's learned a whole new set of moves since Bronski Beat last appeared on the 07/06/1984 edition; he's mastered the art of crouching slightly to play to the low angled camera; he spins on the spot; he points; he pouts; he blows a kiss to the camera; and, perhaps sweetest of all, he beams with delight when he pulls of a dance move that gets whoops of approval from the audience.


It's just a shame he's decided to dress as blandly as possible in a beige shirt, daringly offset with beige trousers. If you want genuinely eighties style you'll need to point your eyes at the back of the stage where abstract graffiti-style shapes have been airbrushed onto a backcloth.


Bronkski Beat set tonight's trend. This edition of Top of the Pops is full of first class groups presenting slightly second class material. That said, the only reason to call Why? second class is because it's not Smalltown Boy. 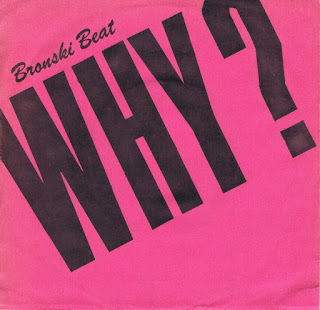 Space 1999- Ring Around the Moon & Earthbound

Ring Around the Moon
For an episode that presents such a big threat to the Alphans, `Ring Around The Moon` is not in the least bit exciting. Its threat is a huge glowing sphere from the planet Triton in which a large eye occasionally appears, and which goes about things with a methodical method that unfortunately means everything takes a long time to unfurl. At the same time all of the dialogue is very much technical and therefore a bit dull. All this made my attention wander as the umpteenth golden forcefield shimmied across space and I was drawn to the odd musical score employed for the episode. There’s mysticism, jazz, classical and fusion all chucked together as if someone who doesn’t normally do this sort of thing is assembling the incidental music. It is all the more noticeable as large chunks of the episode take place without any music at all. The only time the music seems to match the visuals is when we’re inside the sphere which also happens to be the most visually interesting aspect of the story too. 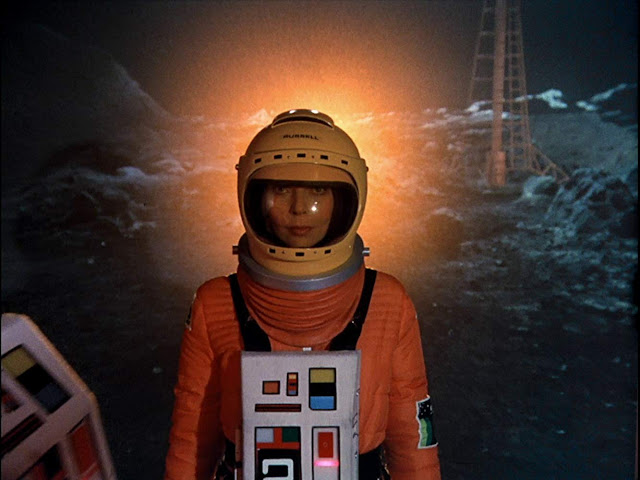