Last Sunset
Just as the Alphans look into the possibility of settling on a planet called Ariel, an alien probe attaches itself to an Eagle and once esconsed in the base suddenly releases what appears to be gas but turns out to be air. In record time this spreads initiating a speedy (and well realised) terraforming that gives the Moon a blue sky, a Sun and fresh air. It doesn’t take long before people start messing around in swimsuits. Its rare for an episode to contain so much that is incredulous yet to centre around a narrative that proves to be reasonably gritty for the series. The new look lunar landscape turns out to be something of a convenience for the show to undertake a `main characters stranded` episode which it does rather well. 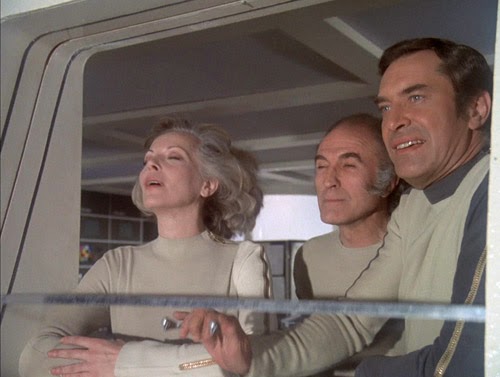 Thus when Helena, Paul, Sandra and Alan end up stranded in the faux desert with no supplies, their Eagle near invisible half buried in desert terrain the episode gets good. Thanks to director Charles Crichton’s eye for an interesting shot and writer Christopher Penfold’s determination to wring a lot from this scenario the results are very convincing. Even though its filmed on a studio set you get a real sense of a difficult outdoors location while all four actors seem to relish the opportunity to get more than usual to do. Prentis Hancock has the best role though as an increasingly desperate Paul goes rogue then eats some fungus he finds outside that looks rather like mushrooms. Before you know it he is talking like the leader of a new planet and Prentis Hancock gives it his wild eyed all. Oh and Alan has a fight but then he does tend to do that every episode!
The dust and heat plus the heavy metal of the damaged Eagle ship are so convincingly realised while the methods the stranded crew use at different points rely for a change on their ingenuity rather than any high tech solutions. Helena in particular looks lost without her equipment! All this contributes to a tense and intriguing survivalist drama.
It’s a pity then that the last few minutes drop the ball. Having dazzled with such creative direction and lovely images till now, it is a shame the fight sequences near the end betray extensive use of stunt people in wigs! On the writing side having admirably smoothed the corners of what could have been a more awkward storyline, Penfold concludes the episode with a message from the aliens rather than leaving their motives obscure. It just spoils the mood a little though the last Sunset from which the episode takes its title is a strong way to finish an interesting and mostly very well assembled story. 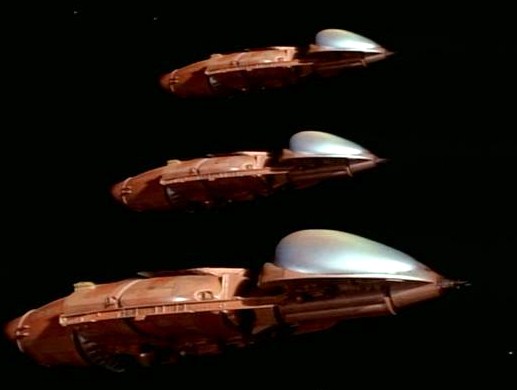 
A thoughtful and different take on the subject of science versus responsibility sees an earth probe from 1985 called Voyager approach Alpha. Launched to discover new life and gather data it’s flaw was the Quellor Drive, designed to facilitate such a lengthy mission but possessing a side effect that can destroy planets. Now with a limited time period left, the Alphans try to think of a way to extract the valuable information it contains. It’s an odd episode because while being well presented and acted, the plot is just a little too convenient. Turns out that Professor Ernst Quellor himself is on the base albeit working under a pseudonym. Another handy story coincidence is that his research assistant Haines just happens to be someone whose parents were killed by the effects of this drive. Even if you can swallow these contrivances it begs the question as to why there was never an investigation into the whole thing (this is not the only Voyager with the drive we later learn) and work on it suspended. Or indeed how its presumably well known inventor managed to bag a post on Alpha without anyone at all recognising him.
Then just when Quellor’s made his breakthrough in terms of getting the necessary information, Haines figures out who the professor really is- even though he is clearly in earshot when a dialogue between Queller and Victor takes place which makes that obvious. Later on still some powerful aliens turn up to dispense justice on the whole of Earth as the drive wiped out two planets worth of their people. While all this stacks up you wonder why they haven’t done anything till now and why when the thing is in range they don’t just fire. Trouble is the story makes the nature of this drive so vague and variable that it might just as soon be called the Maguffin Drive. Some of the equipment Queller uses to try and interfere with Voyager’s systems doesn’t convince either being basically a collection of flashing lights.
While such things might sink a lesser episode, there is still much to enjoy including some proper professional differences between the leading crew over what to do (and Carter doens’t threaten to lamp anyone for a change!), a really tense final sequence and some excellent on screen effects although the director clearly forgot to ask anyone to react to them. There’s also a sympathetic performance from Jeremy Kemp who overcomes having to talk in a very theatrical German accent to put across Queller’s feelings of guilt over what happened and by the end becomes a more sympathetic character than you’d imagine. The idea is great but the realisation contains just too many coincidences to be believed,