What makes this series work so well- and this is true to the source novels too- is that the fantastical element is woven into a narrative that has enough familiarity to drawn the viewer in. A lot of fantasy show go the other way trying to dazzle with visuals depicting things that don’t seem relevant to right now. This measured third episode combines the tension running through the second with the movement of the first yet at its heart is a very human drama. A mother missing her stolen child, a community debating how to fight back against an oppressive regime, family secrets brought into the open. These could feature in a more conventional drama so we understand them. What the series also does well is share the perspective of a number of key players. The 8 episode format allows space for character beats and conversations that head off in interesting directions. Quite how one tv critic can call it “an uneventful hour” surprises me. 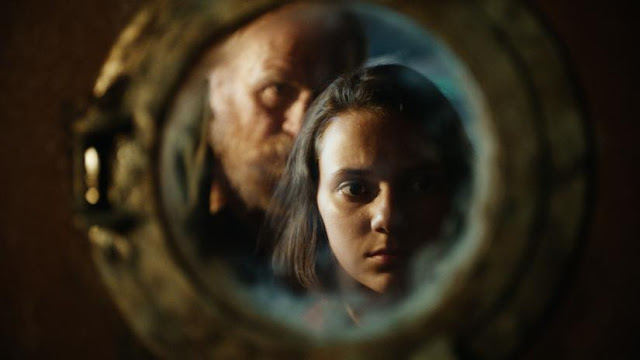 The big shock for Lyra this week is discovering that Mrs Coulter is her mother, which paints a different sort of picture and makes you want to revisit last week’s scenes between them. It explains Mrs C’s strange attitude and unwillingness to reveal too much yet also her fierce determination to leave no stone (or indeed Oxford college) unturned in order to find Lyra. Again there is a brilliant authenticity in the fiercely committed performances of both Ruth Wilson and Dafne Keen. Also Anne Marie Duff’s Ma Costa comes into her own with some scenes that show both her strained side but also her boldness. Somewhere you feel there’s another story about the life of Ma Costa!When she tells Lyra the truth it is quote a moving scence even though they're outside on a windy hill.
The Gyptian plot is building well and there’s a whiff of Game of Thrones about the way they are coaxed into fighting back and heading North. It has been a good move for us to get to know them more than you do in the books at this stage and Lucian Msamati’s nuanced performance has been a highlight of the series so far. As a leader he has a difficult time this week and we see why he is in this position.
What happens to Benjamin in the botched raid on Mrs Coulter’s apartment is an example of how this story as a whole is much grittier than Harry Potter with which is often used to be compared. The sudden death is a jolt to the viewers and a reminder of the high stakes. Mrs Coulter’s drunken walk along the balcony edge is another example- recalling what she said last week about heights and what happens in her lift later. And isn’t her demon monkey just the scariest thing on tv all year?When its mistress mimics the sort of frantic attack it also unleashes on Benjamin's demon you can see the deranged yet powerful figure she is. 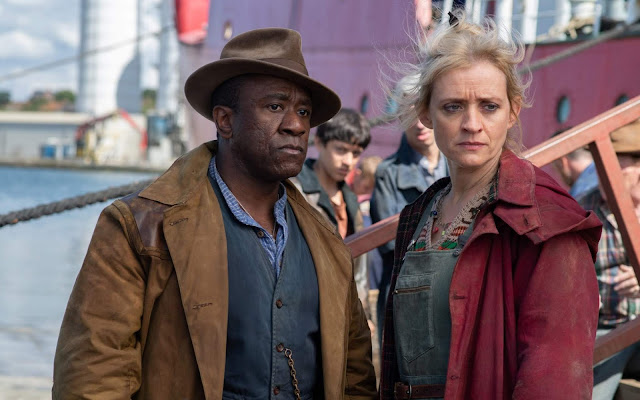 I’m less gripped though by the altheometer if I’m honest and it which irritated me in the novels too as however its pitched it is really a handy device to move the narrative on as it does here. No complaints though about the tension built up in the sequence where the guards search the Gyptian boats.
Meanwhile Boreal’s forays into the our world turf up another development that doesn’t show in the books till later, namely that Grumman, whose apparently severed head was seen in episode 1 is actually still alive on contemporary Earth.  They even confirm the casting news of who is playing him in season 2 by showing us a photo of the very well -known Andrew Scott. At the speed they’re unveiling things he might even turn up this season. Its good too that amidst the grimness and danger the production still has space for a few lighter moments; this week Boreal discovers his car has been clamped and no amount of Magisterium power can do anything about that!