The War of the Worlds Episode 1 review

You’d think that this story would be too familiar to re-tell, too associated with a soft rock stage show or various adaptations that have struggled to do justice to the power of the original story. However you’d be wrong. This opening episode is a stunner alright, building up for quite a while, simmering and heating until it explodes in a sequence that certainly justifies the warnings that this is not suitable for younger viewers. If you thought Martian invasions of this kind were cumbersome, cosy games of hide and seek while those familiar tripods loom on the horizon then watch this one. There are lots of rumours as to why this production sat on the shelf for a long time. Originally trailered for the autumn 2018 season and filmed more than eighteen months ago it could have been because the effects weren’t ready. Or, I heard an odd one that the BBC didn’t want to show it till after Brexit though that doesn’t make much sense. Another story I heard that it was because it wasn’t very good they were looking for a slot to see it off. Well it is very good indeed and whatever the real reason for the delay I’m glad it’s here now. I suspect whatever the initial viewing figures, this will be a production that grows in reputation over a longer time.
It is a potent story of course which terrified radio listeners the first time it was dramatized and retains a power despite countless re-tellings. How else do you explain its success as a concept album and stage show in the Seventies. While retaining much of the original novel, Peter Harness makes some subtle alterations to mould a story with greater resonance for our times though I don’t think this is overdone. Yes, people have called this version of Woking too Woke but its not like these people didn’t exist in Edwardian times rather they were excluded.
The chances of something coming from Mars are a million to one (and I’d imagine in real life more than that) but still they come and when they appear here it’s powerful stuff. Bystanders are evaporated by a revolving black globe and as they flee it’s into the path of those iconic three legged Martian war machines realised here as well as I’ve ever seen and accompanied by echoing noises. Thankfully they haven’t messed with the design but what the subsequent scenes do is show just how devestating they can be. They loose their fire randomly, blowing tops off buildings, killing fleeing civilians and an English country village soon becomes as bloody as an battlefield. Director Craig Viveiros pulls us right into the mayhem of it avoiding anything that looks too choreographed to create chaos everywhere. Nice and not so nice people perish- the first to go is the pompous official who sips tea whole everyone else grafts. Then that friendly maid we’ve seen a few times is randomly flattened by a falling wall.
Rafe Spall is our hero George who has already fled a disastrous marriage to his cousin to live with intended Amy in the picturesque Woking near Horsfall Common where what at first seems to be a meteorite lands. There’s time for some lighter hearted banter between the two and neighbour Ogilivy, a photographer who lives in a palm house. Spall has a good line in straight faced honesty while Robert Carlyle makes an unexpectedly authentic dotty scientist. Yet Eleanor Tomlinson steals the show here with an effervescent lively performance drawing the best from Harness’ depiction of Amy as an independent woman. 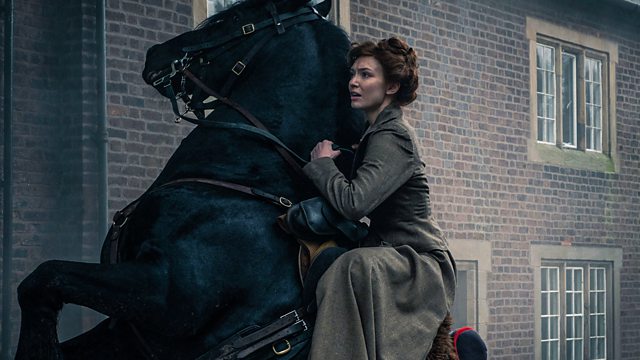 Strong support comes from the wonderful likes of Nicholas Le Provost and Rupert Graves. I don’t know if they’ve worked on much together but here they seem like the most English people ever shoring up Edwardian values and attempting news management of something they don’t understand. The familial issues work their way into the Martian war machine plot surprisingly well adding verisimilitude and meaning we know a little about these characters before they are catapulted into a nightmare.
The other aspect of the episode is the repeated sequences set in a harsh orangey vista which the viewer assumes is Mars only for it gradually to become apparent- though not confirmed till the last scene- that this is a throw forward to a ravaged Earth. Beset by red dust, electrical storms and wandering nomads, it is a hellish suggestion that this isn’t going to end well for our characters at all.
This is a vibrant, powerful and extremely well rendered opening salvo and just like the humans vs Martians the audience will succumb to its power
Martians in Liverpool!
I live near the palm house seen in the episode, which was only renovated relatively recently. The series was filmed in and around the Liverpool area with a cast and crew of around 100 people. The shoot lasted nine weeks from March to May 2018.. Locations used included inside and outside St George’s Hall (inside is where Chamberlain addresses journalists and also where the refugees come to) Croxteth Hall, Sefton Park Palm House and Martins Bank Building on Water Street and  Eldon Grove in Vauxhall. The Cheshire village of Budworth becomes Woking where the Martians strike at the end of this episode and filming there lasted three weeks.   Ainsdale Woods is where the Martian globe lands in part one and there were also scenes shot on Formby Beach. An alien landscape was created in a disused Wirral warehouse.
Peter Harness told local site Liverpool Express:  “We filmed in Liverpool because it’s the greatest city in the universe! Liverpool has locations that are pristine, it offered the landscapes we needed and also had the crews up there – and people are extremely supportive of what we were trying to achieve.”
Craig Viveiros, said: “Liverpool was great when it came to its architecture and the ability to close it off to dress it and shoot it. Locations like St George’s Hall, Formby Beach, Croxteth Hall allowed us to film there and are key scenes in the production.”