Reviewed by Chris Arnsby. Mike Read: "Hey, lucky you caught us. Me and Bruno here are in a mellow mood, luckily we're going out nightclubbing later on."


Bruno Brookes: "Absolutely. I feel in a cocktail mood already. Tell you what, let's go with Matt Bianco right now." 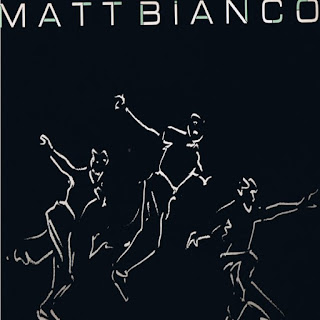 [34] Matt Bianco: Half A Minute. Mike Read and Bruno Brookes are both wearing dinner jackets, and Mike Read has adopted what he believes is an American accent. Is all this talk about nightclubs and cocktails a clever reference to Matt Bianco and their music for wine bars? I neither know or care. Matt Bianco are on the main stage, the one with the audience at the front and back. I wouldn't dream of suggesting that this performance leans a tiny bit in the direction of possibly being not very interesting, but this is a good time to study the studio lighting grid. It's been upgraded. The lights above the performers are organised into geometric shapes that project down through the studio smoke. It looks great in wide shots.


The new lighting layout was introduced last week and premièred above Limahl and so-called Mandy. I didn't notice at the time because I was distracted by Richard Skinner mouthing "help me" at the camera while Simon Bates told me what time it was in 1984 and went on and on about Spurs and got Never Ending Story's title wrong. Bill Millar is credited with Lighting on this and last week's edition, so I'm going to assume the new lighting layout was his idea. Well done Bill. 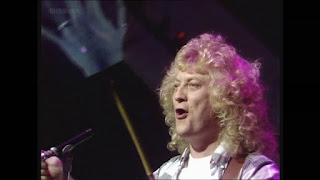 [38] Slade: All Join Hands. Not on my copy which jumps from the end of The Wild Boys to Mike Read holding his guitar for reasons which are now lost like tears in the rain. Why snip this performance from the early evening BBC4 repeat?) Surely it makes more sense to edit out the music videos and keep the unique studio performances? Still, no harm done. Slade's performance is on Youtube. (John- Look at you- you are so Michael Hurll!)  Let's fire up the browser and take a look; ooh the printed SLADE banners have been handed out again; I don't much like Noddy's blue tartan-style jacket; "I remember the time when we sang Auld Lang Syne" it's only mid-November; is this Slade's 1984 Christmas single?


And that's your lot. In retrospect, cutting Slade's performance is not a terrible loss. Maybe there are boring editorial reasons for the chop (repeat fees) but if it's simply to squeeze a 40 minute programme into a 30 minute slot then surely there are more logical songs.


[24] Eurythmics: Sex Crime (1984). On video. I remember a sarcastic review of the film version of 1984 which asked rhetorically, "what's in Room 101?  Eurythmics singing Sex Crime on an infinite loop."


[3] Jim Diamond: I Should Have Known Better. Also snipped from my BBC4 edition. OK, back to Youtube; oh, it turns out I'm thinking of the Beatles song. Whisper it softly but, this isn't very good. No wonder BBC4 excised it. Jim won't be back in the Top of the Pops studio.


[31] Alvin Stardust: I Won't Run Away. Alvin was having a mini-comeback in 1984. He's been releasing a couple of singles each year since 1981 but with the exception of Pretend, number 4 in 1981, they generated little interest until 1984's I Feel Like Buddy Holly.


A search of BBC Genome confirms 1984 was the year the Alvin Stardust bandwagon briefly rolled again. He turns up on Pop Quiz, Saturday Superstore and even some programmes not hosted by Mike Read like Crackerjack and (oh god) the Keith Harris Christmas Show which sounds like televised leprosy; although I'd love to see the act listed as "The incredible tumbling Ding Bats and Patrick Moore" possibly a comma got missed out while scanning that Radio Times entry (there's also a cracking OCR scanning error in the entry for Saturday Superstore on 27/10/1984 which poses the thoughtful question "How can we help our leathered friends survive the winter?")


I don't know why 1984 was the year the planets briefly aligned again for Alvin Stardust but off the back of it he got to sing The Clock On The Wall for 1985's A Song For Europe; he came third. 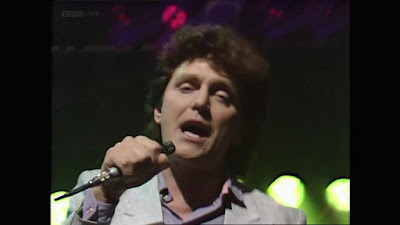 [17] Nik Kershaw: The Riddle. "The thinking man's Limahl" (©Smash Hits, 1984). Near a tree by a river, etc. Nik Kershaw sings his version of Kit Williams' Masquerade. (John- is that about an old man spinning around in a hole in the ground too?)


[14] The Pointer Sisters: I'm So Excited. Chaka Khan is in the Top of the Pops studio. So why did we watch the video? Chaka would like a Top of the Pops hat and flag. What would we do without these exclusive interviews? "Now you can join the crowd and have a good time," says Mike Read just before the credits roll. Subsequent wide shots show the trio fled as soon as the camera panned off them.


Performance of the week: Nik Kershaw: The Riddle.
Posted by John Connors at 23:03