When the first baby is born on Alpha celebrations soon turn sour as the child grows by five years in a few seconds though everyone except Koenig seems to take it in their stride. By no coincidence whatsoever an alien spaceship also turns up and the commander is the one who spots a connection between the two events. You never know which way this episode is going to turn. At first the kid- named Jackie Crawford- seems relatively normal but director Ray Austin captures some spooky shots of him that wouldn’t be out of place in a horror movie. It soon seems that the child has some psychic powers which also set up the weekly argument with Alan Carter! 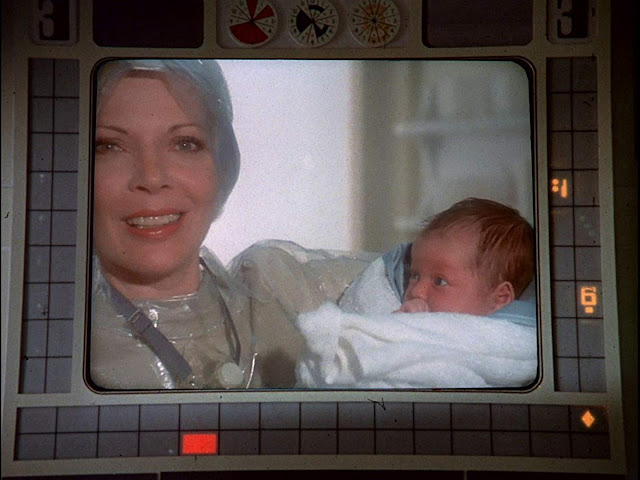 What happens next is perfectly acceptable in your average 70s sci-fi tv show but looks a bit naff now. As you’d expect the child grows again into a man played by Julian Glover but unfortunately he is wearing a very tight silver outfit that makes him look ridiculous! Glover does his best but his clobber constantly threatens to suck the menace from his character even when he is threatening the entire crew with imminent death so his people can take over their bodies. Presumably they’ll be bringing their own shimmery clothes!


There’s a lot to like about this episode which shows a less technical, more human side to the cast as characters react to the child. Alan whizzes him about like an Eagle, Victor has him drawing but you know there’s something up when Jackie is more interested in that globe thing that Victor also stares into. Barbara Bain in particular is excellent whether cooing over the newborn, then horrified by developments and later in the control of the silver clad Jarek. It’s a strong episode for Martin Landau too though the writers do seem to constantly make him the only one who can see through alien deception and trickery. Didn’t anyone else do the course on alien deception and trickery? 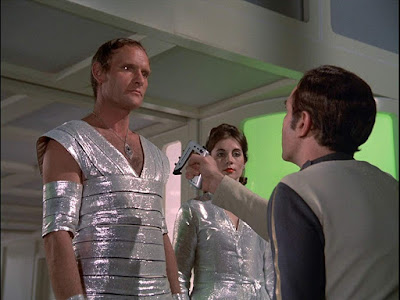 Writer Christopher Penfold adds a little more substance with discussions between the Alphans over their reaction to events. While using Jackie as an example could have been influenced by the kid himself it still makes a valid point. Sometimes it seems as if the crew are constantly struggling to decide how to react and if their default position is to attack episodes like this show how futile that can be. I’d have liked some more references to the impact of a birth on the base before the odd things start to happen. At the start we see everyone nervously awaiting news and it would have added another layer to have had some characters talking about their own situation as they surely would have reflected on it. As the aliens’ ultimate plan is brief in execution there would have been time in the episode for something along those lines.


It’s a great episode if you like spaceships and it shows where my priorities lay when this was originally shown as these were the only things I remembered. Yep, it’s the episode with the long spaceship in it. Interestingly we never see who is inside it but their arrival is well timed at a point when all of the crew are choking to death. Even though I know there are many episodes to come I am thinking- how are they going to resolve this? When it was first shown it must have been real edge of seat stuff. Having shown us someone growing from birth to middle age in a few days the episode signs off with a lovely finish that makes a sort of sense but leaves you with a warm glow.
Posted by John Connors at 22:56