Reviewed by Chris Arnsby. John Peel: "Hello again. We're the joy boys of radio." David Jensen: "Chasing electrons to and fro." John Peel: "Welcome to another Top of the Pops. Lots of treats again this week including the Top Ten Video Show." David Jensen: "Our opening melody comes from Icehouse and Hey Little Girl."
[17] Icehouse: Hey Little Girl. The David Jensen/John Peel double act continues to develop. Tonight the pair are wearing jumpers with the others name on the front. Rather unfairly John Peel's jumper reads "Kid Jensen," when David (that's Mr Jensen to you) dropped the Kid moniker ages ago. In case you were wondering, that "joy boys of radio" comment is a reference to Ed Walker and Willard Scott of Washington D.C. radio station WRC. (John- Is Chasing Electrons a band? It’s a good band name) 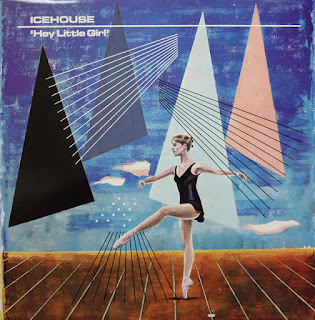 [12] Forrest: Rock The Boat. A music video that looks like a technical demo for the Quantel DPE 5000; multiple picture windows; frame delay effects; freeze frame; picture transitions; it's all there. 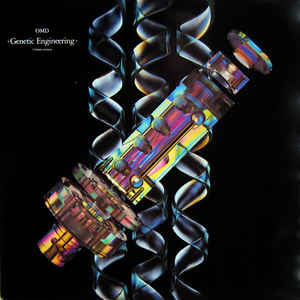 [25] OMD: Genetic Engineering. John Peel describes OMD as "a right bunch of wools," probably a searing insult back in the dark days of 1983. (Scouser John- I think he means woollybacks which is an odd Liverpool insult for people who live over the water on the other side of the Mersey) OMD themselves appear on a new stage decorated with neon tubes fixed to a fake marble backing. It's a look I associate more with early 90s daytime telly. At the end of the song David Jensen has the same question as me, "what are wools?" John Peel remains mysterious. "Well, they are actually, and so I am. But find out more during the Radio 1 week out in Liverpool." If you missed it, the Radio 1 Week Out on Merseyside included gems like D*v** L** Tr*v*s at Birkenhead Market with the Radio 1 Roadshow; Mike Read presenting the breakfast show quide liderally from a ferry 'cross the Mersey (with Gerry Marsden and Peter Powell); Simon Bates' Magical History Tour "Simon goes here, there and everywhere in the footsteps of the Fab Four" (that's original); and Steve Wright aboard the Royal Iris for a cruise with an invited audience.
[21] Bananarama: Na Na Hey Hey Kiss Him Goodbye. On the walkway above Bananarama there's a smartly dressed dancer in a black suit, white shirt, and bow tie ensemble. He bears a slight resemblance to a young Michael Jackson. He can be glimpsed dancing down the walkway stairs as Bananarama enter the final round of Na-Na-Na-Nas. Where's he going? Has he suddenly remembered an appointment? He dances out of shot and is gone until the camera cuts back to John Peel after the Top 20, and there he is suddenly beaming over John Peel's left shoulder.
[18] Patti Austin & James Ingram: Baby Come To Me. A repeat performance from the 17/02/1983 edition which was edited out of the BBC4 repeat because the song was introduced by J-n-th-n K-ng. Now Patti Austin & James Ingram get their moment to shine. What's the verdict? It's all right. Terrible blurry picture quality for some reason.
Top Ten Video Show: "You wanted to see it again," lies David Jenson as he introduces a second and final outing for the top ten video countdown first seen on the 3/2/1983 edition.
[10] The Fun Boy Three: Tunnel Of Love. It's The Fun Boy Three performing Tunnel Of Love in a studio. Couldn't Terry Hall, Neville Staple and Lynval Golding have been filmed on a real tunnel of love? There was one at Dreamland in Margate. Get Terry Hall in a Kiss Me Quick Hat. It would be hilarious. (John- He’d still look fed up)
[9] Thompson Twins: Love On Your Side. The Thompson Twins are also studio-bound but they've made more of an effort to hang up some sheets, and ropes, etc to give the place a bit of atmosphere.
[8] Madness: Tomorrow's Just Another Day. Meanwhile Suggs and the boys are on film.
[7] Tears For Fears: Change. Curt Smith croons and gets to ride in a glass lift.
[6] Musical Youth:  Never Gonna Give You Up. A horribly washed out copy of the promo film, someone needs to sort out the brightness setting. 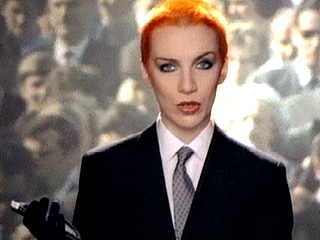 [5] Eurythmics: Sweet Dreams (Are Made Of This). Annie Lennox and Dave Stewart have finally escaped from The Tourists (last seen on Top of the Pops in February 1980). Eurythmics actually made their début appearance on the 24/02/1983 show, but BBC4 skipped that due to Andy Peebles sharing presenting duties with  D*v** L** Tr*v*s.
[4] Toto: Africa. Dah, dah, dah, da-da, dah, dah. (John- Just like Olympus rising above the Serengeti, actually)
[3] Kajagoogoo: Too Shy. Another horribly washed out piece of film. Maybe the brightness is too high on my monitor? (John- No it’s the jumpers)
[2] Bonnie Tyler:  Total Eclipse Of The Heart. Just for a change here's some grainy low light16mm footage with what appears to be a guest appearance by the Children Of The Damned. (John- Don't forget smashing mirrors and slow motion doves!)
[1] Michael Jackson: Billie Jean. No audience dancing this week. The closing credits are played over Michael Jackson.