An occasional series looking at ads of the moment.
Bud Light - “Dilly, Dilly”
The best thing for an ad campaign is that it contains a slogan or saying that sticks in people’s heads yet this can also be the worst thing if they don’t actually remember what the advert is for! Bud Light’s latest may be destined for such a fate as it’s tagline is much more prominent on the advert than the product. Though American Bud Light- a sort of weaker version of Bud – seems aimed at European markets with its medieval theme showing a banquet at which people bring gifts for the King in the form of packs of Bud Light. The King accepts these with a call of “dilly, dilly” which is then repeated by the assembled. However one man brings “honeymead” beer that he likes for which he is dispensed to the “pit of misery”. The campaign was created by the Wieden + Kennedy ad agency and launched last August to coincide with the season finale of Game of Thrones and there’s a second ad, not yet seen in the UK, that follows up the story in the Pit. A third ad set on a battlefield debuted at the Superbowl last month. 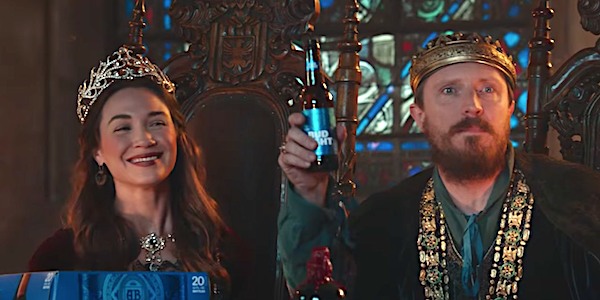 The whole thing has taken off in the States with the phrase going viral, the likes of sports commentators and even Best Man speeches incorporating “dilly, dilly”! You can even buy t shirts with the phrase on it. Some commentators have likened it to the “whassupp” campaign that became famous all over the world (and possibly the inspiration behind the name of WhatsApp). Of course the question on everyone’s lips is exactly what “Dilly Dilly” means. Is it a real medieval expression? Or was it concocted in the heat of an advertising brainstorm? 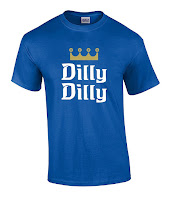 Miguel Patricio, is Chief Marketing officer of Anheuser-Busch and responsible for the campaign and when asked about the phrase said: “Dilly Dilly" doesn't mean anything. That's the beauty of it. I think that we all need our moments of nonsense and fun. And I think that "Dilly Dilly," in a way, represents that.”  However this is not entirely true. The word `dilly” does exist though is little used nowadays and is described in the Oxford Dictionary as “an excellent example of a particular person or thing”. What’s more its origin is not medieval but late nineteenth century North American! There’s also a similar word “dilliest” which has a New Zealand origin.
The real skill of the ad is that “Dilly Dilly" sounds authentic and funny at once and if you’ve seen the ad a few times you will find at random moments the phrase will pop into your head!

Dior - Natalie Portman challenges you!
You know how most adverts for perfume show beautiful people adoring each other and only ever being seen either having fun or looking enigmatic? Well, Dior’s September 2017 launched ad  takes the sheen off this by depicting a couple who bicker and fight yet also share intimate moments. In fact like a real relationship. Two things though really stand out from this refreshing campaign. One is the use of Sia’s `Chandelier`, a 2014 song that seems ideal to depict a tempestuous affair. The other, which really takes you by surprise when you first see it, is how the ad ends with the woman - played by Natalie Portman no less - turning directly to camera and asking “and you, what would you do for love?”. While looking into the lens has become more common in recent years this is usually within the fictional context such as the holiday advert where someone is leading their partner though various locations. To directly challenge the viewer and bring them into the fiction is rare for an advert. 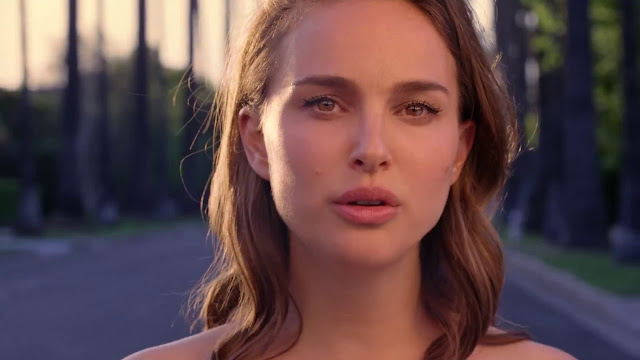 It was made by Iconoclast and is directed by Manu Cossu while Natalie Portman has been associated with the brand since 2010 and brings a level of acting you wouldn’t normally expect in a perfume ad.  It is easy to see her enthusiasm for the idea reflected in these comments: “I think this fragrance really presents a more rebellious side of love. It shows all the different aspects of love  - the passion and the tenderness and the joy and the ferocity.”    We can understand that though quite how a fragrance can be anything other than a smell is- like detecting a personality for a type of wine – something that remains a mystery to most.

Tui - “Ain’t Nobody…”
Nagging, insistent, irritating? This ad is all those things yet its style is something worth writing about. It’s the latest campaign from the oddly named holiday company Tui which used to be the more sensibly titled Thompson. You can almost visualise the think tank that came up with the slogan that is attached to this ad. It declares “We dot the I’s and cross the T’s and put U in the middle”. The representation of this is a holiday maker singing “Ain’t Nobody” while pursued by a trail of dancing attendants.  Further parts of the ad have expanded the scenario into a full blown routine. What stands out though is how the thing is deliberately given a deliberately relaxed touch. The routine is no tightly choreographed pop video but looser and more casual to reflect that these people are on holiday. So when she’s followed by dancers they do not seem as tightly drilled as you’d expect while her singing is relaxed.   She looks bemused yet pleased by all this dancing going on around her. The woman is played by Bethany Slater though it’s not her actually singing- that is done by Alice Higgins. The latter had to sing it as though she was being lifted around as in the ad which must have been an odd studio session. 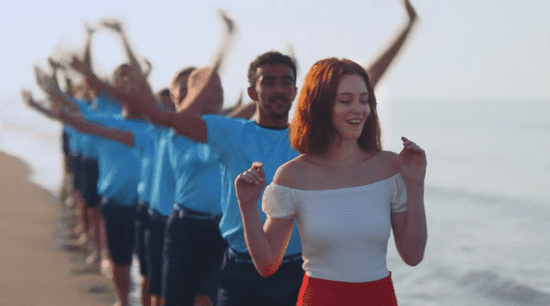 The advert was shot in Turkey using 45 dancers, 50 extras and a crew of a hundred.  The aim is clearly that you are the `star` of your holiday though people should not necessarily expect a musical routine to be built around them (though wouldn’t that be an amazing idea?) The company’s creative lead Pip Bishop describes how the various parts fit together: “The beginning of the video reflects how you feel when you go on holiday. Our heroine starts off quite tentatively, as you do when you arrive on holiday and you’re not sure where everything is. It’s all new and exciting. And then, as the film goes on, she becomes more and more confident, until the finale where she just lets everything go.”
The one thing the ad doesn’t tell you is what the name Tui actually means. For such an odd name it’s proven very pliable artistically not only in the case of this ad but also the logo which becomes a smile. Disappointingly the truth is that it’s simply a dull series of initials standing for Touristik Union International.

Bad Ad- Shredded Wheat man diving into “the chlorinated unknown”. This ad just doesn’t finish, it tails off as badly as the man’s dive. The idea is how after eating the actually inedible cereal (have you ever tried to chew Shredded Wheat? It is literally like straw) the man’s son sees his father’s ill -advised antics as heroic. Yet there’s no payoff, no resolution and the melodramatic narrator’s awkward speech works too hard to explain the concept and then just stops. It leaves you thinking- where’s the rest of the ad?.