Call Me By Your Name review

The buzz about this film it is so loud that if, like me, you missed it at the cinema you probably have overly high expectations as to what to expect. It is true that the narrative- adapted from Andre Aciman’s novel- doesn’t really tell a new story but it does tell the most important story. It is simply about two characters who unexpectedly fall in love but whose relationship can never really pan out. Not a new scenario by any stretch yet rarely is it portrayed with a minimum of associated melodrama and overstated movie-isms. 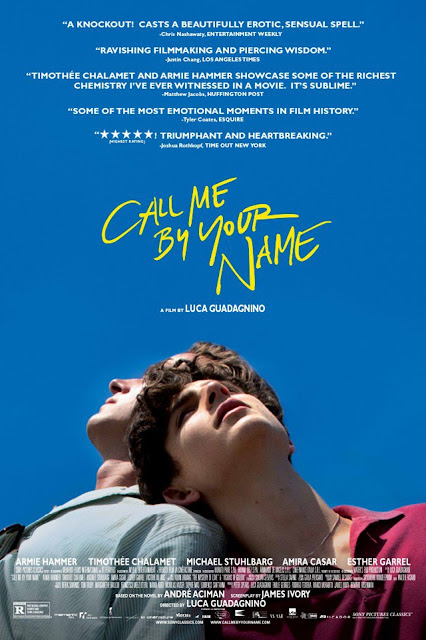 Told across the summer of 1983 in the balmy Italian countryside you can feel the warmth, hear the birds and the creaking of the floorboards in the old house in which it’s set. Random flies pop in and out of shot, the sound mix is so rich that even rushing water or the crackling of a fire sound new. That elemental sensitivity carries over to the way the actors are filmed with scenes that make you feel as if you are there. There is as little artifice as you can get away with. Director Luca Guadagnino shot it on 35mm film (as opposed to digitally) using single lens giving a realistic rhythm to events. In one scene a character cycles out of a gate, another cycles in and then the camera pans around to catch the first character further along the road. It’s the way you might look at things if you were actually there. The countryside is another character really in the film; its gorgeous scenery and sun drenched fields dare these characters to lose themselves. 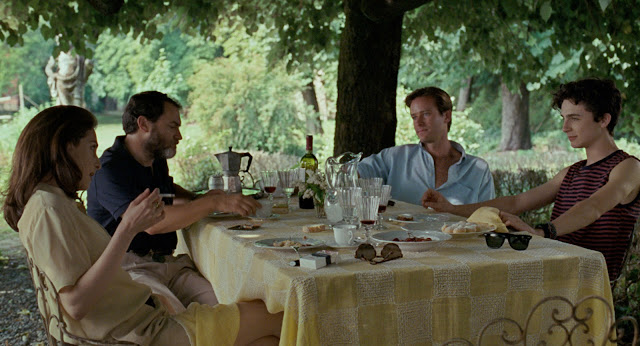 17 year old Elio is a somewhat precocious if not pretentious student who spends summers with his academic parents in a rambling villa. He knows endless facts, various languages, plays the piano and guitar and at one point is asked “Is there anything you don’t know?” The answer of course is that he knows little of love and relationships. He flirts with local girl Marzia but the arrival of an older male intern Oliver seems to be a spur to take that further as if to impress the newcomer.


The two don’t get on at first. Elio seems increasingly irritated by the older man’s acceptance by everyone else especially his own family yet is also intrigued by his flightiness. Oliver steps out of conversations and finishes meals with a brusque “later” and this, as actor Armie Hammer who plays him says, seems to be his way of keeping important issues locked away. Their relationship thaws after the discovery of some new artefacts with which the narrative draws a distinct line over the explicitness of the statues Oliver is looking at on a set of slides and the feelings he is hiding away.


What follows is partly an intellectual courtship that verbally dances around the point, is continually shut down by one or other party while the director keeps the film on that level even when it goes further. This results in a trail that becomes ever more intriguing and even when the subject is broached by the duo it is in elliptical terms. 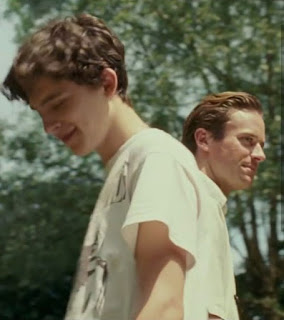 There were apparently some disagreements with the producers over the fact that any sex scenes are not explicitly shown (unlike say in God’s Own Country) yet this seems in keeping with the characters as presented here. It is surely true that most people find full on sex scenes of any sort in major films boring which is why fewer have them nowadays. There has also been some controversy – some of it due to the current representation furore- that surely these roles should have gone to gay actors. This seems to somewhat undermine the intent of such campaigns – are we saying in that case that only straight actors should play straight characters or that gay actors should only take gay roles? That just seems ridiculous- the best actors can play anything and convince. Besides it is not entirely clear whether both or indeed either character is wholly gay.


For the lead actors though to totally convince in this scenario that have to give their all and they do. Timothee Chalamet is American despite the name yet also possesses that continental ability to express nonchalance and disdain that flips instantly to delight. He brings just the right level of performance to Elio, nothing too melodramatic yet keeping us tuned in to the character’s every change of mood (of which there are many). What both characters share is an outwardly assured confident exterior while hiding insecurities. Armie Hammer’s breezy Oliver just shows hints of that vulnerability but he knows this relationship is not going to last. It helps too that Hammer seems to talk faster than any actor!


Unlike some similar films which seem too eager to reach the heartbreak, this one dwells a little on the joy of their covert relationship. The film is essentially sensual rather than sexual and it’s the whole package- the two seem deliriously off centre when together alone as if weights have been lifted from them especially during a road trip that finishes the summer. The director has said: “The whole idea of the movie is that the other person makes you beautiful—enlightens you, elevates you.” Therein lies the unusual title which refers to the way that a relationship can become so intertwined. A measure of the film’s success in this respect is in persuading the audience that they don’t want this summer to end. 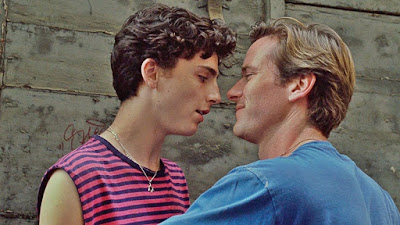 Inevitably there is a parting of ways but it’s nothing more dramatic than Oliver having to go back home. This shows how differently each is affected- for Oliver it is sad but there you go. For Elio it is devastating in the way that this could only be for a teenager and here is where we can all relate I think. Or if you can’t you were / are a very lucky teenager!


After two hours and in a winter set final act when you think the movie has played its full hand and you’re feeling sorry for Elio comes an unexpected, stunning monologue from his father. Michael Stuhlbarg delivers this with an honesty that will take your breath away and the sentiment it espouses is something everyone will wish they’d been told when they were seventeen. Perhaps it is the only moment when you are aware this is fiction because surely few parents reaction to the turn of events would be quite so idealistically enlightened or if it was they probably wouldn’t express it so openly. This scene has deservedly become much talked about and the actor deserves the attention as his role to this point is unashamedly academic. It also brings into focus why the character seemed to take to Oliver.


And the film isn’t done yet concluding with a very long shot as the credits appear of Elio staring into the fireplace expressing a number of different emotions without a word. I am wary of the elevation of Timothee Chalamet to God like status but I have to say this wraps up what has been an incredibly skilled, nuanced performance. In busy, tech dominated 2017/18 it’s refreshing that a film so quietly powerful can make an impact. Apparently there is a sequel in the works but I’m not sure about the idea. This is a perfect package as is. 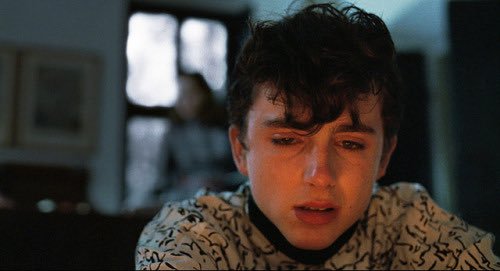 Email ThisBlogThis!Share to TwitterShare to FacebookShare to Pinterest
Labels: Armie Hammer, Call Me Back Your Name review, Call Me By Your Name, Films, Luca Guadagnino, Michael Stuhlbarg, Timothee Chalamet