An unlikely sounding though true story of how Oscar winning actress Gloria Grahame fell for a younger actor from Liverpool called Peter Turner. Based on the latter’s book the film works up the slim story into something substantial by virtue of two excellent performances and some cinematic devices along the way. It’s the late 1970s and Turner is in London digs into which Gloria moves while starring in a play. Soon they become more than just friends, the large age difference seeming to make no difference as her zest for fun and his mischievous calm seem to meet in a perfect place. They bond initially over disco dancing and end up as lovers and more. 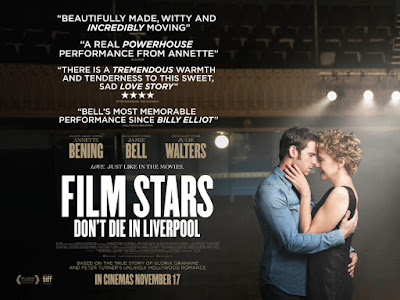 The story is told by starting in 1981 when she turns up at the Turner household after some argument between the two happened back in New York. It soon transpires she is unwell and during her stay Peter reminisces about key moments in their affair. The way this is presented fits perfectly with a story of actors with scene changes that suggest a certain movie style. Several sequences appear to use the sort of rear screen projection with which the real Gloria Grahame would be familiar while others transform the action through time simply by Peter literally opening a door into the past. While these choices may detract for some I think they enhance a story that is all about acting in one way or another.
Visually this period saw Liverpool at its lowest ebb which I well remember and director Paul McGuigan seems to suggest a similarity between the once great city and the formerly huge star. Apart from one tiny error that shows very modern paving in front of the Playhouse theatre he gets the period detail - at least as anyone recalls it- spot on. Especially strong are the interiors of pubs and houses which definitely have the whiff of brown and dark red that could only be from this period. Also I love the way McGuigan always shoots Gloria as if she’s making an entrance using lighting- even if it’s in a small house- to accentuate her star quality.


The two leads who have a real chemistry together. Annette Benning brings exactly the right kind of faded glamour to the role of Gloria, always performing, always egocentric yet also fragile and wounded. She is so good you feel it would be great if she did a biopic of the actresses entire career as Gloria already had quite a packed life before she meet Peter. If you look at her biogs online too you’ll see she was possibly the first advocate of #timesup when you find out just how badly she was treated after she refused some demands made of her and was effectively blacklisted by Hollywood. Somehow it seems like that is an even more intriguing story. 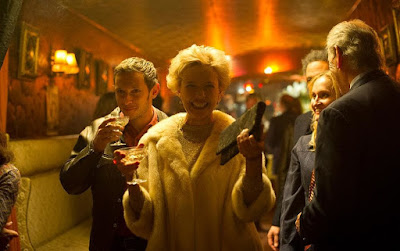 Jamie Bell has never been better with a spot on Scouse accent and attitude that non Liverpudlians rarely manage without parody. One key sequence aside, the narrative is mostly told from his point of view allowing the actor to give a disarming natural performance, a calm to the kinetic Gloria. If the idea that they were a couple sounds far fetched the actors and the script convince us that they do work together.


In truth not a huge amount happens and for me the balance of the overall film keens slightly too far towards the tragic outcome of the story. Though this is previewed earlier and introduced in a great repeat of an already viewed scene but from Gloria’s point of view, the denouement has an inevitability and you sort of wish that the movie’s earlier filmic resonances had been employed to allow Peter some dramatic last minute dash to the airport. Of course sticking to real life that didn’t happen.


This is a clever but subtle film that seems to have passed many by but is definitely worth seeing for two excellent performances and the idea that though it sounds like fiction, this all happened!