Reviewed by Chris Arnsby. Gary Davies: "Hello, good evening, and welcome to Top of the Pops. The last time I was with you was just a few weeks ago. Tony, when were you last with us?" Tony Blackburn: "The last time I was here Vera Lynn was at number one in the charts, Gary." Gary Davies: "Well at number five in the charts at the moment it's Bananarama." Tony Blackburn: "Na Na Hey Hey Kiss Him Goodbye."


[5] Bananarama:  Na Na Hey Hey Kiss Him Goodbye. Gary Davies is trying to make a hilarious joke, but the boring answer is that Tony Blackburn last appeared barely six months ago on the 30/9/1982 live edition for the 15th anniversary of Radio 1. Before that he really had been off for a while having last hosted a show on 05/04/1979. Unusually Gary Davies and Tony Blackburn are standing in front of the projector screen (on the left hand side of the main Top of the Pops set) rather than in front of the neon logo (on the right of the set) where hosts usually start the show. The reason for this change seems to be so that the Director can set up a shot that pulls back from the hosts to Bananarama. It also means we get a better than normal look at the DJ's exit routine. Davies and Blackburn both turn, place their microphones carefully on the floor, and then leave via the side of the set. During the Bananarama performance a studio microphone is left on and at various points someone (Floor Manager, Tony Guyan?) can be heard shouting instructions. "Get your hands down, is yelled at one point. Followed later by the contradictory, "wave your hands in the air." Make up your mind. Later there's "let me see you clapping, hands in the air," as, presumably, instructions come down from the Director that the audience aren't pretending convincingly to have fun. (John- And they were always careful the viewers never saw the electrodes) 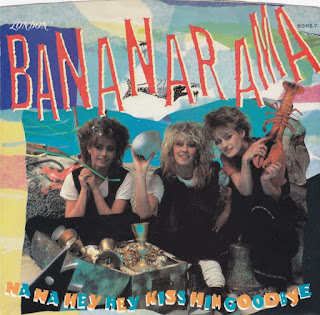 [6] The Style Council: Speak Like a Child. Filmed in the snow covered Malvern Hills. It looks cold. Ideal weather for driving around in an open-top bus. The Style Council have to keep ducking low hanging branches as the bus drives along; more attention should have been paid to planning the route before the start of filming. 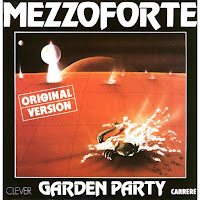 [29] Mezzoforte: Garden Party. Mezzoforte have come all the way from Iceland to play their record which sounds like the theme to a nineties mid-morning programme. Tony Blackburn claims their album costs £15 in Iceland; that's nearly £50 in modern money.


[30] Ultravox: Visions In Blue. On video. Midge Ure is lit blue while maidens frolic in their scanties. Later they put on more clothes for some Flick Colby style ballet.


[21] Bucks Fizz: Run For Your Life. At the start of the performance the camera tracks from a disco ball across the top of the studio and round to the front of the stage. The high angle reveals a man lurking at the back of the set apparently squeezing forwards to reach something under the rostrum. Whatever can he be doing? Sadly the camera never gets to the same angle again and there's no way of knowing if he was there for the whole song.


28] Joan Armatrading: Drop The Pilot. Joan Armatrading hasn't been on Top of the Pops since 1976. In other news Gary Davies has trouble escaping from the set. When Joan Armatrading begins to sing he nips along the back of the set and realises he's gone too far. After a swift u-turn he spots the stairs he missed earlier and ducks out of shot. 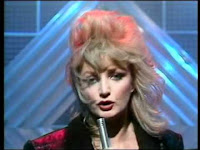 [1] Bonnie Tyler: Total Eclipse Of The Heart. A performance so epic it requires two dry ice machines and a fan to give it the appropriate atmosphere. The windswept nature of the stage seems to be giving Bonnie Tyler some problems. She has to duck out of shot a couple of times to deal with hair that gets plastered to the right side of her face.
[4] Forrest: Rock The Boat. "Top of the Pops next week presented by David Jensen and John Peel," says Gary Davies. "Yes indeed," agrees Tony Blackburn, "but we won't be here on Thursday," WHAT? "we''ll be here on Wednesday just for one week." Top of the Pops... moved...Isn't this one of the eight signs of the apocalypse? What could possibly justify snatching Top of the Pops from it's natural home on Thursday night? Believe it or not it's A Song for Europe 83.  Yes, I wasn't impressed either. Top of the Pops moved so that viewers at home can choose between eight songs that all sound awful. I'm Never Giving Up performed by Sweet Dreams. I'm Going Home Performed by Sam Childs. All Around The World performed by Stuart Slater. With Love performed by Casablanca. We've got all the time in the world performed by Mirror. Love On Your Mind performed by Audio. When The Kissing Stops performed by Rubic. Keeping Our Love Alive performed by Ritzy.  Luxembourg won with Si La Vie Est Cadeau (it is the life of the..um..hat (probably)).