The return of milk bottles!


It’s funny how we’re often told that such and such a thing will be obsolete by a certain date and yet somehow it endures. Vinyl was a recent one; a seemingly moribund format that has enjoyed quite a revival in recent years. Now one of the most surprising rebounds turns out to be….milk bottles! You wot? Yes, milk bottles. For the past twenty years people in the UK have increasingly bought their milk in plastic containers from shops. It’s cheaper and more convenient because you can just chuck the container away in the recycling bin afterwards. However it now turns out that far too many of these plastic containers end up in the sea becoming a pollutant. None other than Sir David Attenborough, the nation’s wisest man warned in Blue Planet 2 about the harm caused by disposable plastic products and this has helped fuel large numbers of people reverting to having their milk delivered in glass bottles. It’s not just Sir Dave of course, the trend back towards glass bottles was already underway due to an increased awareness of the environmental dangers of plastic containers. 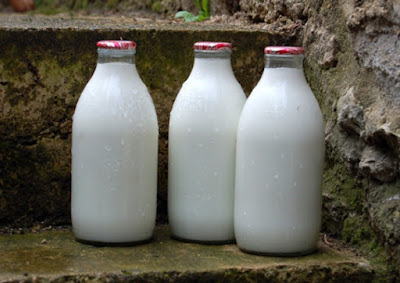 I reckon milk tastes better if it’s been stored in glass however the bigger advantage is that the bottles are re-used again and again. Ok so they are slightly more expensive –though carton milk prices have been creeping up lately and in some cases are higher than bottles. And are cartons really more convenient? You have milk in bottles delivered to your house whereas you have to go to a shop to buy cartons. Yes you have to wash the bottles out but people these days are much more obsessed with washing things so one or two more bottles a day is not going to make much difference is it?


Perhaps the next development- and retailers may be less happy to hear this- is that shops start to sell bottled milk and you can take the bottles back which are then collected from the shop by diaries and re-used. In fact this goes back to how things used to before milk deliveries. It would encourage people who leave the house too early to take milk in to still buy bottles.


Once upon a time milkmen would drive around in a horse drawn cart and rather than use bottles would fill people’s own milk jugs when they delivered. The earliest known patent for a glass milk bottle was in New York in 1884. Some of the early milk bottles with dairies names embossed into the glass and with specially designed tops are now valued items for which some collectors will pay up to £100 each for. Bottles were round before the 1930s after which they became more square while the shape used now, rather unflatteringly referred to as “dumpy”, originates from as recently as the 1980s.


The milkman himself- and it always seemed to be a man- became the subject of urban folklore, notably when women often stayed at home rather than worked. Jokes about milkmen peaked in the 1970s when Benny Hill enjoyed a hit single with a ditty about a milkman called Ernie. Joking aside, the milkman was part of the social fabric in a time when people were more community minded. You could always guarantee that the milkman would be aware of all sorts of things happening in your area. And it’s a hard job too with most milk delivered to doorsteps before 7am in all weather conditions. 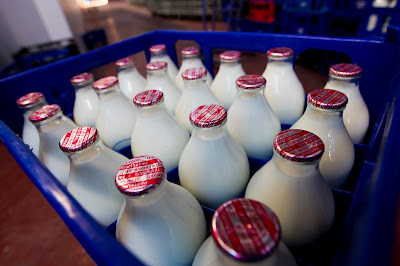 However as convenience shopping grew, doorstep milk deliveries and the glass bottles that came with them went into decline. In the mid 1970’s around 75% of milk came in bottles, whereas by 2012 this figure had dropped to just 4%. The diaries tried to keep their customers by offering all sorts of other items such as orange juice, bread, yoghurts and so on.  Rising pieces and changing work patterns played their part but there came to be a sort of acceptance that chunky heavy milk bottles were old fashioned and people seemed to resent having to get the aluminium tops off even though it is easier than trying to unseal those covers on the plastic ones. As for the health angle, glass milk bottles are not just washed, they are properly sterilised before re-use and electronically scanned for cleanliness. Milk is liable to stay fresher and last longer if it’s stored in bottles especially if left for ages out of a fridge as people seem to do with plastic ones.


This year there have been reports from all over the country about diaries increasing their doorstep deliveries by hundreds of customers each to the point where some are taking on more milkmen. Dairy UK have said that doorstep deliveries have risen by a quarter in the past two years.  Anecdotal evidence suggests the main groups changing to having doorstep deliveries are older people who remember the method from their childhood and so called Millennials whose awareness of environmental issues drives many of their buying decisions. You can even buy you own glass milk bottles.


It’s unlikely that house deliveries of milk will ever return to what it was back in the 1960s and 70s however selling milk in glass bottles across all outlets could become the new normal within the next decade.