The Death of Stalin review


Armando Iannucci’s inspired reading of real life events following the 1953 death of the USSR’s legendary leader boils down the power struggles that ensued amongst his Central Committee colleagues to a level roughly equivalent to student politics. With killing. The portrayal of the committee members reminds me of those US films about student council elections where vanity and greed is as much drivers as power and with a cast well versed in this sort of comedy the film can’t go wrong. That the Russians banned the movie suggests it hit closer to the truth than they might admit. That neighbouring countries followed suit also suggests that some the apparatus of intimidation employed back in the 1950s is still standing. 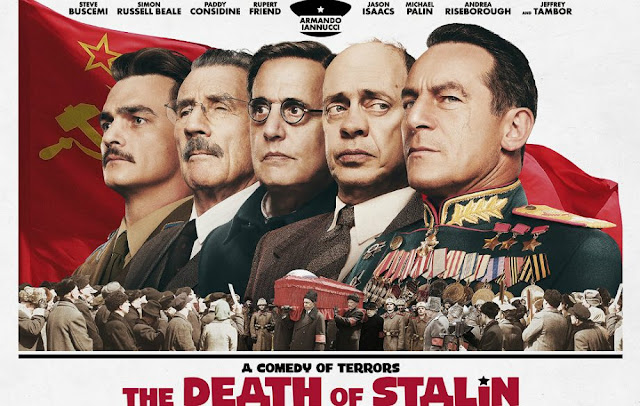 They say you can turn anything into comedy and The Death of Stalin from its premise to its execution is proof of that. Anyone easily offended may find the tone somewhat macabre particularly as one of the stand out scenes involves some nasty surgery yet this is not a film out to shock at all. Instead Iannucci and fellow scripters David Schneider, Ian Martin and Peter Fellows taking from a source French graphic novel set out to poke fun at the pomposity of power and the seething resentment that lies underneath it’s trappings. So the film is as much as a farce as anything, indeed some of the funniest moments arise from things like trying to manoeuvre Stalin’s body from one room to another or the misunderstandings between underlings. Some of the best moments occur even before we’ve met the main cast as Paddy Considine’s radio station boss receives a phone call from Stalin himself and ends up desperately trying to re-stage a concert that’s just finished. Later there’s a real laugh out loud sequence where one of the committee is trying to change places at an official event as Stalin’s  body lies in state. Even something as familiar as several cars trying to get out of a drive at once works in the wider context.


The film moves at a pace never confining itself too much to committee meetings and lowered voices instead bringing a physicality to the power struggle while taking its progress from the actual rules surrounding the succession. This is welcome filmic licence as the old USSR leadership often seemed barely able to move! One aspect that works splendidly is the actors being able to use regional English dialects instead of faux Russian ones. This emphasises the regional and political differences amongst the committee. And I bet the present day Russian audience were none too pleased to find an American actor playing arch Russian manipulator Khruschev. 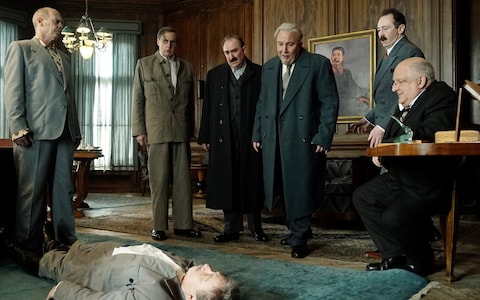 In terms of how to turn actually quite serious events into comedy, the film balances matters extremely well. While often finding the circumstances absurd and contradictory and there are several scenes where decision making is seen as fluid and arbitary mainly based on who can bully the most! However the film never shies away from the consequences yet they are often implied rather than seen with use of careful cutting away from mass shootings.


The casting is immaculate not just in the main roles but right down to characters who have one line or less! Steve Buschemi brings his customary fire to the role of Khruschev while Simon Russell Beale’s Shakespearian heft is well suited to the burly bullying Beria. Other stand outs in a brilliant cast include Jason Isaacs' no nonsense General Zhukov, Jeffrey Tambor’s ineffectual Malenkov, Adrian McLoughlan’s briefly seen but excellent Cockney Stalin and Andrea Risborough as Stalin’s firebrand daughter Svetlana.


This is probably not the film for you if you are easily offended (or Russian) but it is a movie rich in dark satire and golden comedy moments; another glittering bauble in Armando Iannucci’s inspiring career.