Reviewed by Chris Arnsby. John Peel: "Hail Reptilicus. Come you from our legions in Gaul?" David Jensen:"Get off! It's Top of the Pops. And here's Freeez to kick off with Pop Goes My Love. Let's get down."
[33] Freeez: Pop Goes My Love. October? Already? The autumn nights draw in so quickly. John Peel and David Jensen have raided the BBC dressing up box for Roman gear; they've also been cowboys and gangsters in1983. If the pair can sneak into the Doctor Who costume box they can dress up as Sea Devils, or the big snake from Kinda. Freeez are rubbish. They've annoyed me by having a name that's difficult to type; variations I've managed in the last ten minutes include Freeze (obviously), Freez, and Frezee. I refuse to do any research on Frieze. It's more charitable to assume that they're a stray Euroband dragged across the Channel in the wake of Ryan Paris. The lyrics of Pop Goes My Love show all the signs of hasty translation from Estonian. It's like taking a romp through the big book of pop clichés. "After living with you for years and years/Through loving and hating, through laughter and tears/A change in the weather, a calm before storms/Without any warning, the dark before dawn." And that's just the first verse. The chorus starts "one, two, three," and a nation waits with bated breath to hear what comes next. "Four, five, six." Bah! I dismiss thee Frrzze. Back to San Marino with you. 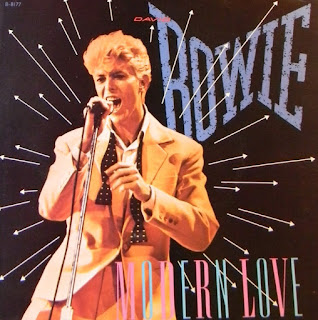 [26] Depeche Mode: Love In Itself 2. The Top of the Pops audience are feisty, or at least the cheerleaders are. They keep going "woo!" at random moments through Depeche Mode's performance. There's nothing obviously spectacular going on to justify this level of enthusiasm although Martin Gore could be turning somersaults whenever the camera is off him. There's a particular chorus of "woos" and handclapping during a synthesiser solo, so maybe everyone's just fans of parping keyboards. Alternatively Brian Whitehouse (credited with Production again) is sitting in the gallery growling "more fun. Make it sound like they're having more fun."
[28] Meat Loaf: Midnight At The Lost And Found. Murky uninteresting footage which turns out to be borrowed from The Late, Late, Breakfast Show (it's on Youtube). The Top of the Pops clip ends as Meat Loaf clinches with the backing singer in pink hotpants. The Late, Late, Breakfast Show footage continues on a lengthy freeez frame before Noel Edmonds gallently rushes across the studio yelping "come on, put her down." A brief interview follows before the Youtube clip confusingly cuts to the start of the video for Safety Dance while Noel burbles about Chas & Dave. I think that's more to do with the content of the original VHS recording than any attempt at Brechtian editing by the Vision Mixer.
[24] Nick Heyward: Blue Hat For A Blue Day. Meanwhile back in the Top of the Pops studio here's Nick Heyward looking all winsome. Ken Macgreggor, Lighting, has remembered to colour Nick Heyward blue, but not everyone in the production team is on the same page. Anne Harding, Costume, has failed to provide a (blue) hat for Nick to wear. Although that would run the risk of mussing up his lovely hair. This is when I miss Flick Colby. I'm sure we can all imagine the routine Legs & Co would have performed. They could put their hands on their heart and do that mock crying gesture and pretend to be sad. Legs & Co would definitely have worn blue hats. In fact there's a good chance that a communications failure would have resulted in at least one of them dressing as a blue cat.
[13] Howard Jones: New Song. Howard Jones is on 16mm film with Dancing Jeb. Best bit; down in Holborn Station (in the now disused branch line to Aldwych) Howard Jones walks into a passage clearly labelled No Exit. The rebel.
[38] David Grant: Love Will Find A Way. The Cheerleaders are getting raucous again. The start of David Grant's performance is the cue for lots of whoops, hand clapping, and someone shouting "go on David do it." More fun! Sound like you're having more fun you scum! Brian Whitehouse demands it!
[19] The Alarm: 68 Guns. A song so exciting the camera has to charge across the studio at the start.
[10] New Order: Blue Monday. Astonishingly Blue Monday remained in the top 100 for 38 weeks after it's release in March 1983; this is week 31 and it's going up again. The song dipped to number 82 in the chart of 23/07/1983 and then climbed slowly through August and September before nudging back into the top 20 in the chart of 24/09/1983. It's going to stay in the top 20 until 12/11/1983 and will finally dip out of the top 100 at the start of December. Don't worry if you missed it because it will be back in the top 100 in early 1984, and stay bubbling around the bottom of the top 100 for another 11 weeks until March 1984. What better way to celebrate Blue Monday's new success than a repeat of the ghastly live performance of 31/03/1083? Here it is to enjoy again; savour those oddly off key notes, the sparse vocal, suppressed laughter, misplaced sample, and gradual creeping embarrassment of all concerned.
[1] Culture Club: Karma Chameleon. In comparison, Karma Chameleon could only manage a wimpy 21 weeks in the top 100. Although 6 of those will be at number 1. It's down all the way once it leaves the number 1 slot, except for a brief leap from 35 to 30 in the chart of 07/01/1984. Presumably people went out and brought it for their Christmas and New Year parties. This performance is a repeat of the one from the 22/09/1983 edition.
[29] The Rocksteady Crew: (Hey You) The Rocksteady Crew. Audience dancing and closing titles.
Posted by John Connors at 22:21