Reviewed by Chris Arnsby. Peter Powell: "Hello Everybody! Welcome to the biggest pop party in Britain! It's Top of the Pops of course!" Andy Peebles: "Good to have you along. Let's get straight under way with a record that I reckon could be big at the CUC conference in Blackpool. Heaven 17 are in the chart with Crush By The Wheels Of Industry."


[28] Heaven 17: Crushed By The Wheels Of Industry. Andy Peebles is having a bit of an off day; CUC conference should be TUC conference; and he's dropped the -ed from the end of the word crushed. These mistakes are dutifully logged by the person writing the BBC4 subtitles, which is odd because previous Top of the Pops subtitles have reflected what the person should have said, rather than what came out of their mouths. Presumably the subtitling policy is that there is no policy, and it varies depending on who is doing them. The lyrics of this Heaven 17 song are a bit all over the place. Are they for or against people being crushed by the wheels of industry? The lead singer has a beaming smile on his face so I assume he's pro crushing? One of the dancers behind Heaven 17 does some robot dancing which fits with this song. His name is Phillip Tan, and more on him later. 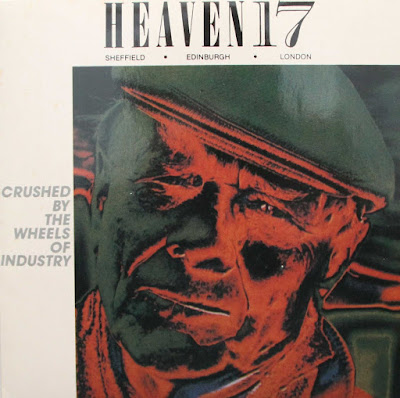 [3] Rod Stewart: What Am I Gonna Do (I’m So In Love With You). Rod's on video, on a posh boat. Location aside this is exactly the same as all other Rod Stewart videos. Rod and the band mucking around and pretending they are great rock mates, etc.


[34] Annabel Lamb: Riders On The Storm. Gone from the BBC4 edition. Why? Who knows. The BBC has a blanket music agreement with a group called PRS for Music which allows registered songs to be used in television programmes. The Doors don't appear to be part of this scheme; along with Journey, Michael Jackson, and Neil Young. Now Neil Young has never really troubled the UK charts but Michael Jackson's been on Top of the Pops a couple of times. And what about all those legendary visits Journey made to Top of the Pops with songs like... One appearance ever you say? A clip played as part of J-n-th-n King's US Chart Rundown on the 03/12/1981 edition you say? Edited out by BBC4 and never repeated you say? Oh well. That's show business. The difference here seems to be that Michael Jackson and *cough* Journey are big popular names singing their own songs. It's worth the time and money to sort out an individual licence. If poor Annabel Lamb only appears once with a cover version it's just not worth paying The Doors team of (highly respected) lawyers for a licence. If Clem Twit and The Twerps appeared on Top of the Pops one week with their version of Thriller, then BBC4 would probably excise that as well.


[24] Status Quo: Ol' Rag Blues. The snipping of Annabel Lamb (not to be confused with The Cloning of Joanna May) reduces Peter Powell's link to a weird stub. "These two have just got engaged from Dundee! That's cool! This is Status Quo!" Man I hope Status Quo are performing in front of a wall of amplifiers (yes). And I hope the song goes dun, der-dun, dur-dun, dur-dun (yes). And I hope they do that legs akimbo guitar playing stance (yes). And they'd better all lean into the same microphone to sing because they're all great rock mates(yes). I hope they're all wearing denim (yes) Oh, and do you think Rick Parfit will walk up behind Frances Rossi during the first verse and smell his hair? Yes. He will. 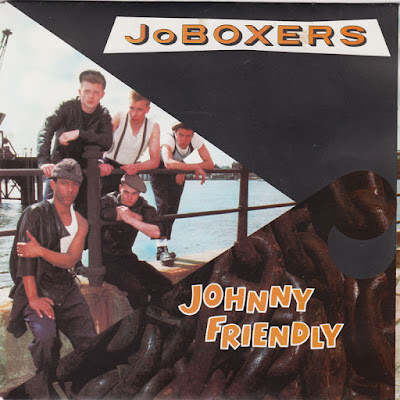 [35] JoBoxers: Johnny Friendly. It's always a bad sign when I search for song lyrics and find they are not available. It doesn't happen often but Johnny Friendly joins the ranks of the untranscribed. It's an odd, lurching, broken backed song which sounds good when it speeds up but never quite comes to life. The decision to make every line of each verse end with "Johnny" doesn't help. It makes the song predictable, and predictability quickly becomes boring. Peter Powell is helpfully wearing a suit this week which makes him nice and easy to spot. In the wide shot at the start of Johnny Friendly you can just see him standing on a stage to the left of shot. He's studying something on a piece of paper; possibly he's swotting up on the song running order.


[21] Ryan Paris: Dolce Vita. It's Ryan Paris! You remember him from last week and the John Peel Eurochart? He's had some movement lessons since making the promo film so he looks slightly more confident in front of the camera. He's also been given a microphone to hold which helps solve the problem of what to do with one of his hands. Unfortunately he uses the other hand to point into the camera like Mikki Disco from The Fast Show. Someone has pulled a dirty trick and put Ryan Paris on a rostrum in front of the Top of the Pops audience. Not the dancers, cheerleaders, and page three models that Top of the Pops likes to pretend is the audience but the real Top of the Pops audience. The gawkers, the smirkers, the shufflers, and the troublemakers. Is this some sort of hazing ritual for new acts? Ryan Paris comes under near continuous and sustained streamer bombardment but acquits himself well. 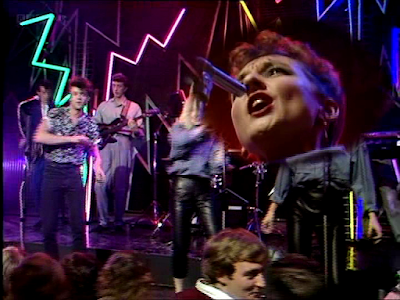 [29] Paul Young: Come Back & Stay. Paul Young is outshone by his two backing singers. (John- aka The Fabulous Wealthy Tarts. Really) They have spent weeks drilling their dance routine and Paul Young is simply too static to compete with their rigidly synchronised arm waiving. Each time the two backing singers appear on screen the eye is automatically drawn to their semaphore movements. It's mesmeric. Later, during the instrumental, the head of one of the singers is vignetted over the main picture. An unfortunately timed camera movement results in the giant floating head obscuring the top half of Paul Young as if Vision Mixer Hilary West is joining a conspiracy to make him a supporting artiste in his own song. The best moment is yet to come. The camera movement continues until the giant head is superimposed over its own tiny body, and looks like some bobble-headed monster.


[1] UB40: Red Red Wine. On video. The obvious weakness of this promo is that it shows UB40 in the pub downing pints of brown, brown lager. Red wine being unknown in the UK at this point in history. At one point the director realises he's made a tactical mistake and shows a few still images of Ali Campbell holding a glass which has been hand coloured crayon red. It looks like he's downing a pint of ketchup.


[10] Level 42: The Sun Goes Down. Andy Peebles disappears as soon as the camera is off him. Peter Powell is obviously a Level 42 fan and stays until the song is over. Watch out for the new studio dancer; the one robot dancing earlier. Other people on the internet have identified him as disco dancing champion (and future film stuntman, and action director) Phillip Tan and this is his moment to shine. He does back flips. He throws a kick at the camera. He leaps. He spins like a dervish. As the song ends he's balanced in a headstand thrusting his legs out to the side. Coins fall out of his pocket and at the end of the song a helpful audience member collects them off the floor and hands them and a comb back to Phillip. 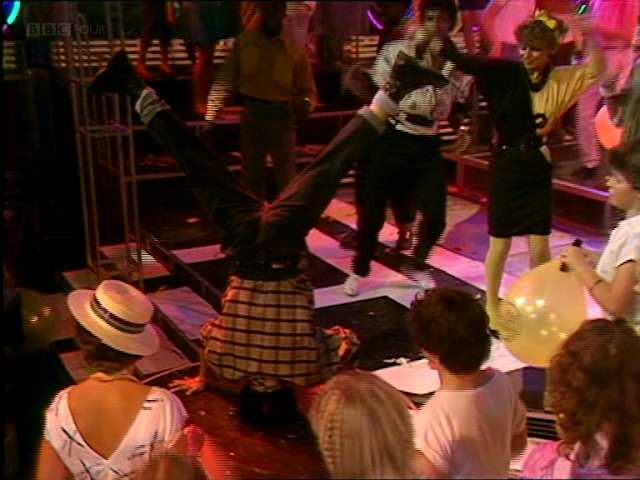